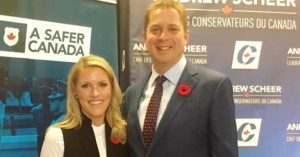 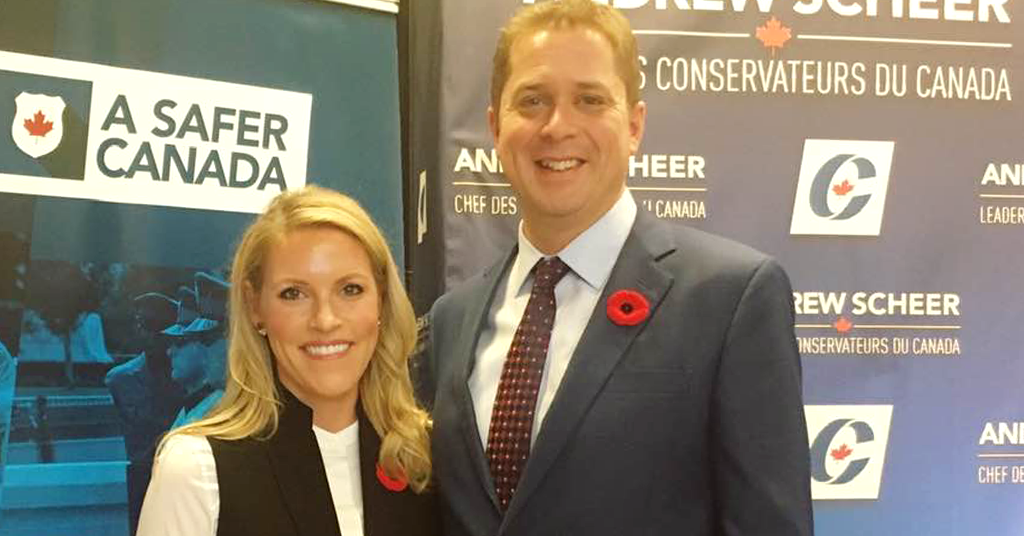 The Conservative Party of Canada’s newly appointed director of communications has strong opinions about “globalists” and “the inception of a new world order.”

Sarah Fischer, a long-time party staffer and 2019 Conservative candidate under Andrew Scheer, announced her new job on Twitter Monday, pledging to work to “make Canada the freest country on earth.”

Within hours, numerous tweets from earlier this year showing the Conservative staffer expressing support for the convoy occupation of Ottawa, including one video of Fischer blowing a truck horn in front of the Rideau Centre.

Fischer echoed this support in numerous posts on an opinion blog she launched in December 2021 called “Uncancelled.”

The blog’s about page describes “Uncancelled” as a “platform where thought leaders pose big ideas, challenge existing ones and have real conversations about the pressing issues of our time.”

A copy of the blog reviewed by PressProgress shows that all its social media buttons link directly to Fischer’s official social media accounts, including ones used during her failed 2019 election campaign. 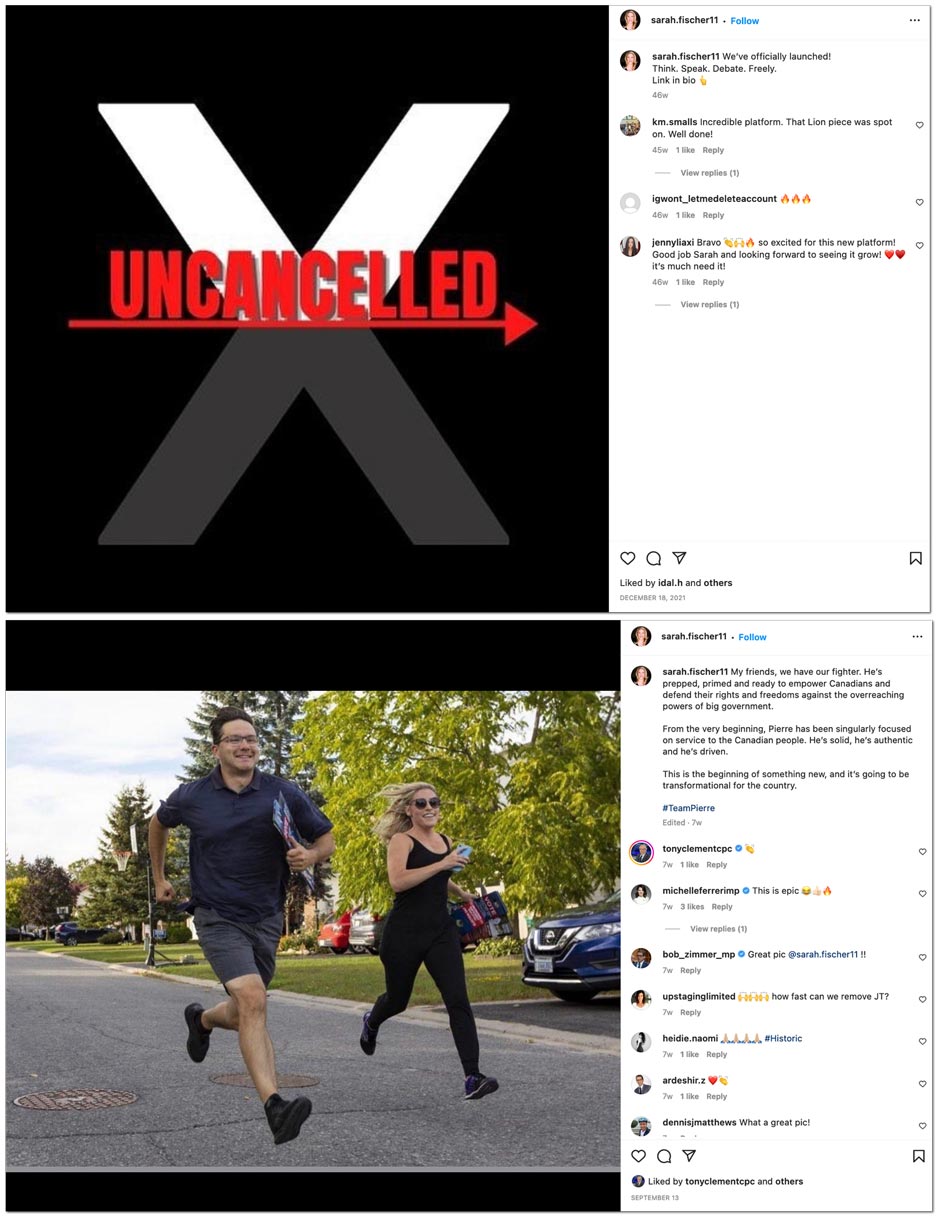 On February 20, Fischer praised the convoy as “glorious” and called occupiers “heroes,” writing: “As I would walk through the streets lined with massive semis covered in signs declaring freedom, I could not wipe the smile from my face.”

On June 3, Fischer claimed “Canada has transformed into a dystopian nightmare where government reigns supreme,” citing “coerced injections under threat of loss of employment.”

Earlier, on May 13, Fischer stated that “Western democracies founded on Judeo-Christian values were set up with limited governments where power was placed in the hands of the people instead of the rulers,” and criticized Justin Trudeau for using the media and education system for “social engineering.”

“If you are not on board with his plan to reengineer this country into one that is ‘moral’ according to his values and beliefs, then you will be left behind,” Fischer wrote.

Social engineering is also a key theme of Fischer’s December 21 blog post, titled “Lamenting for a nation,” which takes aim at an alleged plot between Trudeau, the World Economic Forum and other global leaders.

“Woke defenders of the proposed societal reengineering have labelled its critics conspiracy theorists,” Fischer cautioned readers. “No big surprise there.” 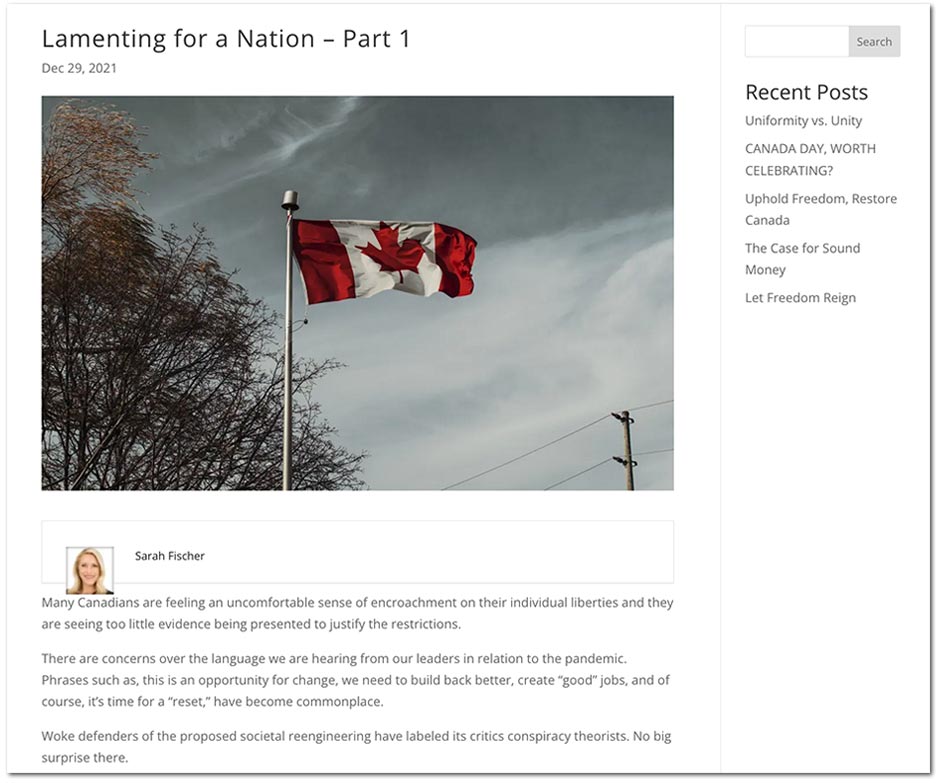 “What is undeniable,” Fischer explained, “is that this thrust towards ‘The Great Reset’, as it were called by Klaus Schwab, the Founder of the World Economic Forum (WEF), is gaining traction worldwide, mainly among those on the left, and in countries where the rule of law and democracy are not upheld as fundamental values.”

“This pandemic has been exploited by the world leaders and influencers who have always dreamed of a more idealistic global economy. Klaus Schwab used the World Economic Forum Annual Meeting in Davos, Switzerland to disseminate the plan. This annual event is a meeting of the minds where ideas are shared among powerful business tycoons, media strategists and state leaders.”

“Schwab, who believes that “Capitalism, in its current form has no place in the world around us,” has not minced words one iota when discussing the need to utilize the perilous times of this pandemic to reset the world economic order,” Fischer added.

“This is not a conspiracy theory,” Fischer wrote. “It couldn’t be more blatantly obvious.”

In her blog, Fischer acknowledges former Conservative Prime Minister Stephen Harper has, himself, attended World Economic Forum conferences in Davos. However, she explains Harper merely attended in order to share “our nation’s triumphs in successfully maneuvering through the 2007-2008 financial crisis” and insisted he was only “helping some other countries who were still struggling.”

Fischer also accused Trudeau of “parroting” the language of the “globalists” in order to “reengineer” the global economy and “appease his global peers.”

“What mustn’t go unnoticed, is the verbiage that our very own leader is using. Prime Minister Trudeau is exercising a form of parroting. Much of his language is verbatim what we are hearing from these certified globalists.”

“I believe there are leaders around the world, including our own, who have bought into this plan to reengineer our global economy,” Fischer added, before concluding: “We have a Prime Minister who is leading our country down a path of destruction to appease his global peers, and Canadians are the pawns being played in this dangerous game.”

In a statement to the Globe and Mail Tuesday, Conservative Party Executive Director Michael Crase said the party stood behind Fisher in response to tweets expressing support for the convoy.

“Ms. Fischer has been active with the Conservative Party of Canada for many years, serving both as a staffer on Parliament Hill and a candidate for our party in 2019. We are very excited for her to join our team,” Crase told the Globe.

Neither Fischer nor the Conservative Party of Canada responded to requests for comment from PressProgress about the blog posts and whether Fischer wished to add any additional context to her statements or clarify her language.

The term “globalist” is widely-associated with conspiratorial far-right narratives and carries antisemitic connotations.

According to the the Anti-Defamation League and others, many of the conspiratorial narratives surrounding the World Economic Forum and the “Great Reset” are similarly rooted tropes with antisemitic origins.