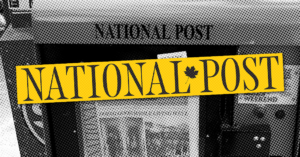 As economists pointed out, the claim was factually incorrect.

The story, which was published under the byline “Postmedia News,” ran under a false headline claiming: “More than 800,000 ineligible people received CERB, at cost of nearly $1.7B, CRA documents reveal.”

Postmedia, the parent company of the National Post and owner of many of Canada’s remaining major newspapers, ran the story in at least 17 of its newspapers.

However, less than 24 hours after it was first published, the National Post changed its original headline to “Tory MP demands answers why 800K non-tax-filers received CERB at cost of nearly $1.7B” without issuing any correction notice..

A few hours later, the National Post pulled the story down altogether, although the story was still viewable on the Toronto Sun and Ottawa Citizen Friday evening.

A “404 missing page” error now appears on the National Post’s website, along with a cartoon beaver who apologetically remarks: “Oops!”

According to Canadaland, dozens of current and former Postmedia journalists have raised concerns about company executives directing “all of its papers to shift to the political right, in an unprecedented, centralized fashion” in recent years.

Postmedia’s story did not quote a single tax or other subject-matter expert, but it did quote one Conservative MP.

Except there was one little problem with that statement — the people who received CERB were not actually “ineligible.”

In case you saw that National Post headline from a few days ago about 800,000 ineligible people receiving CERB – it’s not true. The article’s premise was based on a factual error by the reporter. Detailed explanation below. https://t.co/EaU3coAlDY

Postmedia’s story was based on original reporting from Blacklock’s Reporter, which indicated it had asked Canada Revenue Agency for comment but received no explanation prior to publication about the 823,850 people who did not file 2019 tax returns and received $2,000 monthly CERB cheques.

Postmedia cited Blacklock’s reporting, but presented unanswered questions about their eligibility as if it were an established fact that 800,000 people were ineligible.

In a statement to PressProgress, Canada Revenue Agency confirmed that filing taxes is not a requirement to be considered eligible for CERB.

“For the emergency benefits, there is no requirement for individuals to have filed a tax return,” a CRA spokesperson clarified.

“As such, it would be erroneous to conclude that claims from applicants who have not filed a tax return are being paid out to fraudsters or to non-eligible individuals.”

The spokesperson explained that “income eligibility for CERB is determined based on an individual having earned a minimum of $5,000 (before taxes) in the last 12 months, or in 2019 from one of the following sources: employment, self-employment or provincial benefit payments related to maternity or paternity leave.”

In other words, not filing a 2019 tax slip does not disqualify someone from receiving CERB — it never did.

No, 800,000 ineligible Canadians did not receive the CERB. https://t.co/CbsiTxSek4

In a blog titled “No, 800,000 ineligible Canadians did not receive the CERB,” University of Calgary economics professor Lindsey Tedds explained why the National Post’s facts were completely wrong:

“I mean holy hell you know this is just clickbait with a tidge of knowledge about the CERB benefit. Was tax filing an eligibility criteria? No. Let’s go through this one step by step.

Is tax filing a general legal requirement? Nope, not at all. While there are various corner cases, the most important aspect to tax filing is that only people with a balance owing to CRA are required to file a tax return. What you say? Yes. Legally, filing is required if you owe money. It is not required if you do not. So anyone with a refund owing is NOT required to file and anyone for whom withholding covers their tax bill are not required to file. The fact people do file is more because most people (2/3) are owed a refund and really want it or because they actually do not know the rules or want access to tax benefits like the Canada Child Benefit (CCB) …

Tedds added that “the National Post should be embarrassed at how its bias leads to such disgusting errors.”

Postmedia has itself received $21 million through emergency wage subsidies during the COVID-19 pandemic, although the company recently announced plans to layoff local newspaper journalists despite posting a fourth quarter profit.