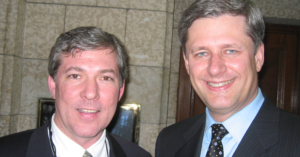 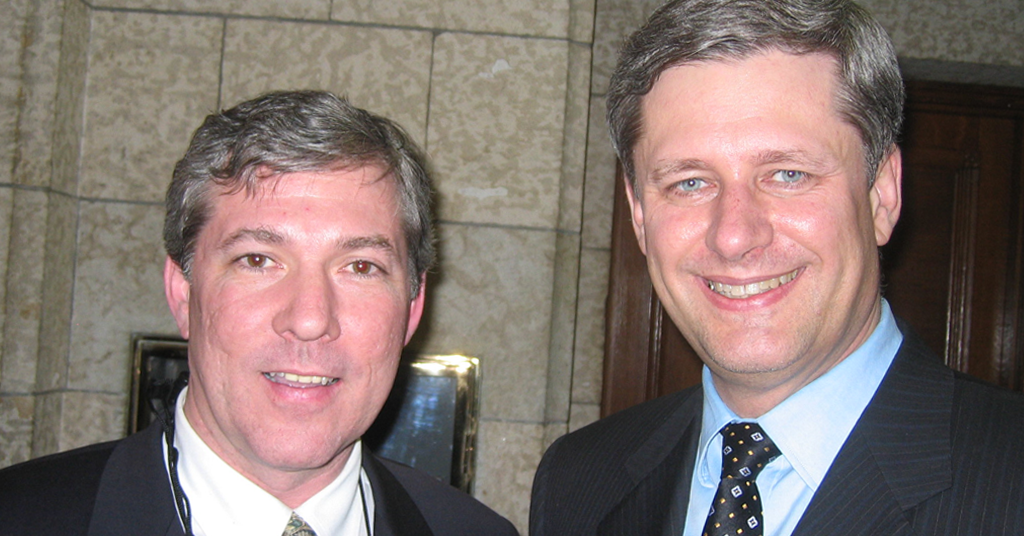 One of Doug Ford’s Ontario PC candidates ran a private career college that was shut down after the Government of Ontario found it ran an unaccredited program, “misled students” and failed to act “in accordance with law and with integrity and honesty.”

Although Bret Snider, a well-connected developer turned Ontario PC candidate, has no details whatsoever about his biography on his official website  or Facebook page, Ford’s candidate in Scarborough Southwest previously owned a private career college called the York College of Industry and Technology.

The YCIT was founded in 1989 and catered to “mature students,” offering “post-diploma programs” focused on “business, technology and language studies.” 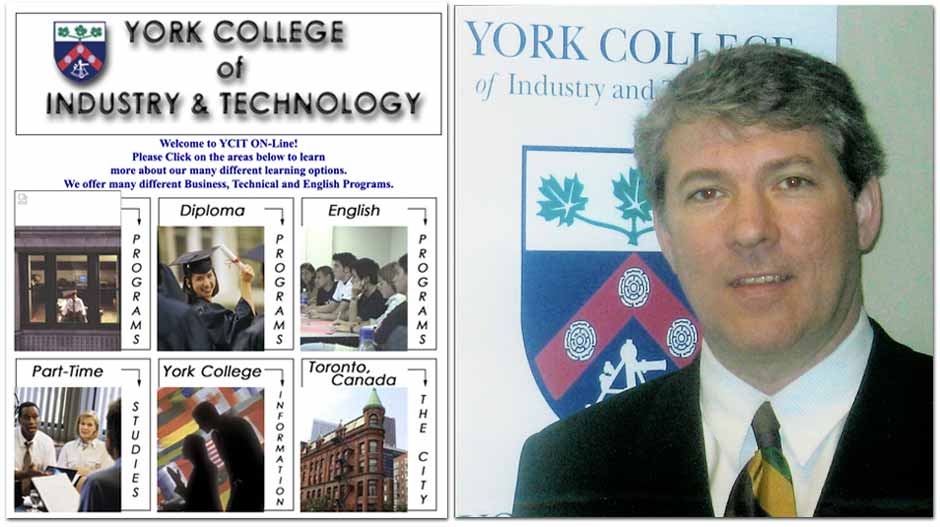 York College of Industry and Technology

The private career college operated out of a Victorian-era mansion that was once the childhood home of former Governor General Vincent Massey.

“A year ago this place was arguably a teardown,” Snider told the National Post in 2006.

The private college was located just next door to an upscale, ritzy steakhouse called “Keg Mansion” in an area along Jarvis Street that Snider and other developers had been attempting to rebrand as Toronto’s “Mansion District.”

But Snider’s private career college suddenly closed without warning in 2007.

According to an Ontario PC spokesperson, the school was shut down “following administrative changes surrounding the approval processes of private career colleges by the government of the day.”

However, a July 2007 notice addressed to Snider from Ontario’s Ministry of Training, Colleges and Universities, shows the private college was served with notice that the ministry was immediately suspending its registration and moving to revoke it permanently. 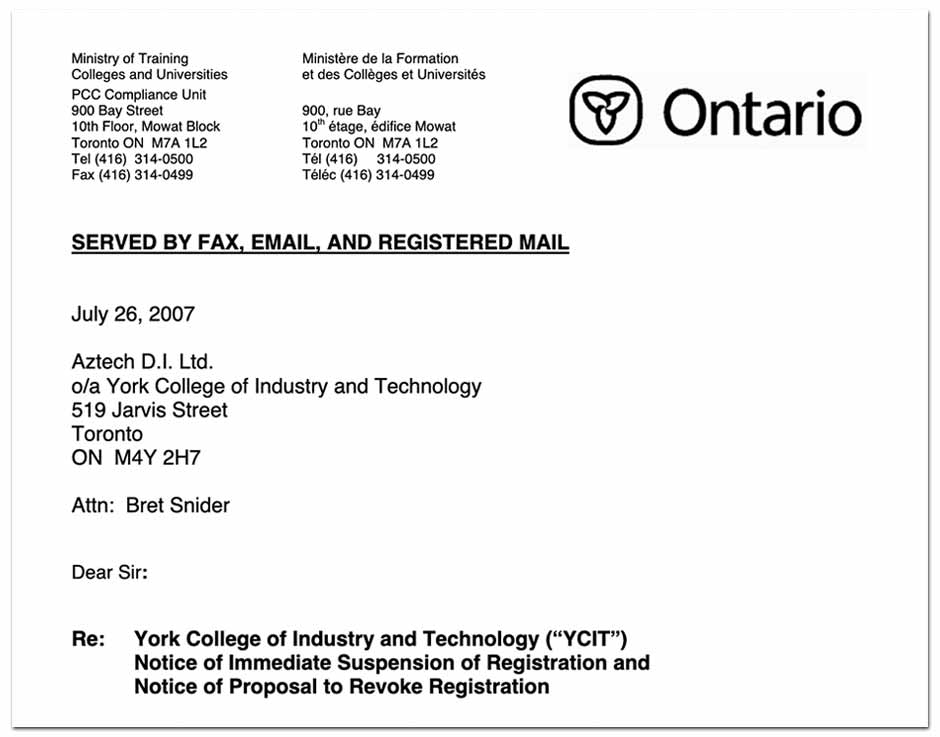 Ministry of Training, Colleges and Universities

“The grounds for my belief that the operation of YCIT will not be carried on in accordance with law and with integrity and honesty and that, in carrying on these activities YCIT will continue to contravene the Act…”

In an attached document titled “facts in support of decision to revoke registration,” the ministry lists a number of reasons for shutting down Snider’s private college, including “no reasonable expectation of financial responsibility,” “reasonable belief that YCIT is not carrying on business in accordance with law, integrity and honesty” and “reasonable belief that YCIT will not be operated in compliance with the Act and the regulations.” 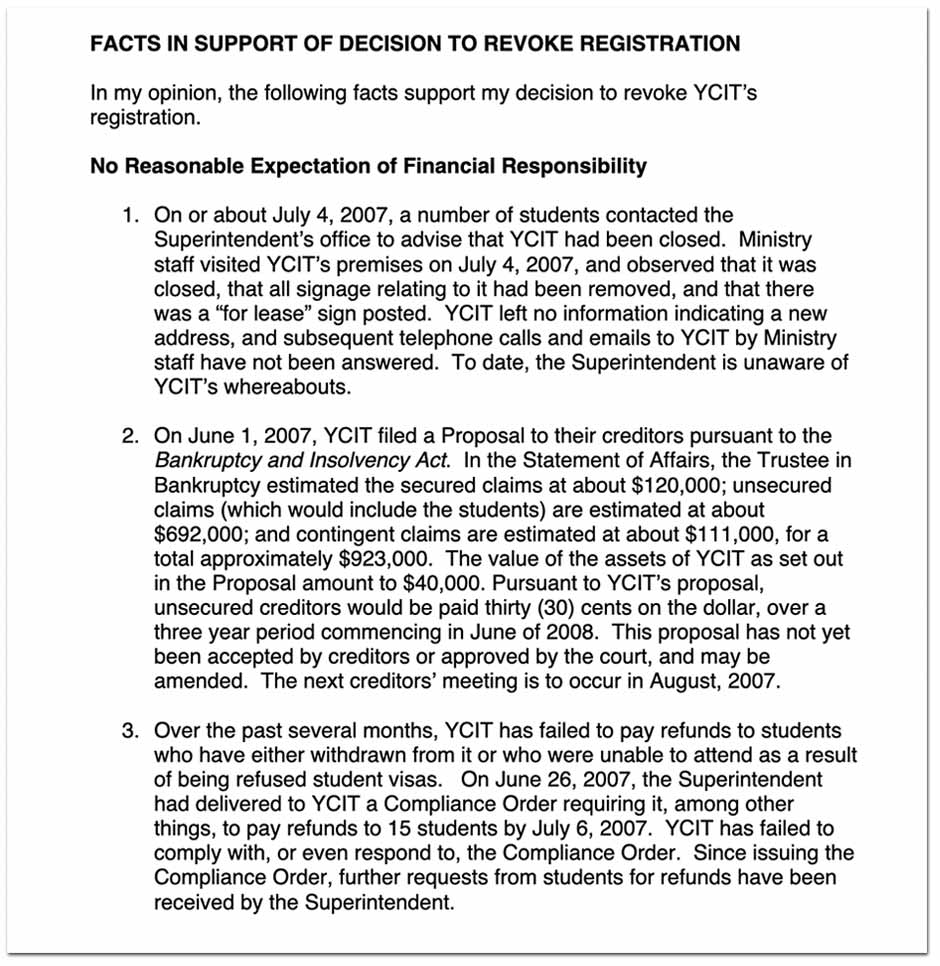 Ministry of Training, Colleges and Universities

It also notes some international students were having trouble getting refunds from the college:

“Over the past several months, YCIT has failed to pay refunds to students who have either withdrawn from it or who were unable to attend as a result of being refused student visas.”

The ministry also noted that although Snider’s college closed its physical campus in July 2007, it continued to offer an unaccredited online program for immigration consultants.

Scarborough residents may wonder how Snider’s past might inform his approach to current challenges facing their community. Hundreds of international students are currently protesting at a different  private career college in Scarborough after Alpha College of Business and Technology left students in limbo, many of whom paid upwards of $15,000 for tuition.

“Private colleges exploiting international students for profit is nothing new, so this does not surprise us,” a Simran Kaur from the Naujawan Support Network told PressProgress. The group is currently supporting students organizing in Scarborough after Alpha College “unenrolled hundreds of students who had paid their tuition.”

“The exploitation we face from colleges, employers, landlords, and the government are all reasons why international students are in a perpetual state of financial distress, insecurity and depression.”

The Ontario PC campaign did not specifically address whether it was previously aware of the ministry’s order or otherwise explain how Snider passed its vetting process.

But an Ontario PC spokesperson emphasized the college was already in the process of “winding down operations” and that it worked with students to issue refunds.

“Mr. Snider was in the process of closing the school and winding down operations when the Ministry’s order was published,” the Ontario PC spokesperson said. “The school worked with all students to find accommodations and/or refunds.”

Despite that explanation, the original 2007 notice found “YCIT failed to comply with, or even respond to, the Compliance Order” and that after “issuing the Compliance Order, further requests from students for refunds have been received by the Superintendent.”

According to a 2007 report in the Toronto Star, former YCIT students enrolled in the college’s online immigration consultant program were unable to receive financial compensation or transcripts after discovering the program was not accredited.

“I can’t go to another school without an official transcript. All I want is a diploma for the $3,500 I paid,” one former student told The Star after the college suddenly shut down, declared bankruptcy and had its registration as a private career college revoked.

Snider provided no statement on his own behalf to PressProgress.