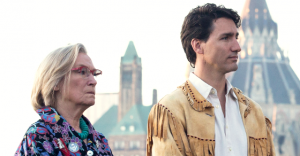 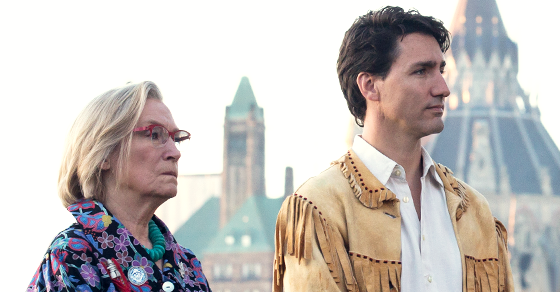 Money the Liberal government earmarked for the well-being of Indigenous children is actually spent on programs to "attract mining investment."

Despite sunny rhetoric suggesting they’re taking a different approach towards Indigenous Peoples in Canada, the Trudeau government is having a hard time backing up its word.

In a recent interview on CBC Radio’s The Current, Indigenous and Northern Affairs Minister Carolyn Bennett boasted that the federal government was spending “almost $200 million” on the well-being of Indigenous children.

Not only is there no evidence​ Canada is spending $200 million, but internal documents obtained through Access to Information by York University’s Anna Stanley and reviewed by PressProgress suggest money Bennett claims to be earmarked for the well-being of Indigenous children is being spent to “attract mining investment” instead.

In January 2016, the Canadian Human Rights Tribunal ruled that the federal government discriminates against First Nations children on reserves by offering up to 38% less in spending for welfare programs.

Then last November, Liberal MPs voted unanimously in favour of an NDP motion to address the funding gap through an immediate injection of $155 million to make up for the shortfall.

Despite this, the government has continued to drag its feet while at the same time touting its record on indigenous rights.

According to the 2016 federal budget, the Liberals allocated $71 million towards “ensuring the safety and well-being of First Nations children” for 2016-2017 – only 54% of what’s required to close the gap:

But during her interview with The Current’s Connie Walker, Bennett suggested “almost $200 million” has already gone out the door in response to the Human Rights Tribunal ruling:

WALKER: So last November, the Liberals—all parliament—passed a motion, an NDP motion on child welfare that called for an immediate injection of $155 million to ensure that the government complies with this human rights tribunal ruling. When will that money start flowing to communities?

BENNETT: The money is already flowing. So in this year, we believe that it’s almost you know—

BENNETT: We’ve got the extra money for Jordan’s Principle with that is allowing 1,500 more kids in care. But we’ve also put money out to each of the agencies to develop their needs, develop their cultural programs. We’ve also increased the dollars to the agencies for their maintenance and those kinds of things.

WALKER: How much of that money has gone out?

As Stanley points out, the only way to square Bennett’s $200 million claim is by including a number of expenditures that have questionable relevance to Indigenous kids.

One “exciting” example Bennett pointed to during her CBC Radio interview was the Liberal government’s investments in “comprehensive community planning” – except the government’s Comprehensive Community Planning Initiative is just a framework for community decision-making, it has no direct impact on the well-being of children.

What’s more, that Initiative receives funding through something called the Strategic Partnership Initiative, a national program designed to “identify emerging economic opportunities.” Internal documents show that the Conservatives put forward almost $16 million towards the Initiative, while the Liberals have committed an additional $5.6 million dollars to keep it running over the next three years.

The internal documents show the Initiative primarily exists “to support … First Nations mining readiness activities” with “added emphasis on individual and community well-being to help reduce barriers to FNs who want to participate in and benefit from economic opportunities.” The documents also suggest the Liberals are proposing to fund CCP from the First Nations Infrastructure Fund from which INAC is hoping to leverage approximately $700,000.

While community planning only represents a part of the Strategic Planning Initiative’s total budget, other spending is exclusively focused on subsidizing natural resource development.

In fact, documents indicate that one “community well-being” project for the Mattawa First Nations in Northern Ontario is designed to improve the “quality of life of First Nations” as a “condition of consent to development,” something that could help “attract mining investment in the region.”

It remains unclear which $200 million Bennett believes has already gone out the door considering the last budget only earmarked $71 million and, of that, parts of it appear unrelated to the well-being of children.

But as Stanley suggests:

“It seems the Liberals are counting spending on a host of priorities that are completely unrelated to child welfare and the spirit of the [Human Rights Tribunal] ruling. In fact, their spending priorities seem to have much more to do with mining and corporate access to Indigenous land and resources.”