Here’s why Manitoba’s healthcare system is in crisis

Nurses are burning out, working overtime and dealing with overcrowded hospitals as Manitobans await the third ER closure since the election of the province’s Progressive Conservative government.

The recent closure of the emergency room at Concordia Hospital, along with the 2017 Victoria Hospital ER closure, and the closure of the Seven Oaks ER scheduled for later this summer, has sparked protests and outrage. A recent assessment report says patient care has worsened as a result of the cuts and will continue to suffer.

The closures are phase two of a consolidation process that set out to ‘find efficiencies’ in the province’s health care system. The government concluded it could save money by closing three emergency rooms and converting them into urgent care clinics less equipped to deal with life threatening situations.

But, even the author of the report which partially formed the basis for the closures says the PC government failed to implement the changes properly. Dr. David Peachy said “all confidence has been lost” in the revamp, and that the government moved ahead without a “timely risk assessment.” That’s meant a staffing crisis and worse service.

Matt Austman, a spokesperson for the Manitoba Nurses Union told PressProgress “the pace at which its happened has been extremely problematic because the ERs they’ve been closing haven’t been replaced with additionally capacity at remaining sites.”

“They’ve created a massive HR and labour relations fiasco,” Austman added. “When you make these changes it creates a domino effect.” 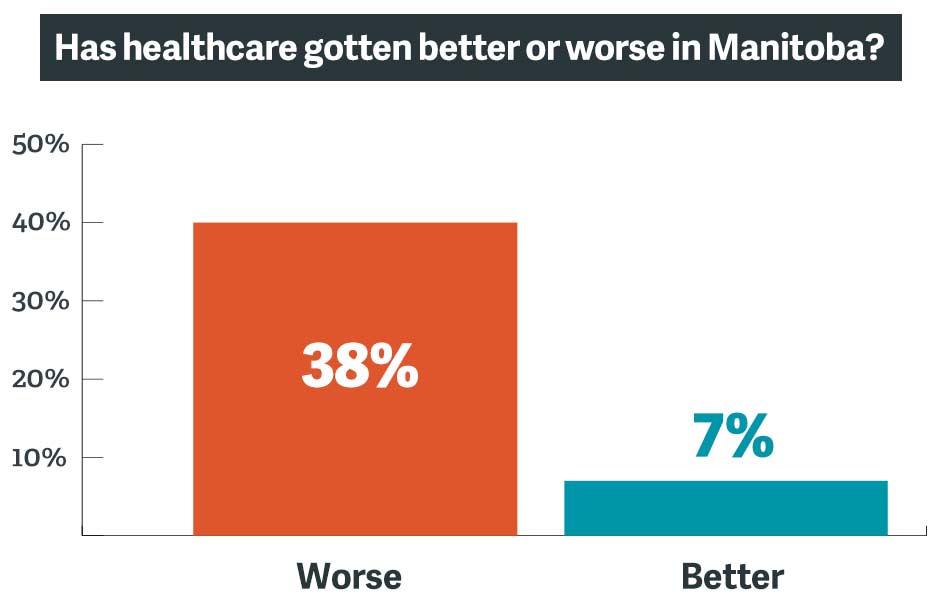 No wonder a recent poll found four-in-10 people in Winnipeg think health services have gotten worse, while only 7% think services have improved in the last year.

Only 20% disapproved of the direction health services were heading when asked the same question in 2016.

According to a 2017 poll, around the beginning of the overhaul, 60% of survey respondents said the plan was about saving money rather than improving the system. 71% said they felt the government was moving ahead with the changes through too quickly.

ER Nurses have seen a 32% increase in overtime hours in 2018 over the previous year. For critical care nurses it was a staggering 71% increase. According to Dr. Peachy’s assessment nurses are afraid of going to work.

A recently retired nurse told CBC the cuts have created a “toxic work environment” due to low morale, stress and pressure to rush patients through the system as quickly as possible.

A KPMG report commissioned by the Manitoba government warned about this. While the report favoured consolidating the services, it also warned the implementation and transition risk was “strongly negative.”