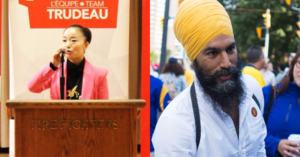 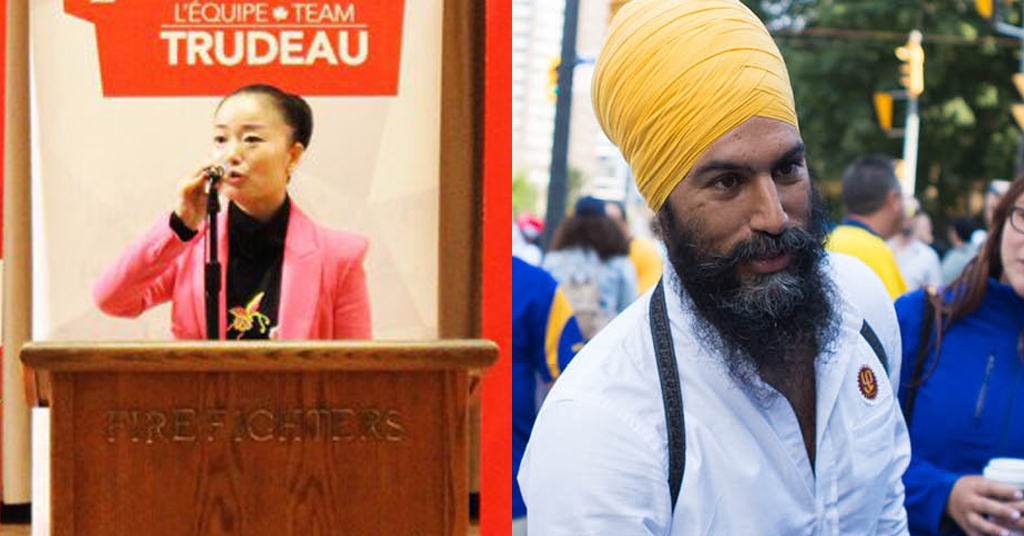 Editor’s Note: Following publication of this story, Karen Wang resigned as the Liberal candidate for Burnaby South. This story has been updated.

Justin Trudeau’s Liberals are facing calls to “denounce” and “dump” their candidate in the high-profile by-election set for Burnaby South.

On Tuesday, StarMetro Vancouver reported Liberal candidate Karen Wang published a message on the Chinese-language social media platform WeChat asking the local Chinese-Canadian community to unite behind her and vote against NDP leader Jagmeet Singh because he is “of Indian descent.”

Translated from Chinese, part of Wang’s post read: “If we can increase the voting rate, as the only Chinese candidate in this riding, if I can garner 16,000 votes I will easily win the byelection, control the election race and make history! My opponent in this byelection is the NDP candidate Singh of Indian descent!”

In a statement, Wang claimed “the intent was to stress the importance of people of all different backgrounds getting involved in this important byelection,” and said she would remove the message from WeChat.

Judging by reaction on social media, that explanation might not be sufficient as voices across the political spectrum called on Prime Minister Trudeau to set an example and “denounce” Wang’s campaign tactics exploiting race:

I’m disappointed to see Karen Wang, a candidate in Burnaby South, exploit the issue of race to dismiss Jagmeet Singh by casting him as the “other.” This is dishonourable and should stop. She needs to run on her accomplishments and platform. Full stop. https://t.co/YkYmp3v1A2

Trudeau needs to condemn the comments made by his candidate in the Burnaby South by-election.

His candidate made a blatant & distasteful pitch to voters based on her racial background & against Jagmeet Singh, based on his. Show some leadership Justin. https://t.co/a01aEj6GMA

This is the kind of crap I expect from Cons. It’s unacceptable from any candidate, but especially a @liberal_party one. @JustinTrudeau, are you okay with this? https://t.co/3cGbYN5xD6

I was not okay when this kind of commentary emerged in the #Okanagan, and I am not okay to hear it in #Burnaby-South. I hope that all elected officials will denounce these comments: https://t.co/MVq7JTkPXJ #cdnpoli

This is disappointing and wrong. Liberal candidate Karen Wang is attempting to divide people on racial lines. As his candidate, the PM needs to denounce this strategy. Leaders bring people of all backgrounds together — something Singh is recognized for. https://t.co/jdQfKy7b1W

The Liberal candidate in Burnaby is telling people to vote along racial lines.
This kind of politicking has no place in Canada and needs to be called out. https://t.co/SOYNnYBVYg

Meanwhile, others voices called for the Liberals to immediately “dump” Wang as a candidate – notably including one of Trudeau’s former economic advisors:

Suggesting that your race is superior to your opponent’s race should disqualify you from running for Parliament. Will the #LPC get rid of their race-baiting candidate in #BurnabySouth? #cdnpoli #ndp

Pure, unadulterated racism from Liberal Party candidate @karenxbwang in the Burnaby South byelection. This has no place in Canadian politics. If Karen Wang does not voluntarily withdraw her candidacy, the Liberals should remove her. #cdnpoli https://t.co/4T5CMA1IYy pic.twitter.com/4aOqxR1RB4

She needs to be fired as the candidate immediately. Anything short of that, deliberately or not, will send the message it is OK to use Singh’s race against him at the local level.

One reason why taking action against these kinds of campaign tactics is important is that it can serve to embolden right-wing parties that routinely use xenophobia to appeal to stir up their supporters.

People’s Party leader Maxime Bernier has already moved to exploit the controversy, issuing a series of tweets Wednesday morning railing against “multiculturalism” and pointing to the incident as evidence of Trudeau’s hypocrisy.

Vote for your race.

Vote for your religion.

VOTE FOR YOUR TRIBE!

-A message from the Liberal Party of Canadahttps://t.co/SoCcjKXcbz

For the Liberals — and the Conservatives— voters are simply a collection of ethnic and religious tribes, and special interests groups, that they pander to in order to get their support.

The LibCon faction that does the most pandering wins.

In a statement, Wang apologized for making comments about Signh’s “cultural background,” adding her “choice of words wasn’t well considered and didn’t reflect my intent.”

Wang said she has “deep respect for (Singh) as the leader of his party and for his public service – and I would never want to diminish that in any way.”

In a separate statement, the Liberal Party of Canada said Wang’s comments are “not aligned” with the party’s values.