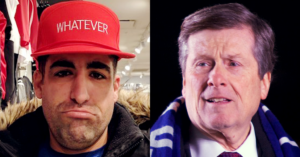 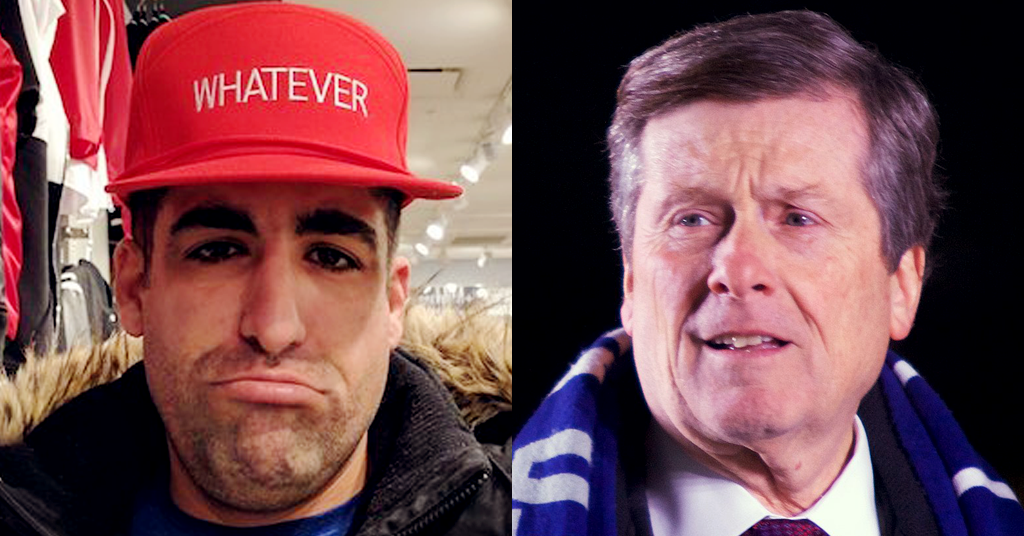 Toronto Mayor John Tory’s election campaign is standing behind its top strategist, despite his history pushing anti-immigrant and alt-right views.

Mayor Tory himself actually condemned Kouvalis last year for the “unacceptable” tone of that campaign. Kouvalis was chief strategist of Tory’s 2014 run for mayor.

At the time, Tory said Kouvalis’ rhetoric “divides people” and “causes people to be anxious about one another” – except that didn’t stop Tory from welcoming his “friend” Kouvalis back to his campaign again this year.

On Tuesday, Tory’s mayoral campaign co-chair Vincent Gasparro vouched for the character of the top strategist, suggesting characterizations of Kouvalis as a liar and a racist are “not representative of who he is.”

I am a Liberal & worked in Paul Martin’s PMO. I’ve gotten to know @NickKouvalis over the last while & can say the things you are saying about him are not representative of who he is.

Tory’s campaign co-chair was responding to a tweet a day earlier from pollster and former CBC At Issue panelist Bruce Anderson.

Anderson tweeted that it was “disappointing” to see the Mayor of Toronto re-hire Kouvalis, considering “lying and racially charged tensions” are already “weakening democracies” around the world.

… with the state the world is in, hyper-partisanship, lying & racially charged tensions weakening democracies everywhere you turn, its disappointing the Mayor of Toronto couldn’t campaign without Kouvalis.

Kouvalis replied, suggesting that “the left” is trying to “assassinate” him and insisted  “those who know me, know the real deal.”

Shame on you, the left, for what you are trying to do. You all know the truth, but you’re playing your game. Shane on you!

Thanks @joe_cressy for the support. How do you treat everyone who’s been helpful? @PaulaFletcher36??? Hey Paula… Will you let them assinate me? Huh?

Yet that’s at odds with Kouvalis’ well-documented history scapegoating immigrants and refugees as a wedge issue for political gain.

During a 2017 podcast hosted by Liberal strategist David Herle, Kouvalis bragged that using “newcomers to Canada” as a scapegoat for economic anxieties was part of his strategy for “going after” older conservative voters:

“The people that we were going after were the people who are really fed up with how unfair the system has become for those that have worked hard and not taken from the system and have come into retirement now and ​they want to get what they thought they were paying into and they’re not getting what they thought they were paying into and newcomers to Canada are getting everything. That’s who we were going after and there are a lot of those people in the Conservative Party.”

Blaming immigrants for the economic anxieties created by right-wing policies in the first place is a pattern illustrated clearly during one of the Leitch campaign’s  numerous self-inflicted blows.

In January 2017, Kouvalis found himself at the centre of controversy for deliberately spreading false information about immigration, refugee and foreign aid programs.

“This was sent to me today. Discuss,” Kouvalis tweeted, providing a screenshot that stated Canada “hands out billions to other countries while Canadians stand in line at food banks.”

After it was discovered that his claims were actually plagiarized from an American hoax chain letter, Kouvalis said he deliberately lied “to make the left go nuts” and claimed he wanted to see who would get mad so he could remove their names from his e-mail database.

Aside from making an explicitly anti-immigrant theme the centrepiece of Leitch’s campaign, Kouvalis also generated controversy using coded language associated with the alt-right.

Kouvalis repeatedly tweeted about “open borders” and a “globalist agenda” promoted by the media and “elites,” dog whistle language clearly echoing the alt-right.

2/3rds of Canadians want what Kellie is talking about. You’ve weakened a nation today. Live with your treason. Cuck. Serious.

This is disappointing but not at all surprising. The elites will stop at nothing to keep their open border & globalist agenda rolling! https://t.co/s6JbKOCDRd

The staff wrote it! Media continue to accuse Kellie of that. Why? Because their snotty & upset their open border Ideology is under attack https://t.co/y9Po1p666x

65% of Canadians agree- its media’s job to report. Do you believe that we should integrate immigrants who believe that women are property? https://t.co/htgKD5lLAJ

“Would you shut up already with the racist and xenophobic fear mongering!”, said no one with a brain in their head… https://t.co/7ZWW32KrgS

Despite the Tory campaign’s attempts to argue Kouvalis’ own words and actions are not a reflection of who he is, the top Tory strategist seems to be making things as hard for his enablers as possible.

Tuesday night, the Tory strategist announced that he is considering settling old scores by writing a tell-all book.

“Perhaps I will write some ‘colour’ about the journalists along the way,” Kouvalis tweeted ominously.

At what point does a campaign require a crisis-communications strategy for dealing with its own strategist’s communications? pic.twitter.com/sKSlUMZ35k