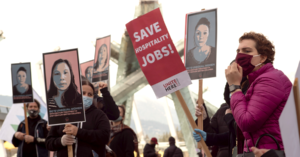 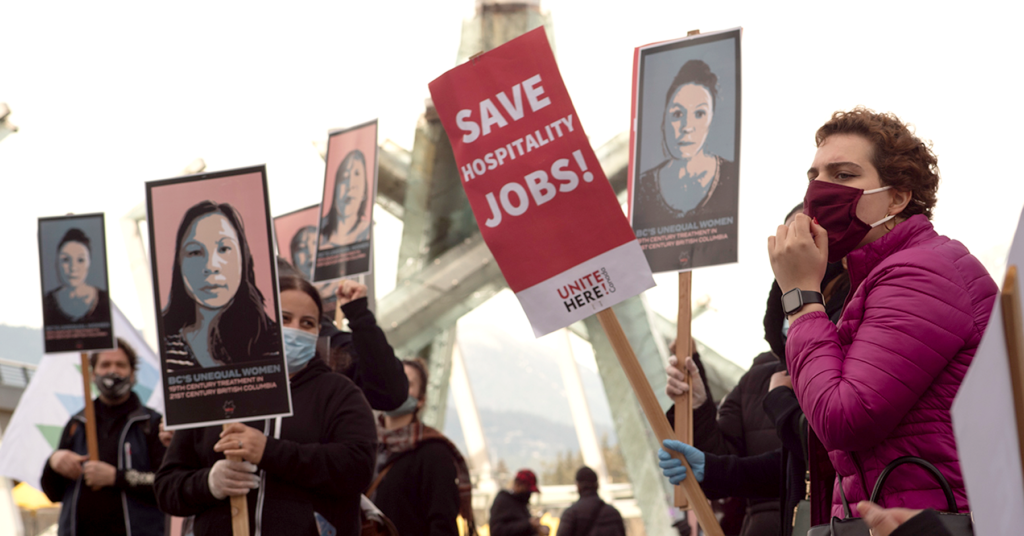 Hotel Workers Are Fighting For Their Right to Be Recalled to Work After The Pandemic Ends. They Could Lose Their Jobs For Good.

Without right to recall legislation, BC hospitality workers could lose good jobs with higher wages, better benefits and seniority

Thousands of hospitality workers across British Columbia are currently on strike or under threat of lockout in response to strained negotiations with employers who refuse to bring their employees back when business returns.

At the centre of the labour dispute is the ‘right to recall’, which guarantees employees who have been laid off the ability to return to their jobs should work become available again within a certain time frame.

However, layoffs triggered by the pandemic have outlived many recall clauses, leading hotels like the Pacific Gateway and the Hilton Metrotown to terminate staff. Workers and their unions want recall rights extended to reflect the unprecedented circumstances that the workers are facing.

Michelle Travis of Unite Here Local 40, which represents hotel, motel and liquor store workers across the province, said the local’s members only want their jobs back.

“Folks want to go back to these jobs. Even if they take something in the interim, the vast majority want to return, and they want to know they can go back when it’s time,” Travis told PressProgress.

Many workers are long-term employees who have been working at these establishments for years, or in some cases decades. Over time, they have gained seniority, earned higher wages and secured vacation time and benefits that are rare in the hospitality industry.

After working as a front desk clerk at the Pacific Gateway Hotel for 20 years, Dulce Pereyras-Verma was laid off at the beginning of the pandemic. When the hotel became a quarantine site, she was able to return to her job while her coworkers received emails from the hotel telling them their jobs had been terminated. 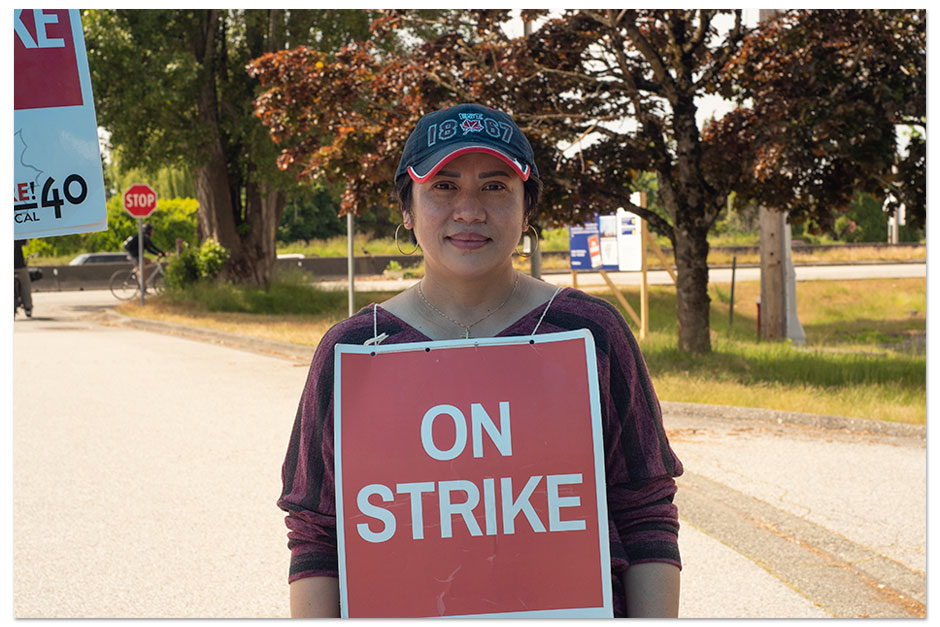 “I said to my coworkers, in my Christian conscience, I can’t just sit there comfortably, continue to work and earn, when the majority of my coworkers whom I’ve worked with for so long will be out here and, you know, in this predicament that they’re gonna lose their jobs and worry about how they’re going to go on with their day to day living.”

Pereyras-Verma has now been on strike in solidarity with her laid off coworkers for five weeks. The Pacific Gateway’s workforce is majority women of colour, and the terminations have hit departments that are female dominated, like housekeeping, particularly hard.

“It just hurts. (The owners) keep calling us family, ‘you’re the PGH family.’ But then if we truly are valued, how hard is it to just say, ‘okay, you know what, here, we’ll extend your recall rights, it doesn’t cost us a penny,’” asked Pereyras-Verma.

Unite Here sees the refusal to bring back workers as a scare tactic to pressure workers to accept a steep reduction in wages and benefits — if they don’t accept, they could be replaced by a new, lower paid workforce.

Representing the employers in negotiations is Hospitality Industrial Relations, a bargaining agent and labour consultancy firm. Though Unite Here Local 40 has negotiated with HIR for years, Travis said negotiations during the pandemic have been especially tense.

“As we’ve pushed for higher standards, they’ve gotten more aggressive,” Travis said. “And now that we’re in the middle of a pandemic, they see an opportunity to really kind of roll back economic gains made by workers over the years.”

The City of Burnaby and the BC Federation of Labour have come out in support of the striking workers, pledging to pull their business from the hotels and encouraging other organizations to boycott.

Laird Cronk, President of the BC Federation of Labour, notes that earlier on in the pandemic, the hospitality industry lobbied the provincial government to extend severance clauses in order to avoid paying out huge severance packages, arguing the clauses didn’t take the pandemic into account.

“But when it comes to the workers’ rights, duly and fairly negotiated, they seem all too happy to allow those rights to extinguish, and not recognize that COVID was never intended when those rights were put in place,” Cronk told PressProgress. 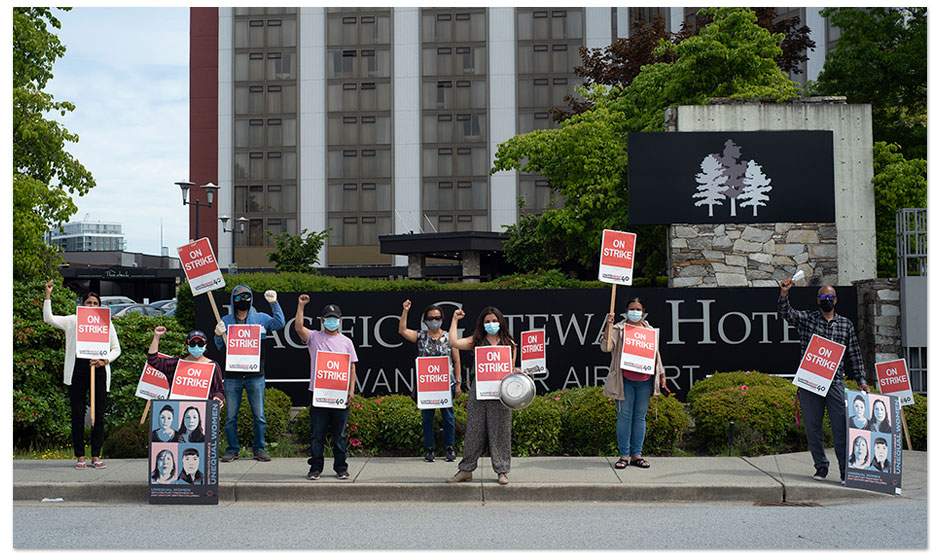 The situation for hospitality and tourism workers isn’t quite as bleak on the other side of the border.

A number of cities and states across the US have proposed or passed right to recall legislation, ensuring workers have the right to return to their jobs as they become available.

In California, a right to recall bill was passed in April requiring employers who operate hotels, airport services and event centres to offer positions to employees who were laid off due to the pandemic. Workers then have five days to accept or decline the offer.

Steve Smith, director of communications for the California Federation of Labour, is cautiously optimistic that the right to recall bill will help workers recover after a difficult year.

“As we’re starting to recover and slowly inch toward some semblance of normalcy, folks are starting to go back to work, and this policy ensures that those folks who lost their job through no fault of their own are able to come back to work and be paid the same wage and and provide for their families again,” Smith told PressProgress.

According to Smith, fears that long-serving workers would be replaced by a lower-paid workforce prompted the fight for the right to recall.

“So we were really concerned that as we opened back up we would be seeing companies hiring younger workers at lower wages to replace those with seniority, and that was really a driving force behind the effort to get the right to recall legislation here in California,” Smith said. 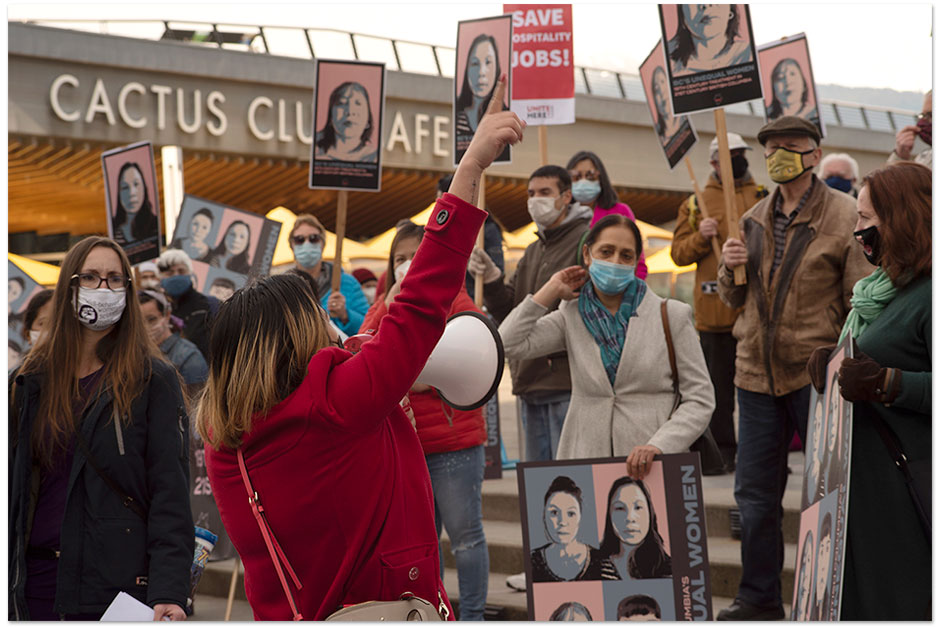 Cronk said this is exactly the kind of legislation that worker advocates would like to see passed in BC.

“A successful recovery for British Columbia includes businesses surviving, and the workers who worked in those businesses having the right to go back to the jobs once those jobs are available again.”

In a statement to PressProgress, BC Labour Minister Harry Bains said he’s sympathetic to the impact that the pandemic has had on hotel workers’ job security, noting “it’s difficult to live with this kind of uncertainty in your job when you have a family to support and bills to pay.”

But when asked about implementing similar legislation, Bains said the province conducted a review in 2020 and concluded it was better to leave it to employers and workers to come to a “voluntary” solution.

“Our government investigated how the pandemic was affecting layoff and recall rights in the unionized hotel sector in BC with a review done by Sandra Banister in August 2020. Based on the findings in Ms. Banister’s report, we determined that the best course of action is for employers and unions to work out a voluntary resolution to these challenges, as I also believe government should refrain from interfering in the collective bargaining process.”

In a statement after the release of Banister’s report, Bains committed to asking his colleague ministers to tie financial supports for the hotel and tourism sectors to “right of first refusal for existing employees when work resumes.”

Travis said Unite Here has heard these kinds of statements before.

“They’ve demonstrated no interest in making sure that workers have a right to return to their jobs after the COVID crisis passes,” Travis said. “And this was never just about unionized workers. We’ve always talked about workers in the sector broadly. Non-union workers started losing their jobs early on, they didn’t act. Unionized workers had a little more protection but now we see that they’re being fired. The province looked the other way.”

After seeing so many of her coworkers laid off while the Pacific Gateway operates as a quarantine facility funded by the federal government, Dulce Pereyras-Verma thinks it’s hypocritical of the provincial government to tell workers the government can’t get involved.

“Well, how would you say the government should not get involved with the labor disputes when they’re using taxpayers’ money to fund this hotel here to function as a quarantine site?” she asked.