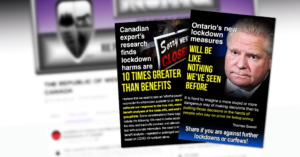 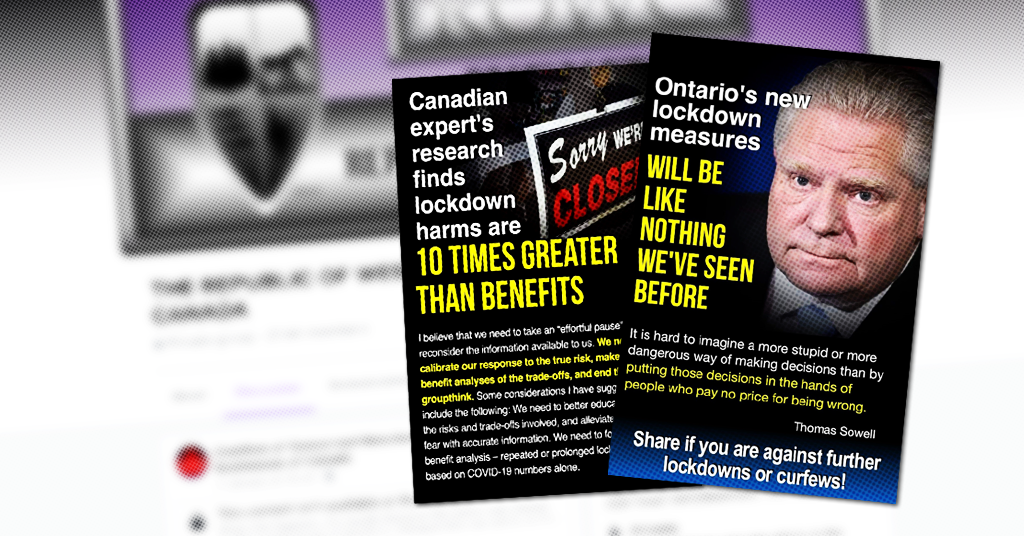 The group, which has links to the Manning Centre, repeatedly posted anti-lockdown memes in a private group for Alberta separatists

An Ontario-based “small business” group backed by big players in the oil industry insists it had “no idea” their official Facebook account was repeatedly criticizing public health orders on a daily basis in a group for Alberta separatists.

The Coalition of Concerned Manufacturers and Businesses of Canada describes itself as a group representing “small to medium businesses” in “every sector.”

Corporate records show the CCMBC is based in Scarborough and lists its registered address at the same location as the head office of a pipeline coating company called Automated Coating Limited.

The CCMBC says it has received funding from high profile corporate sponsors, including the Canadian Association of Petroleum Producers, the Modern Miracle Network and Enbridge. Its gala has featured keynote speakers like Rex Murphy and the Toronto Sun’s Anthony Furey.

But on Facebook, the CCMBC has been prolific in posting anti-lockdown memes in a far-right Alberta separatist page.

On a regular basis in recent months, the CCMBC has posted in “The Republic of Western Canada,” a private Facebook group devoted to Alberta separatism. 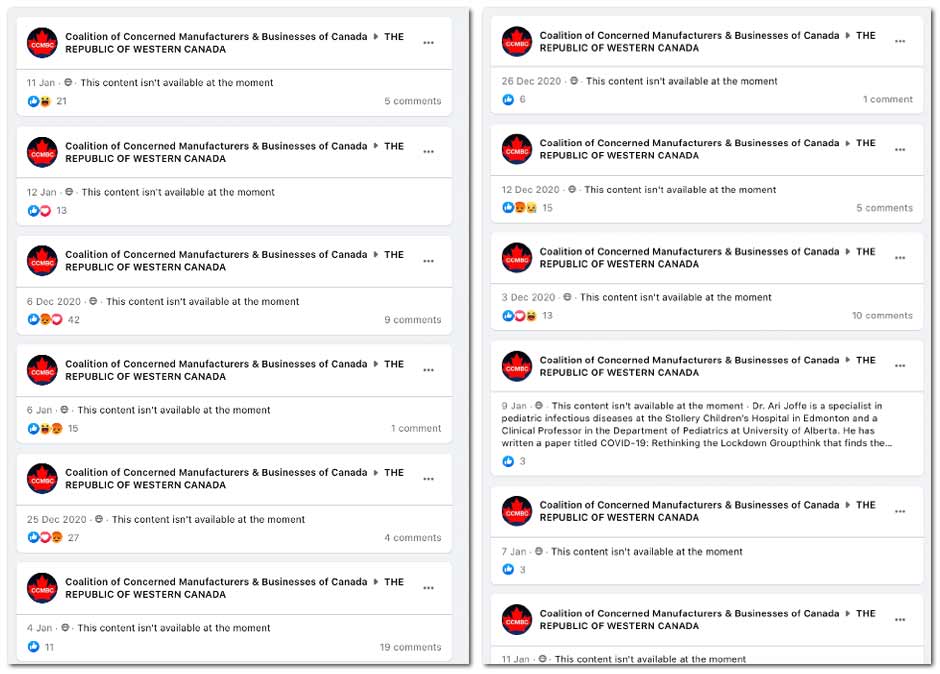 The group has also repeatedly shared anti-lockdown memes, claiming research has found “the harms of lockdowns are 10 times greater than their benefits.” 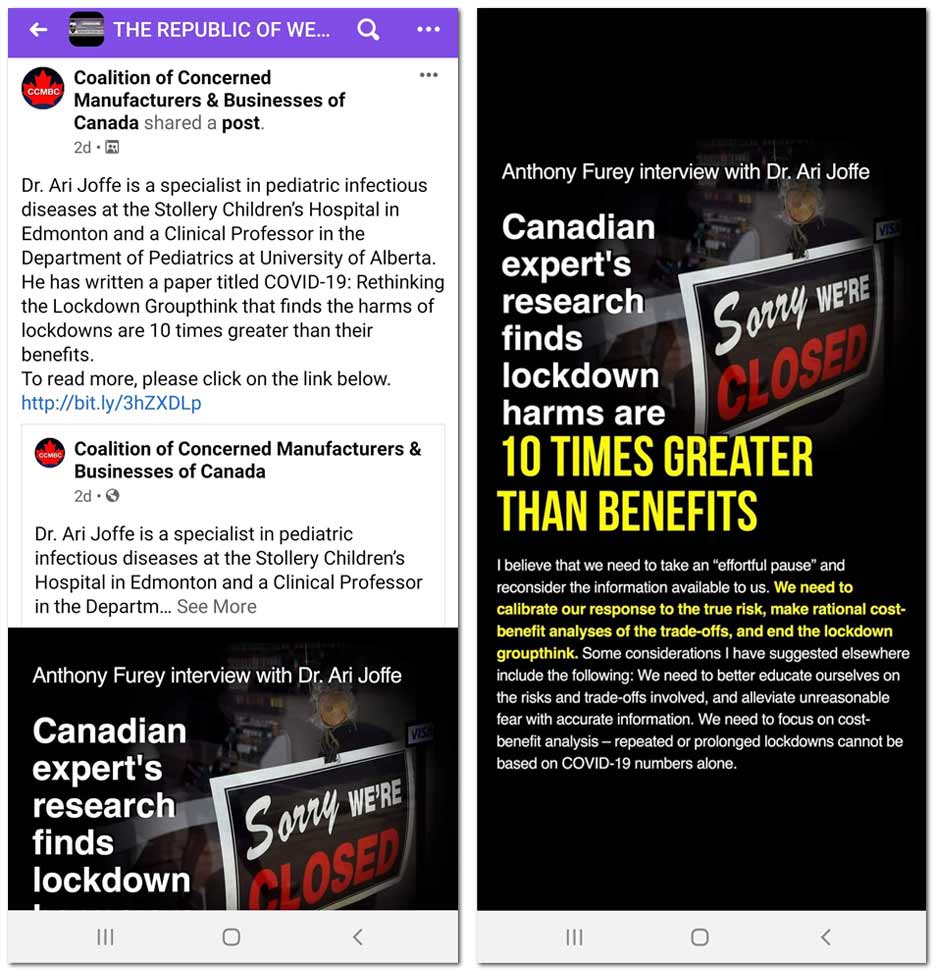 Other memes posted in the Alberta separatist group raise concerns about “the impact of new COVID-19 restrictions” on jobs and businesses.

Another meme posted by CCMBC attacks Doug Ford’s “lockdown measures” in Ontario, describing them as “stupid” and “dangerous.” The group suggested Ford would “pay no price for being wrong.” 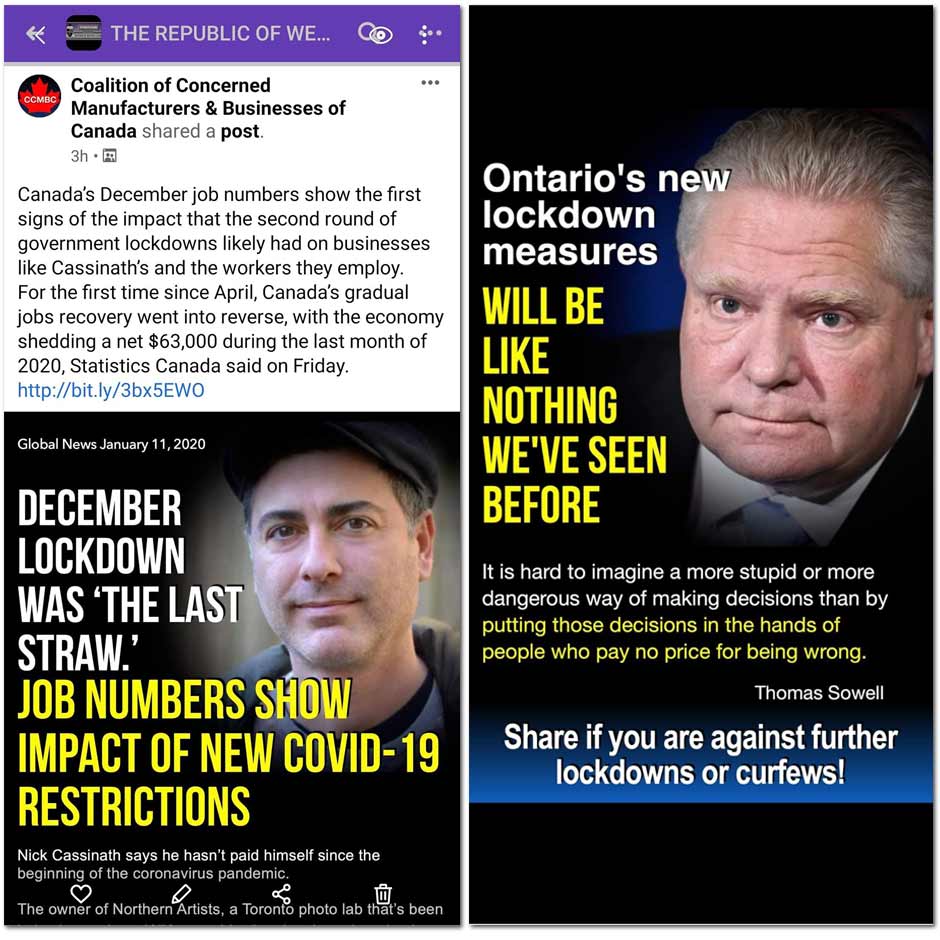 In response to questions from PressProgress, the CCMBC claimed it was unaware that its page was posting anti-lockdown memes in separatist groups.

“I had no idea that our content was being shared to a Wexit page,” a spokesperson who refused to identify themselves told PressProgress.

“We have asked the contractor to remove this post immediately,” CCMBC said, explaining “CCMBC contracts its social media to a third party contractor who is responsible for posting content to CCMBC social media page only.”

The CCMBC later posted a statement on its Facebook page announcing that it has “implemented a policy to post only to our social media page.” They added that “any sharing of our content with other pages does not constitute an endorsement of those pages or their content.” 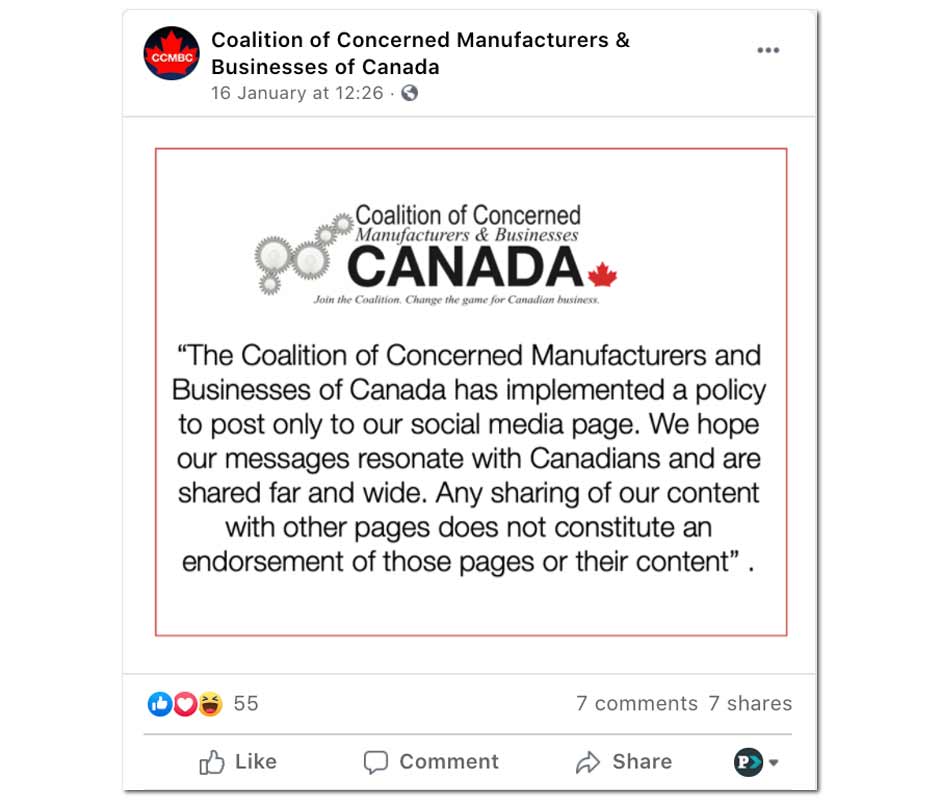 The CCMBC’s founder and board chair is Jocelyn Williams Bamford, who is also the Vice President of Automatic Coating Limited. Bamford is a director of the Canada Strong and Free Network, the right-wing organization that was formerly known as the Manning Centre.

On social media, Bamford has criticized media coverage of the recent insurrectionist attack on the US Capitol and pushed unfounded claims of “voter fraud” following the 2020 US presidential election.

The group reiterated to PressProgress that its memes do not seek to advance any political agenda.

“Our focus is on government policy that effect SME businesses in Canada regardless on political stripe,” the anonymous spokesperson said.

The Canadian Association of Petroleum Producers, which the group has publicly thanked for its “generous donations,” did not respond to a request for comment from PressProgress.