Foodora is Pushing Anti-Union Propaganda to Gig Economy Workers Through Its Mobile App, Labour Board Told

Ontario food couriers working for Foodora will vote this week on unionizing with the Canadian Union of Postal Workers — but the union complains that the company is using 21st century union-busting tactics to disrupt the certification vote.

In a statement this week, CUPW said it filed a formal “unfair labour practice” complaint against Foodora with the Ontario Labour Relations Board, alleging the online food delivery company is “spreading lies and misinformation” through direct push notifications sent to their workers’ mobile phones.

“Foodora has attacked the union drive by threatening the income of its couriers through emails and directly messaging them on the app that they use for work,” the union alleges, accusing management of trying to “scare couriers into voting ‘no’.”

Emilie Tobin, a spokesperson for CUPW, told PressProgress that since organizers filed for union certification with the Ontario Labour Relations Board, they’ve seen the employer use a number of “anti-union tactics.”

“They have created materials spreading misinformation about the union and are disseminating them via e-mail and a website they’ve created.” Tobin said. “They are sending push notifications via the app all couriers have on their phones.”

Foodora courier Ivan Ostos told PressProgress the company’s e-mails to workers tell them “union support comes at great cost to your wallet and your flexibility” and directs them to an anti-union website that warns them against unionizing.

In one push notification Ostos supplied to PressProgress, workers were misleadingly told a ‘yes’ vote “could cost you up to $1,100 in union fees” — though Foodora’s own website quietly admits dues for an “average” courier would be less than one-third that amount. 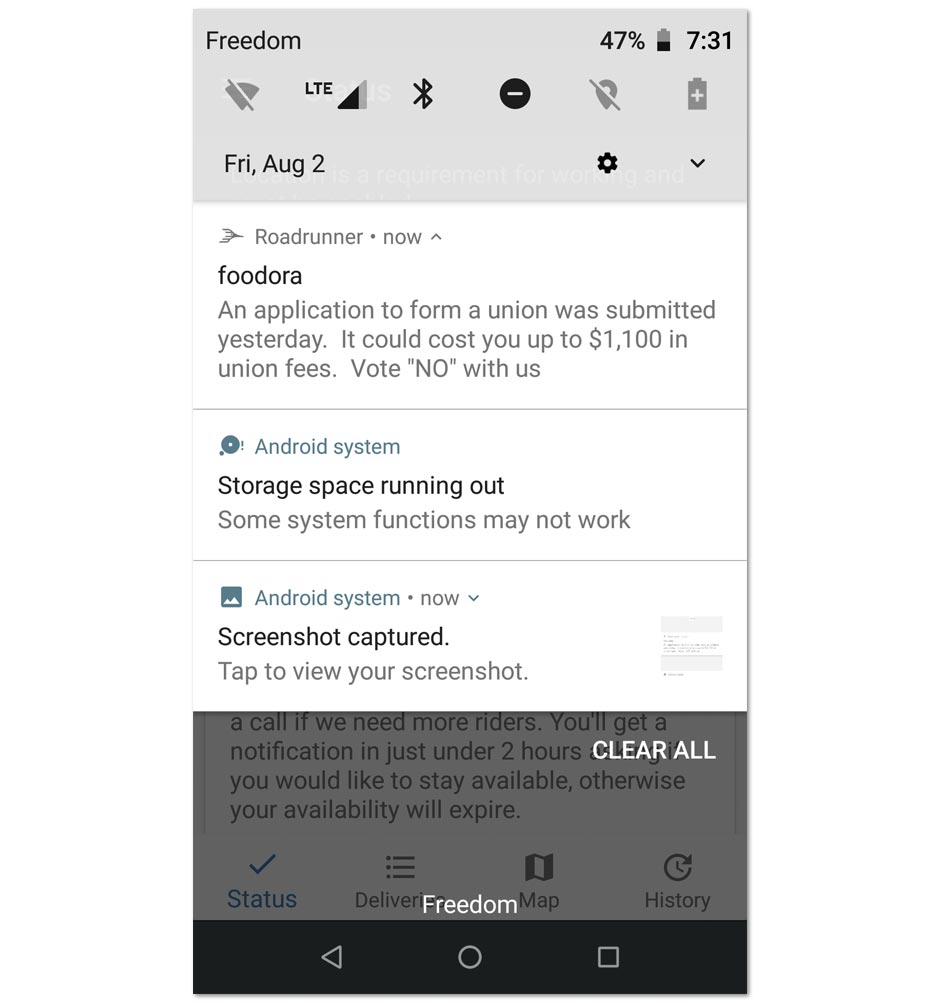 In a statement to PressProgress, a Foodora spokesperson did not directly address its use of push notifications, but confirmed the company is sending anti-union messages to the company’s food couriers.

“We have used multiple channels and touch points to provide Foodora couriers with clear and factual information to help them make an informed decision regarding union representation,” the spokesperson said.

“We’ll continue to exercise our right to free speech to ensure that our couriers can make a fully informed choice.”

Those workers, however, suggest Foodora is “trying to scare us.”

“Every time we sign in to work, we get these notifications sending us to that site and telling us to vote no,” Ostos said. “They’ve sent emails warning that unionizing will cost us over a thousand dollars every year” and impact “flexibility in scheduling.”

Despite the company’s warnings about fees, the union counters that “improvements in pay, benefits and fair treatment you gain from a union are far greater than the cost in dues,” pointing out the company has not raised pay in the last three years.

The union also pours cold water on the company’s suggestion that unionizing will impact “flexibility,” telling workers a first contract builds on the pay and rights they currently have and that it would be “illegal for Foodora to change your present wages and working conditions.”

Foodora, meanwhile, says it rejects CUPW’s complaint about its use of anti-union push notifications through the company’s mobile app.

“Foodora has and will continue to act in good faith and in accordance with Ontario’s labour laws,” Foodora’s spokesperson told PressProgress.