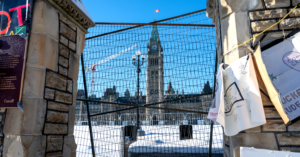 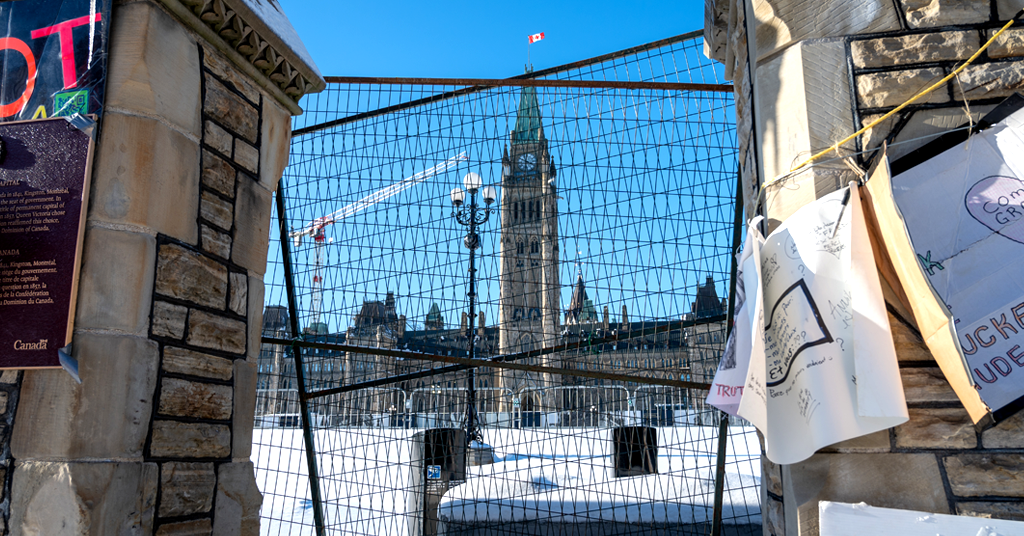 A newly released internal counterterrorism report reveals that at least four federal cabinet ministers were subjects of specific “violent extremist threats” in the lead-up to the Ottawa convoy occupation in January.

The report outlines concerns about groups angered by COVID-19 pandemic restrictions and “gender-based” grievances, warning some cabinet ministers faced an “elevated threat” due to their “demographic profile.”

The report was prepared by the Integrated Terrorism Assessment Centre (ITAC) and was obtained by PressProgress through Access-to-Information.

ITAC operates under the umbrella of the Canadian Security Intelligence Service and is tasked with analyzing potential terrorist threats in Canada.

David Vigneault, the director of CSIS, previously testified to parliament that the agency had concerns that “violent extremists” might engage in in “acts of violence” during the convoy, but provided no specific examples, citing classified intelligence.

The heavily redacted ITAC report, which is titled “Violent extremist threats to four specific ministers,” is marked “secret” and was prepared in response to a request for information from an unknown recipient. It is dated January 31 – the Monday after the convoy’s first weekend in Ottawa.

Details about the specific threats are redacted from the report. The Privy Council Office did not respond to questions from PressProgress about the nature of the threats targeting the four cabinet ministers.

Stephanie Carvin, a Carleton University international affairs professor and a former CSIS intelligence analyst, says the report’s preamble makes clear that the threats were concerning enough to meet the threshold of what might be considered terrorism.

“It would have to meet 2(c) of the CSIS Act,” Carvin told PressProgress. “It’s basically an act of violence to further a political, religious or ideological cause – and it has to be serious violence.”

“What they’re talking about is violence that would be serious enough to be considered a national security threat which, to me, lends itself to an attack on democratic institutions, including politicians.”

Concerning the “ongoing protests in Ottawa,” the report notes “open-source reporting indicates that grievances and conspiracy theories related to the COVID-19 pandemic” are providing some extremists with “justifications for political violence,” particularly among “anti-government and anti-authority extremists opposed to lockdowns, vaccines and other COVID-19 measures.”

“Threats tend to target Prime Minister Trudeau as well as other federal ministers, politicians and public officials perceived to be responsible for the implementation of public health measures.”

The report also references a previous ITAC threat assessment relating to “the doxing of, and threats against, the Premier of Québec” earlier that month.

The report stresses that “ITAC assesses that restrictions and public health measures related to the COVID-19 pandemic and vaccines continue to be the most significant drivers of IMVE (Ideologically Motivated Violent Extremism) threats.”

“Elected officials perceived to be responsible for, or complicit, in Canada’s pandemic response likely face an elevated threat.”

Echoing a number of recent high-profile incidents targeting elected officials, public health officials and journalists who are women, the report also underlines an elevated threat based on gender and sexuality.

“Gender-based IMVE” refers to a specific category of violent extremism and terrorism that is defined by CSIS as violence rooted in “hatred of those of a different gender and or sexual orientation,” including “violent misogny,” “anti-LGBTQ violence” and “Incel” violence. 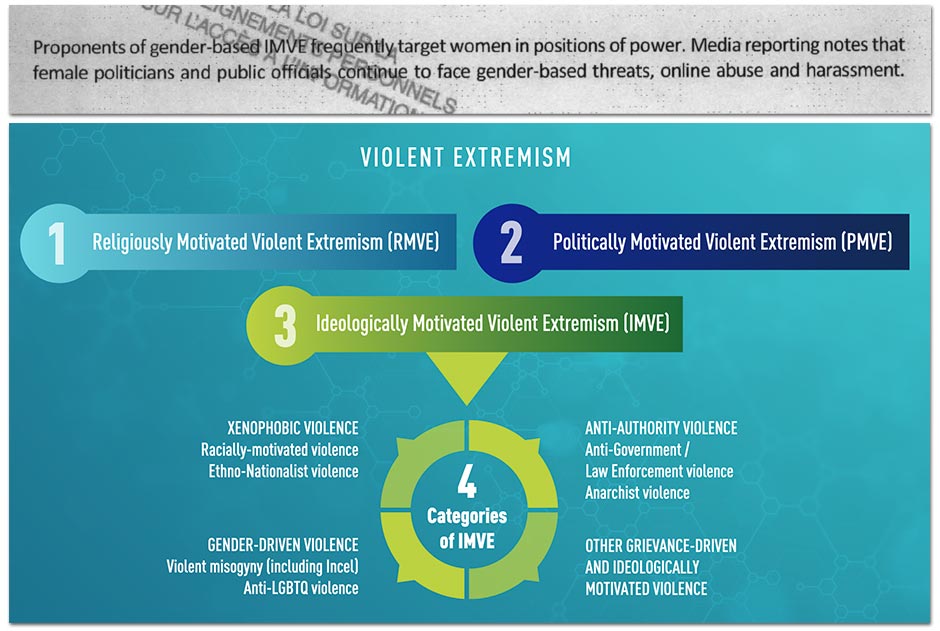 Carvin said it is unclear if the report’s reference to “gender-based” violent extremism means the threats targeted cabinet minister’s based on their gender or sexuality, but noted “they’re referring to a specific category here of IMVE actors.”

“There’s a real link between the far-right and gender-based violent extremists because they share very similar worldviews when it comes to the role of women,” Carvin said. “There’s a clear overlap with people who are incels or anti-LGBTQ and groups that take traditionalist masculinity as a core part of their philosophy.”

“Gendered IMVE can look like many different things, and we are not surprised that it has shown up with respect to the COVID conspiracy movement, as every far-right movement involves misogyny,” Simons told PressProgress.

“It can present as threats against specific women or 2SLGBTQ+ persons – public facing or not – based on their gender or sexuality.” Simons said that includes “threats against people who the perpetrator perceives to be part of the 2SLGBTQ+ community” while “threats against Trudeau based on his sexuality or gender” could also be characterized as “gendered IMVE.”

The counterterrorism organization later references the 2021 assassination of a British Conservative MP by an ISIS sympathizer, stressing it is most concerned about possible attacks in locations with “minimal security” based simply on “opportunity.”

“Despite the elevated threat to some specific ministers and opposition leaders based on their demographic profile or ministerial portfolio, ITAC judges that opportunity is likely the primary factor for an IMVE adherent in determining an attack target,” the report states.

“Ministers and opposition leaders who are local, identifiable, and in a known location with minimal security in place could be specifically targeted simply due to ease of access.” 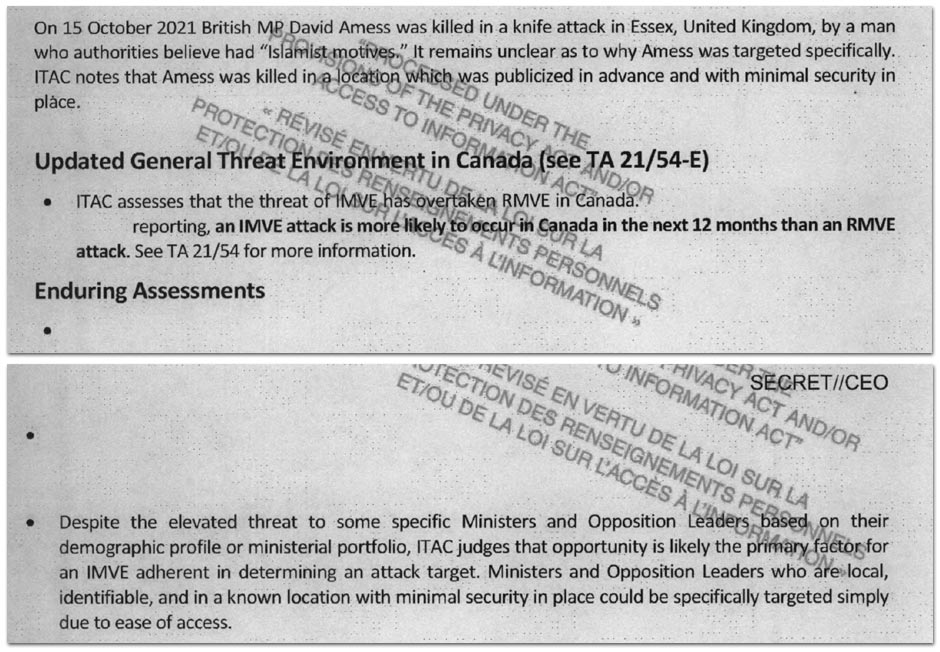 The counterterrorism report concludes that while violent religious extremist groups like “Al-Qaida” continue to pose a threat to Canada, it is now keeping a closer eye on threats from far-right extremists and anti-vaccine or anti-lockdown extremists.

“An IMVE attack is more likely to occur in Canada in the next 12 months than an RMVE attack.”