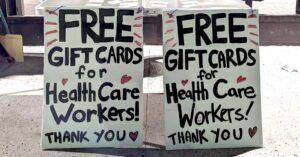 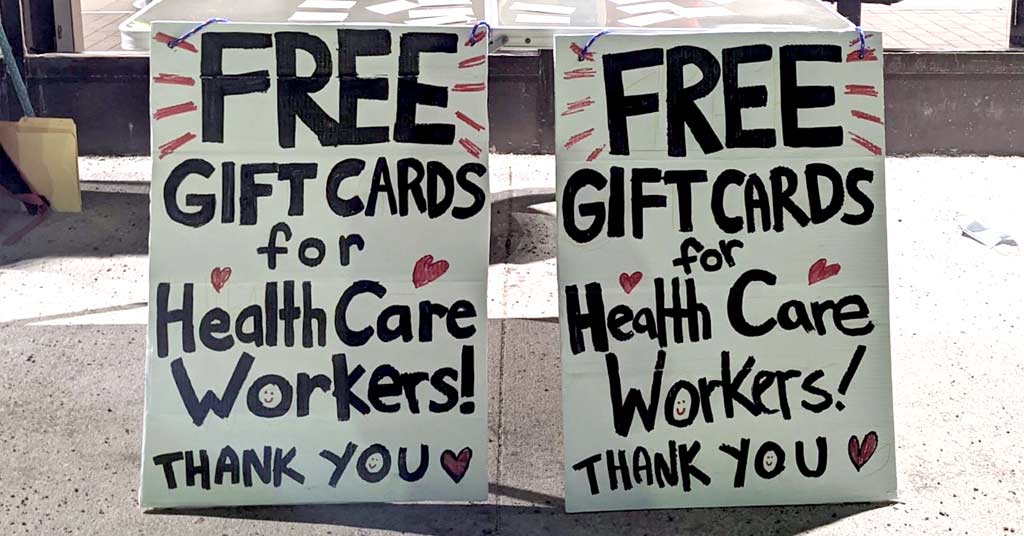 The RCMP were called on a community group handing out gift cards to health workers following an email from a Manitoba government official who used to work as a top adviser to former Premier Brian Pallister, internal records show.

The community group shut down its January 2021 event in support of Manitoba health workers shortly after learning the RCMP was monitoring them.

Internal emails newly obtained by PressProgress show the decision to call police was sparked by an email from Shared Health executive Olivia Baldwin. 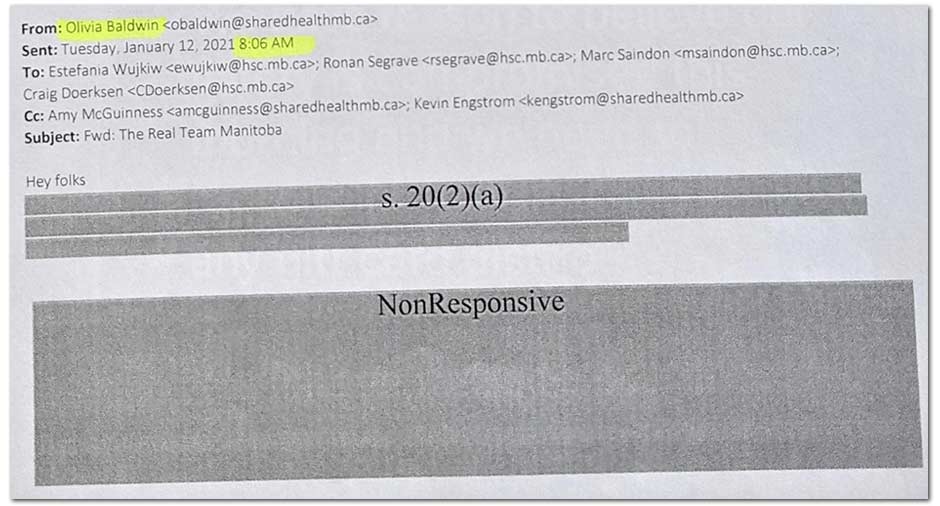 Email from Olivia Baldwin obtained via Freedom of Information

The content of Baldwin’s email is redacted, though the subject line of the email explicitly states: “Fwd: The Real Team Manitoba.”

Administrators later relied on information from Baldwin’s email thread to falsely characterize the pro-health care group as “anti-mask” to the RCMP. 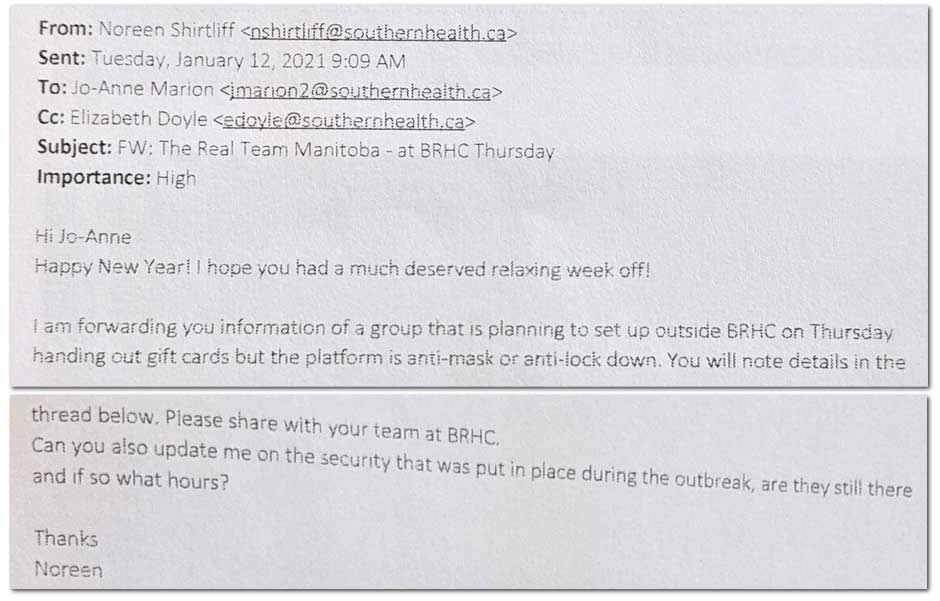 Email from administrators obtained via Freedom of Information

However, the community group, called the “Real Team Manitoba,” was not anti-mask and received significant media attention criticizing the Pallister government’s inadequate response to the COVID-19 pandemic.

St. Boniface Hospital! Our hearts are full. Thank you for all you do on the frontlines. It means a lot for us to be able to show how much Manitobans appreciate you all. 🥰✨

Community will continue to care as our provincial politicians refuse to invest in you #ResignBP pic.twitter.com/kXujOMe3VB

“It’s about holding our government to account,” organizer Rebecca Hume told the Free Press. “If a different party were in office right now in Manitoba and they were this bad at containing COVID, we would be just as critical, and just as engaged and still be doing this project.”

The emails between health officials and the RCMP suggest little to no effort was taken to verify who the group was. At no point in the email chain does anyone, including the RCMP, attempt to independently verify the claim that the “Real Team Manitoba” is an “anti-mask” group – even though both organizations monitored the group’s Twitter account.

Olivia Baldwin, Shared Health and the RCMP did not respond to questions from PressProgress about what steps they took to look into the community group.

However, the Real Team Manitoba’s gift card campaign for health care workers was featured in the Winnipeg Free Press and CTV News in November 2020 – over a month prior to Baldwin’s email.

The group made over $12,000 selling satirical signs and stickers that parodied the Manitoba PC government’s own messaging, like “Reopen. Restart. Regret. #ReInfectMB” and Pallister naming the Manitoba PC cabinet “Team Manitoba.” The group was also among the first to call for Pallister to resign, selling “Resign BP” lawn signs and bumper stickers.

“We’re directly going to be using those funds to purchase gift cards from local restaurants and businesses,” Hume told the Free Press. “We’re then going to be donating them to frontline health-care workers at a number of hospitals throughout the city and Bethesda in Steinbach.”

Five hospitals initially agreed to help distribute the cards to workers, but Hume told PressProgress they all later backed out after seeing the group’s political satire online.

The group distributed the gift cards themselves while wearing masks outside a hospital the day before Baldwin’s email went out.

However, the day Baldwin’s email went out, the group was confronted outside another hospital by security and the hospital’s director. The director told the group they were too “political” and told them to leave, Hume said. A health care worker also leaked a manager’s email to the group that day showing they were being falsely characterized as “anti-mask” and a threat to workers.

Hours after this, we were alerted to an internal communication circulated to hospital administrators in the Southern Health Region that The ‘Real’ Team Manitoba was planning to host an anti-lockdown and anti-mask protest at local hospitals. /5 pic.twitter.com/P7La7shBwh

The RCMP agreed to keep patrolling, one email shows, despite seeing the group’s Twitter post calling off the event. 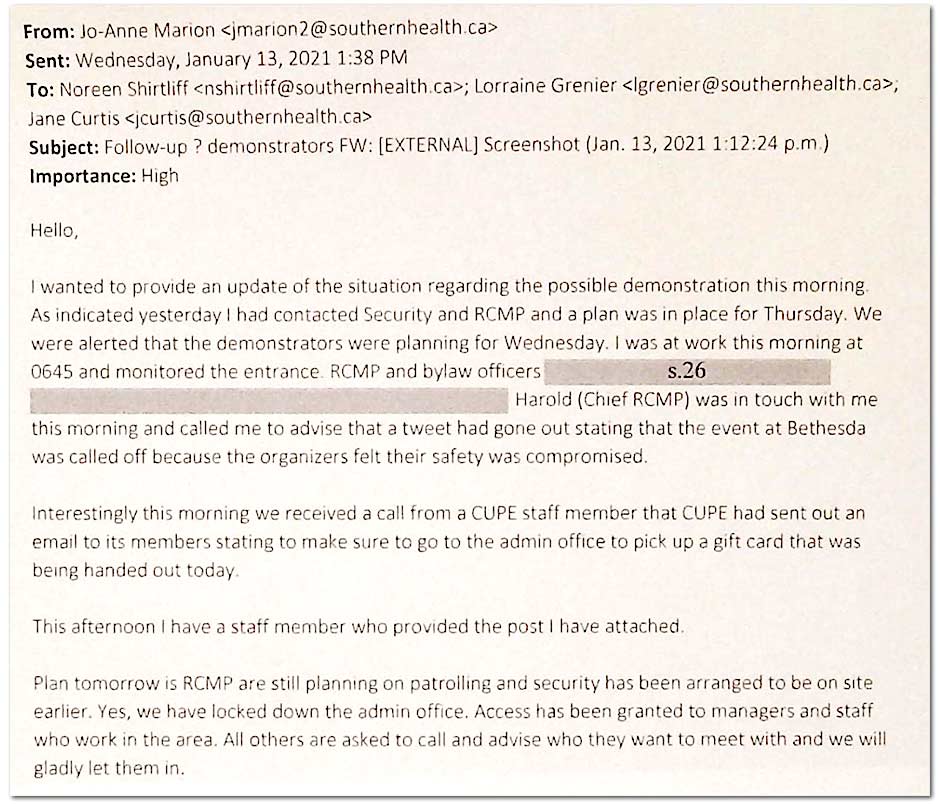 Email from administrators obtained via Freedom of Information

“As the president of front line workers, I thank you for want to spread joy by handing out gift cards to the hard working front line staff,” Boissoneault tweeted.

“Wearing mask and hand sanitizer for people to use,” Boissoneault pointed out. “Random acts of kindness when people can really use some.”

As the president of front line workers, I thank you for want to spread joy by handing out gift cards to the hard working front line staff. I love the grinch sticker where can I get one.

The “Real Team Manitoba” filed Freedom of Information requests to better understand why their event supporting health workers was derailed. When the group finally obtained the emails, they were concerned to see how far up the “anti-mask” messaging started.

“We were shocked and upset,” organizer Daniel Friesen told PressProgress.

“There’s absolutely nothing from our social media that could have given anyone investigating in good faith the impression that we were anti-mask or wanted to enter the hospital in any way.”

“It seemed clear that people with power were trying to create a narrative that we were a bother and therefore ok to be confronted aggressively by hospital security or police,” Friesen added.

Kevin Walby, Director for The Centre for Access to Information and Justice at the University of Winnipeg, says these documents provide a window into what could possibly be an example of political policing.

“Given that this group was also very vocally critical of the government and that they’re met with this response after a set of flippant emails in an email chain starting with someone very close to Pallister, it just all doesn’t add up,” Walby told PressProgress.

“We can’t see exactly what’s in the [Olivia Baldwin] email here, but it really reveals something about the way that governance happens,” Walby said. “Some of the information that we do see is inaccurate and there’s not a lot of checks and balances.”

“It’s just like a flippant email from one person to another and then they can enact this whole security protocol and set up surveillance against citizens. It’s pretty startling.”

Police need to have “reasonable and probable grounds” to justify their actions, Walby adds, so it is concerning the RCMP appeared to act on false information without validating it.

“It reflects this notion that police and security are not supposed to be operating in ways that stray from these legal principles that they’re supposed to follow in Canada, otherwise, it’s political policing.”

“And yet, we see something that could very well resemble the minutia of political policing, how it happens, how a call is made in this email chain.”