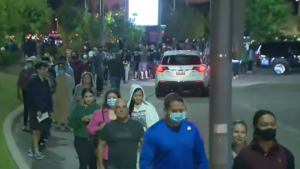 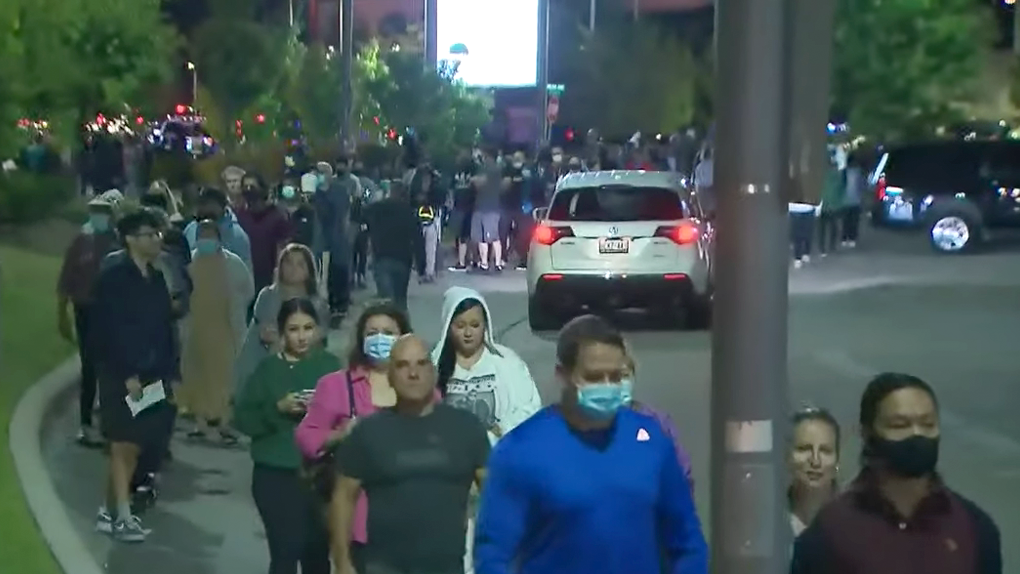 With strict public health rules in force and a significant reduction in staff at voting locations, voters across the country, in some cases, waited for hours Monday night to cast ballots.

In a statement to PressProgress, Elections Canada admitted election day problems obstructed the ability of some voters to cast votes.

“We know we did not meet all voters’ expectations in terms of accessibility to the vote,” an Elections Canada spokesperson said, acknowledging “some voters in urban ridings (were) waiting patiently in line yesterday.”

“Our poll workers did everything they could in challenging circumstances to ensure a safe voting process.”

As polls closed at 9:30 PM, voters at a number of polls in a number of ridings still had to wait in line — in some cases for hours — to cast their ballots.

In the riding of King-Vaughan, just north of Toronto, CTV News captured video of voters facing a long,a snaking line all the way to the edge of a highway as the polls closed at the end of the night.

In Toronto, one downtown polling station at Fort York also stretched for blocks.

Lineup for #voters #Elxn44 #FortYorkSpadina – under #TheBentway – as night falls people are still lining up to vote. Lineup now stretches from Fort York to Bathurst St and up over the Bathurst St bridge pic.twitter.com/abR3fJbZVf

At the University of British Columbia, CBC News reported students were told they would have to remain in line between three to four hours — well into the early morning — just to finally vote.

“In terms of the impact of fewer polling locations on line ups, it is tough to make a generalization as circumstances differ from riding to riding,” an Elections Canada spokesperson told PressProgress.

“Having fewer locations, and potentially longer wait times is something Elections Canada has anticipated and has tried to be transparent about as we planned to deliver an election in the context of the pandemic.”

On its website, Elections Canada noted earlier this summer that the agency “does not set the date or duration of a general election and that “the Canada Elections Act provides for a general election to be held on fixed dates and the election period to be set at a minimum of 36 days and a maximum of 50 days.”

“In a pandemic context, a longer election period would provide advantages.”

In June, Canada’s Chief Electoral Officer Stéphane Perrault told the Procedure and House Affairs Committee that Elections Canada could use more time to prepare for an election in the middle of a pandemic.

“There is merit to a longer writ period in a pandemic, because everything takes more time,” Perrault told MPs, though Prime Minister Justin Trudeau did not take that advice.

“Elections Canada, as an independent agency, is mandated to be ready to conduct a federal election or byelection at any time,” a Liberal government spokesperson told the Hill Times in July. “This includes planning for a potential federal general election during the COVID-19 pandemic, and in the context of a minority government.”

Earlier this month, in the middle of the election, Elections Canada faced intense criticism after cancelling voting on university campuses, claiming the agency did not have enough time to organize voting locations.

All told, Elections Canada operated 14,300 polling locations on election day. That’s down from 15,477 in 2019 — all while capacity limits due to COVID-19 restrictions slowed voting down further.

But that reduction hasn’t been spread equally: Densely populated urban areas with the highest number of renters and often the most inequality, saw some of the sharpest reductions in polling locations.

For example, in the Greater Toronto Area:

A win for democracy?

2021 will go down as one of the lowest voter turnouts in Canadian history 58.44 % (does not include electors who registered on Election Day)

Youth vote worse. According to @jsbeebe based on past elections, it’s 13-20% lower than national average.

Elections Canada warned, leading up to the election, “physical distancing measures at polling places for both electors and election workers may mean that the voting process will take longer during the pandemic.”

Before election day, Elections Canada told the Vancouver Sun that voters could avoid rush times during the morning before work hours, lunchtime and the hours after daytime work.

“There are always rush times during polling day. It’s an absolute given … So if you need to go at one of those times, then definitely you can expect a line as you would at any election — and they will likely look longer because of the social distancing.”

Hi, @ElectionsCan_E. I understand there are ⬇ polling stations than normal, but some of these assignments seem ridiculous. Not sure if voter suppression, or just horrendous planning, but it’s BAD. Do you have a good explanation for this?

Elections Canada clarified to PressProgress: “Of course, that doesn’t mean that there can’t be higher volumes at other times of the day (or that volumes will necessarily be higher during those times).”

“There are no special arrangements made for certain times of day — our job is to be ready to serve electors whenever they arrive.”