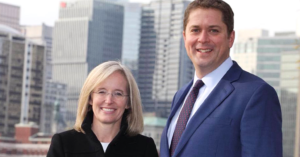 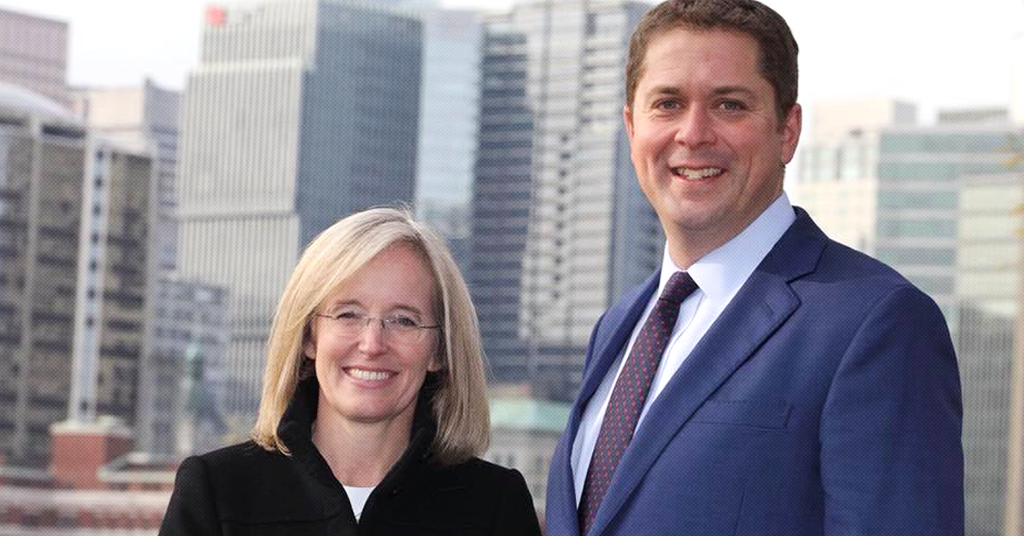 A Conservative candidate, currently under fire for hosting a blackface Christmas pageant, also promoted blogs purporting to show science supports the idea earth was created in six days. At the same time, she cast doubt on Darwinian evolution and climate change research published by NASA scientists.

Cloverdale-Langley City’s Tamara Jansen has been in full damage control mode this week after photos surfaced of a racist “Black Pete” Christmas pageant hosted in 2016 at a greenhouse owned by the Conservative candidate.

Conservative officials were quick to defend Jansen, who runs a plant nursery out of her Langley greenhouse, noting she did not personally wear blackface even though she attended the annual Christmas event hosted at her greenhouse for years. 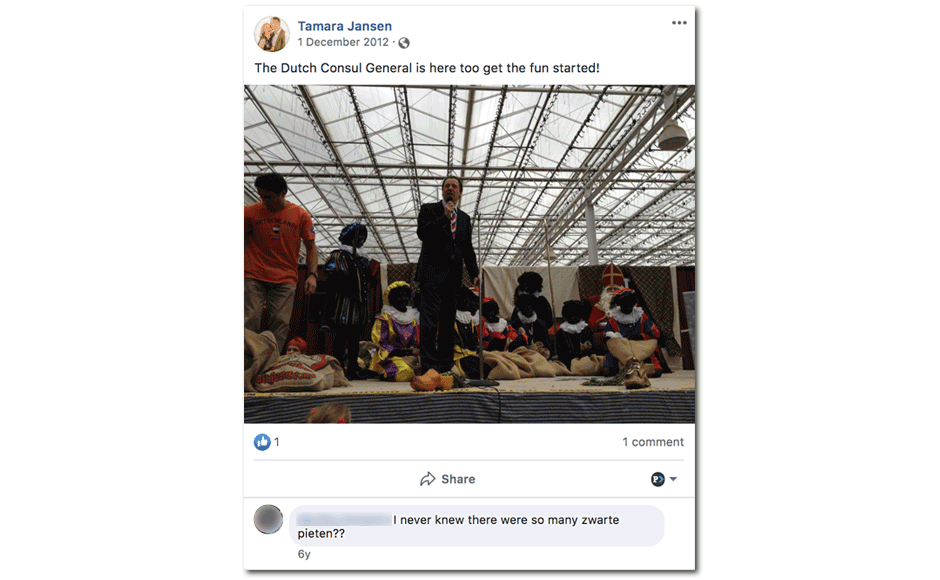 It may not be too surprising Conservative officials would defend Jansen, who hosted an official Conservative Party leadership debate at her greenhouse in 2017.

Jansen is a prominent social conservative and anti-abortion activist who is a senior member of ARPA Canada — a political arm of Reformed Christian churches — which says its mission is to “bring a biblical perspective to our civil authorities.”

The Conservative candidate has been a vocal critic of abortion and assisted-dying, but she’s been outspoken on a few other issues too.

For example, on multiple occasions, Jansen has promoted obscure blogs on the topic of “Young Earth Creationism” — the idea God literally created the Earth in six days only a few thousand years ago.

One creationist blog Jansen shared, titled “a defence of six-day creation,” states: “Yes, scientific theories do appear to discredit that creation account. But be patient. In time it will be seen that those humble Bible believers were right all along: it was a six-day creation.”

“What is the remedy?” the blog asks. “I will tell you that too. A return to God’s Word! We had science for the sake of science, and got the World War.”

“It is entirely true that World War II was, in the deepest sense, a result of widespread acceptance of the doctrine of human evolution,” the blog elaborates elsewhere.

The blog cites the work of a creationist science professor whom Jansen said she was “very honoured” to throw a dinner party for a few weeks earlier.

Another creationist blog that was promoted by the Conservative candidate states scientists have a “blatant anti-Christian bias” and claims there is a “lack of definitive scientific evidence of evolution and an old earth, despite years and years of biased study and the teaching of evolution as fact in schools.”

The blog takes on a wide-range of topics, from fossil records to polymer chemistry, evidence it calls “one of the largest nails in the coffin of evolution.”

Jansen told her Facebook friends it was a “very much appreciated and well-written essay” on “Young Earth Creationism” — “a must read.”

Evolution is a topic of some interest for the Conservative candidate.

Jansen promoted a blog discussing a symposium to reexamine Darwinian theory, billing it to her Facebook friends as a “hinge-busting blow of the battering ram against the reigning paradigm of Darwinian evolution.”

Another anti-evolution blog Jansen called an “interesting read” criticizes Christians who do not take a literal reading of the Bible and attempt to reconcile science with scripture, arguing evolution is incompatible with “the historicity of Adam and Eve.”

The Conservative candidate’s skepticism towards science about the origins of Earth appears to mirror her views on present-day challenges facing the planet.

Jansen fumed about a Business Insider article on the “deadly consequences” of CO2 in the atmosphere hitting the highest levels in recorded history in 2018, dismissing the warnings of climate scientists as “scare mongering,”

Over the last 800,000 years, CO2 in the atmosphere has fluctuated between 170 and 300 ppm (CO2 is measured by “parts per million”, referring to how many parts of carbon dioxide there are in one million parts of air). 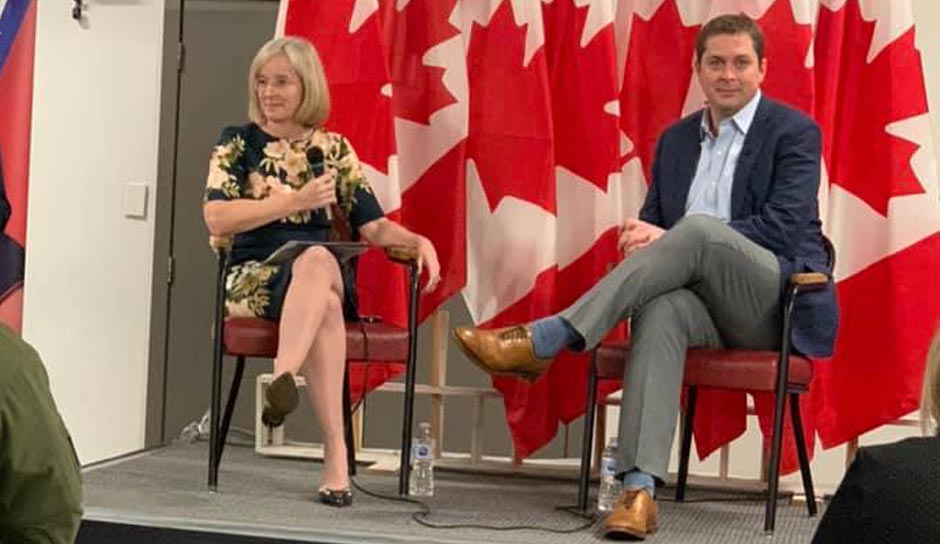 She told her Facebook friends CO2 levels could rise up to 45,000 ppm and everyone would be okay — even though CO2 becomes lethal to breathe around 40,000 ppm.

To underline her point, she offered a personal anecdote from her plant nursery: “Our greenhouse CO2 levels are set for 800 ppm to have any effect on plant growth and would need to be over 45,000 ppm to have any ill health effects.”

Presented with links from “reputable scientific organizations” — including NASA — the Conservative candidate suggested the relationship between rising CO2 levels and dangerous increases in global temperatures is debatable.

“The challenge we have as stewards is to understand the difference between good science and environmental ideology,” Jansen wrote. “All of these links can be interpreted differently and have been by reputable scientists.” 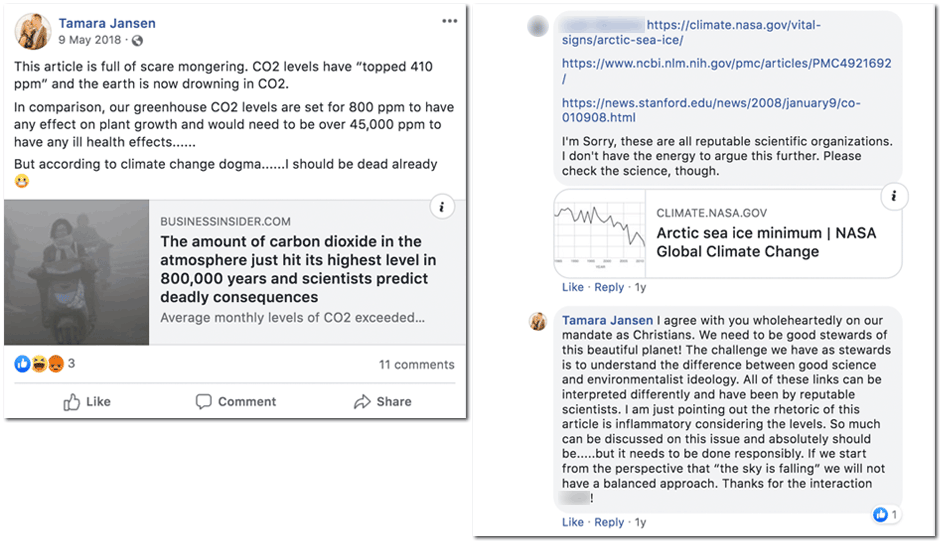 Jansen provided her own rebuttal to NASA’s scientists — a video from the right-wing website PragerU titled “the truth about CO2” that argues “CO2 is not a problem.”

“Fossil fuels are 100% organic,” the video claims. “We should celebrate CO2 as the giver of life that it is.” 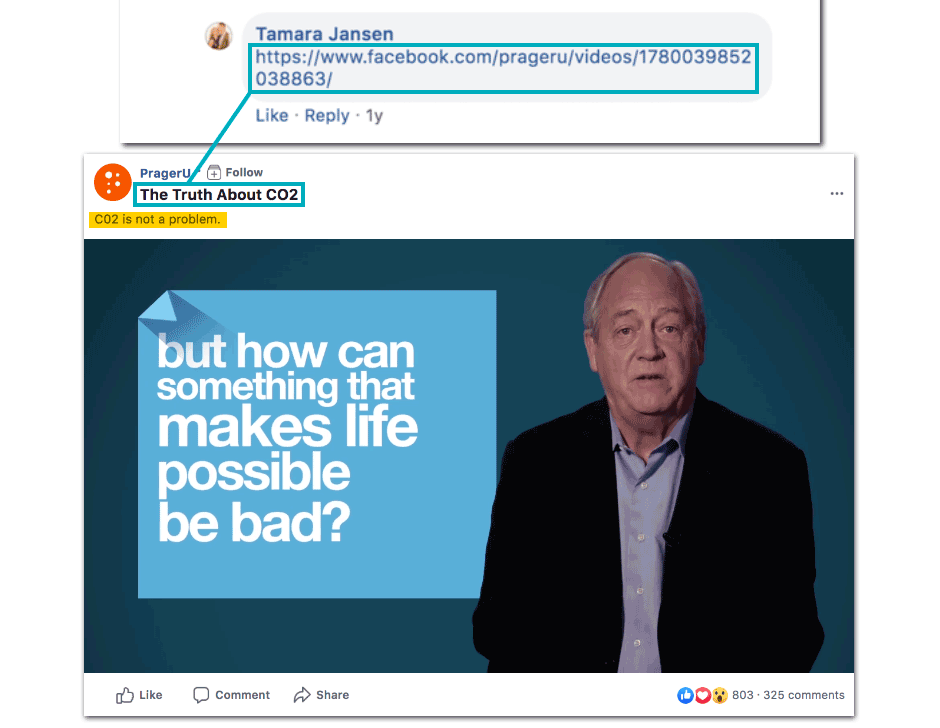 In a statement to PressProgress, Jansen suggested her experience as a farmer has taught her to trust “proven science.”

“As a farmer, keeping our environment healthy is a top priority,” Jansen said, adding “farmers use proven science to increase crop yield and plant health. A successful harvest depends on it.”

Jansen did not respond to questions about her views on creation or evolution.

Conservative Party officials did not immediately respond to a request for comment from PressProgress.