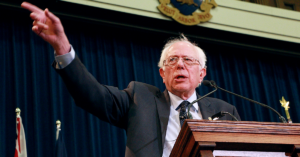 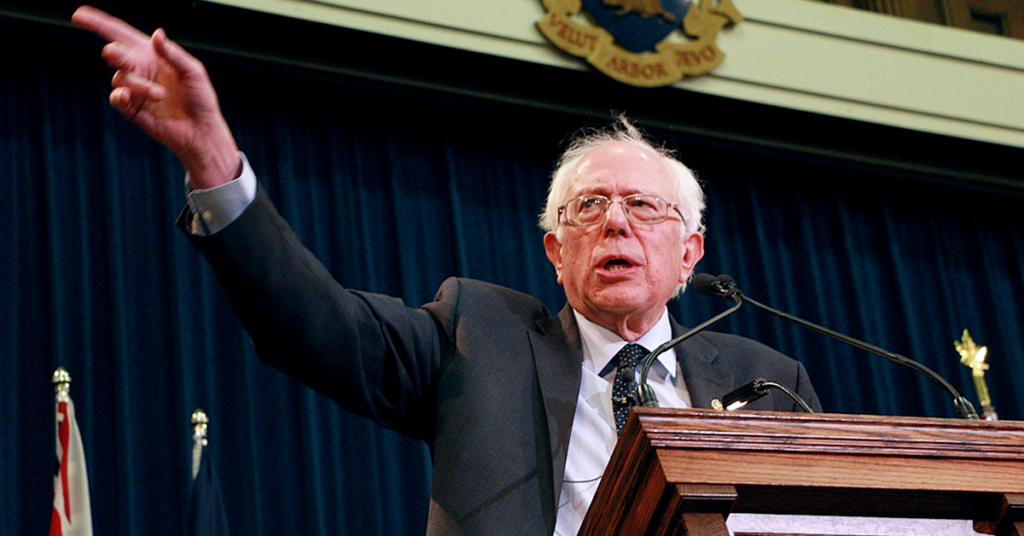 Bernie Sanders on Pharmacare: Big Drug Companies are ‘Ripping Off’ Canadians and Americans

Canada’s public healthcare system is great, but when it comes to prescription drugs Canadians aren’t much better off than Americans, Bernie Sanders says.

Praised as “North America’s leading social democrat” by Broadbent Institute Chair Ed Broadbent at a speech at the University of Toronto Sunday, the Vermont Senator and former U.S. presidential candidate shared what he’s learned about Canada’s public healthcare system during a fact-finding mission over the weekend.

While Senator Sanders called Tommy Douglas’ move to bring public healthcare to Saskatchewan a “historic day” and urged his Canadian audience to “defend with pride what you have achieved,” he also acknowledged Canadians and Americans both need to continue fighting to improve their healthcare systems.

One important challenge Canada and the U.S. share, Sanders said, involves taking on the pharmaceutical industry.

Describing access to life-saving medicine as “a right, not a privilege,” Sanders called out a system that’s “designed to make billions in profit for the drug companies and the insurance companies”:

“Canada is “also paying some of the highest prices in the world for prescription drugs and our job is to tell the pharmaceutical industry that they cannot continue to rip off the people of the United States, Canada or any place else while they’re making unbelievably excessive profits.”

Still wondering if Canada has a problem when it comes to prescription drugs? Here are a few things to keep in mind:

Citing several studies, CBC News reported earlier this year that “Canadians pay the second-highest drug prices in the world after only people living in the United States.”

One big reason drug prices are now so high is because Canada is falling short on “price containment strategies,” notes the Canadian Federation of Nurses Union.

Since the year 2000, Canada has led the world with the highest per capita growth in spending on prescription drugs compared to other OECD countries.

Even compared to other countries with universal healthcare, Canada stands out.

The researchers note “pharmaceutical expenditures per capita in Canada is now 25% greater than the next highest-spending comparator country (Germany)” and “42% higher than the median of comparable health systems.” According to a 2015 Angus Reid poll, prescription drug affordability is a problem for nearly one-quarter of all Canadian households.

One in 10 Canadians don’t take medicine as they should due to high drug costs while one in five spend over $500 each year on prescription drugs.

That’s why Pharamacare 2020 emphasizes high drug costs aren’t only an issue of affordability, they’re also an issue of access and effective health policy:

“Effective prescription drug coverage policy is therefore not about just making sure everyone has some form of insurance coverage. It is about ensuring that every Canadian has effective drug coverage—coverage that provides equitable access to necessary care without financial barriers.”

A national pharmacare program could save Canada billions of dollars

As a recent analysis from Canada’s Parliamentary Budget Office found buying drugs in bulk through a national, universal pharmacare program would save Canada a staggering $4 billion each year compared to the status quo.

Not only would the government save money, as a Canadian Medical Association Journal editorial pointed out, the private sector would be a major beneficiary too:

“Even more striking are the potential benefits to the private sector: no matter what, it would save a lot of money from pharmacare. Currently, nearly half of all drug expenditures in Canada are incurred by the private sector, divided almost evenly between individuals, whose costs would drop by more than half under pharmacare, and private drug plans, whose current costs for nearly all prescription drugs would disappear completely. “

If it’s so cost-effective for both the public sector and the private sector, what’s the hold up? Why isn’t Canada rushing to implement a national pharmacare program?

“The main reason we tolerate higher drug costs is to maintain the presence of drug companies.”