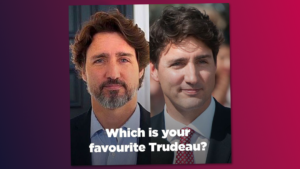 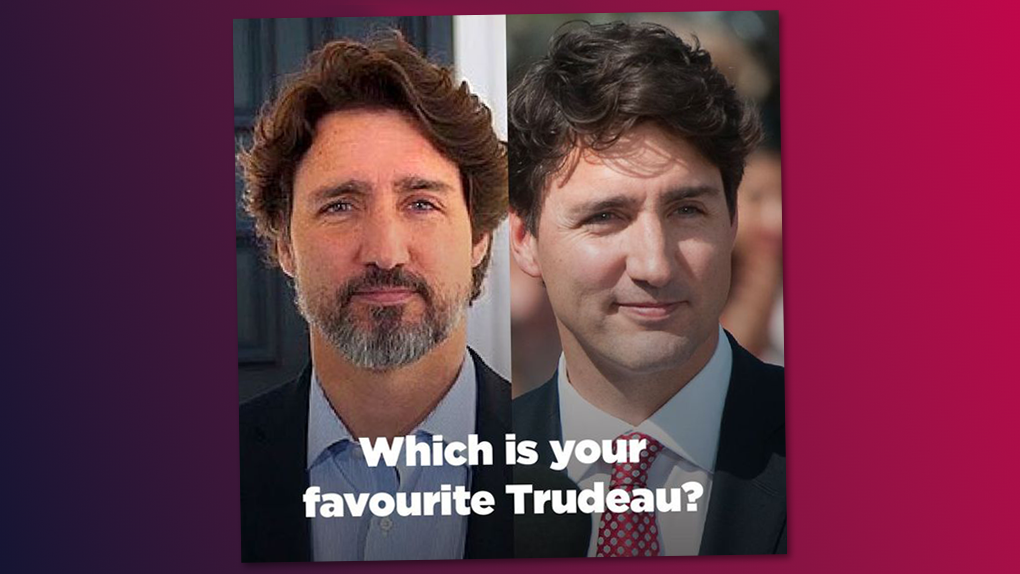 In advance of the 2021 federal election, a big data analytics firm contracted by the Liberal Party of Canada asked ordinary Canadians about top-of-mind issues facing voters at a challenging moment in the nation’s history.

Included among those questions was a top-of-mind issue that no doubt keeps most Canadians awake at night: Prime Minister Justin Trudeau’s facial hair — beard or no?

The ads ran in early June, two weeks before the prime minister made an executive decision to break out the shaving cream and return to a sunnier, clean-shaven look.

Data Sciences is a digital analytics and marketing firm run by Thomas Pitfield, Trudeau’s childhood friend as well as the Liberal Party’s 2015 Chief Digital Strategist and cofounder of the centrist think tank Canada 2020. 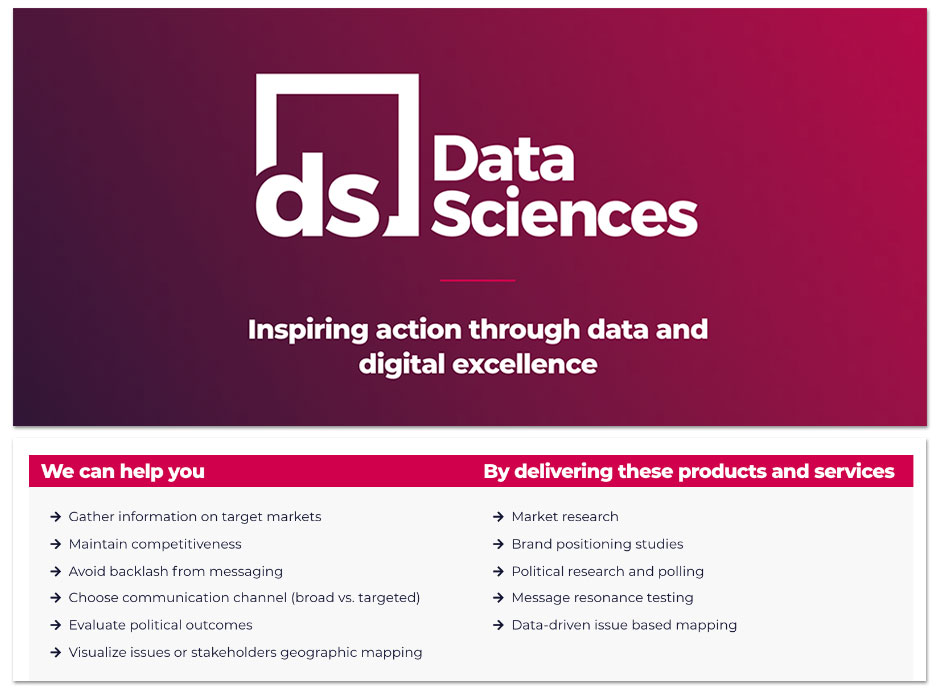 This summer, the Globe and Mail reported 149 Liberal MPs — 97% of the entire Liberal caucus — made taxpayer-funded payments to Data Sciences out of their parliamentary office budgets even though the firm is also contracted to run the party’s digital campaigns and manage the party’s internal database containing details about millions of Canadians .

The Conservative Party demanded an ethics review. The Liberals blocked an attempt to force Pitfield to testify before parliament, though the federal ethics commissioner later dismissed a complaint about one of Data Sciences’ contracts.

At the same time as this controversy was playing out, Data Sciences was quietly running dozens of Facebook ads asking Canadians about hot button issues, including language laws in Québec, attitudes towards vaccines and the Trudeau government’s handling of the COVID-19 pandemic.

The ads link to surveys and do not disclose any relationship between Data Sciences and the Liberal Party of Canada. 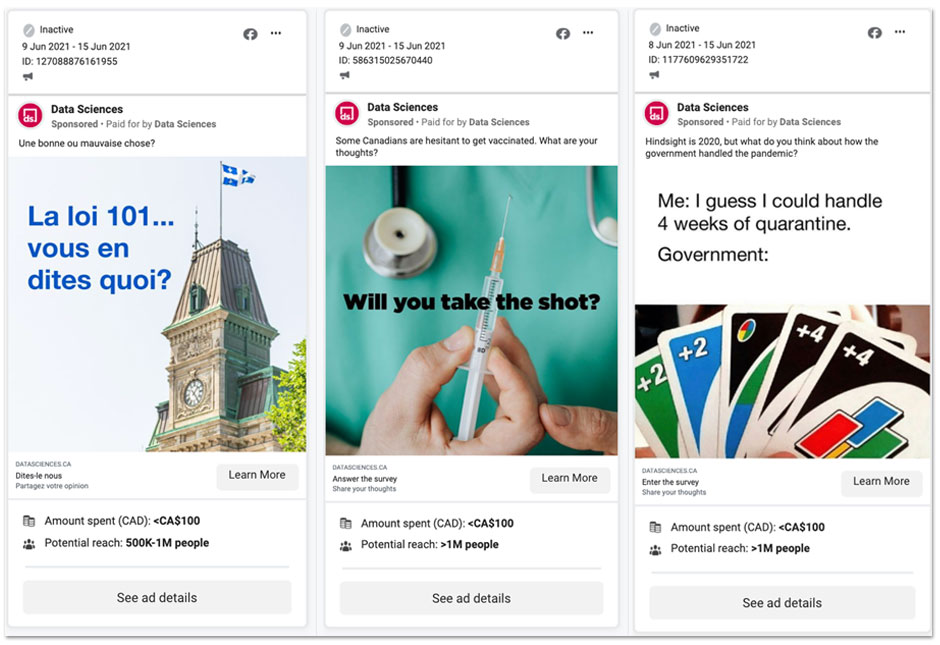 Another set of ads suggest Liberal strategists were also stroking their chins about whether some voters might bristle at Trudeau’s image. 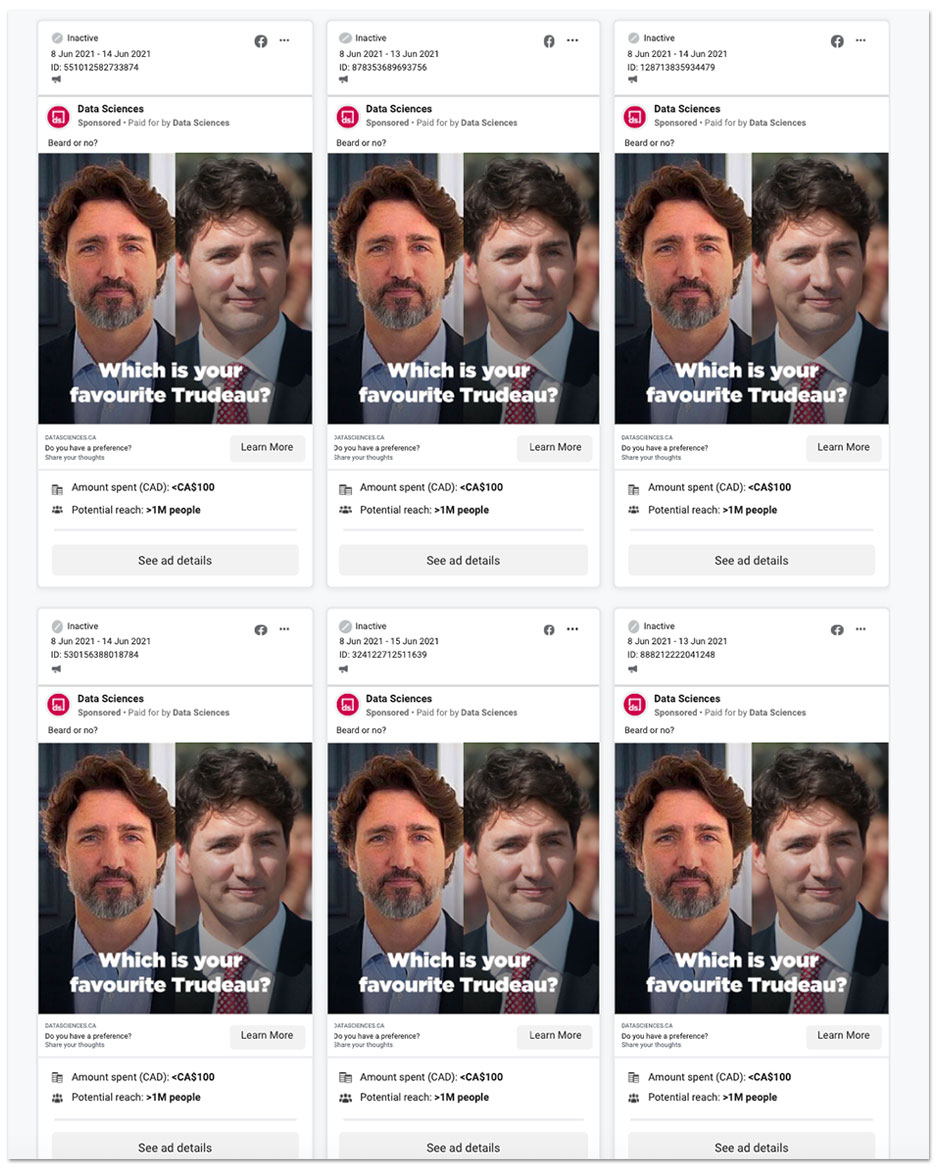 The ads ran on various dates.

All but one of the ads concluded on June 15, 2021 (one Facebook ad appears to still be running nearly three months later).

Demographic data released by Facebook suggests the Liberals were most concerned about what other men thought about Trudeau’s appearance — 72% of the ads were presented to men. 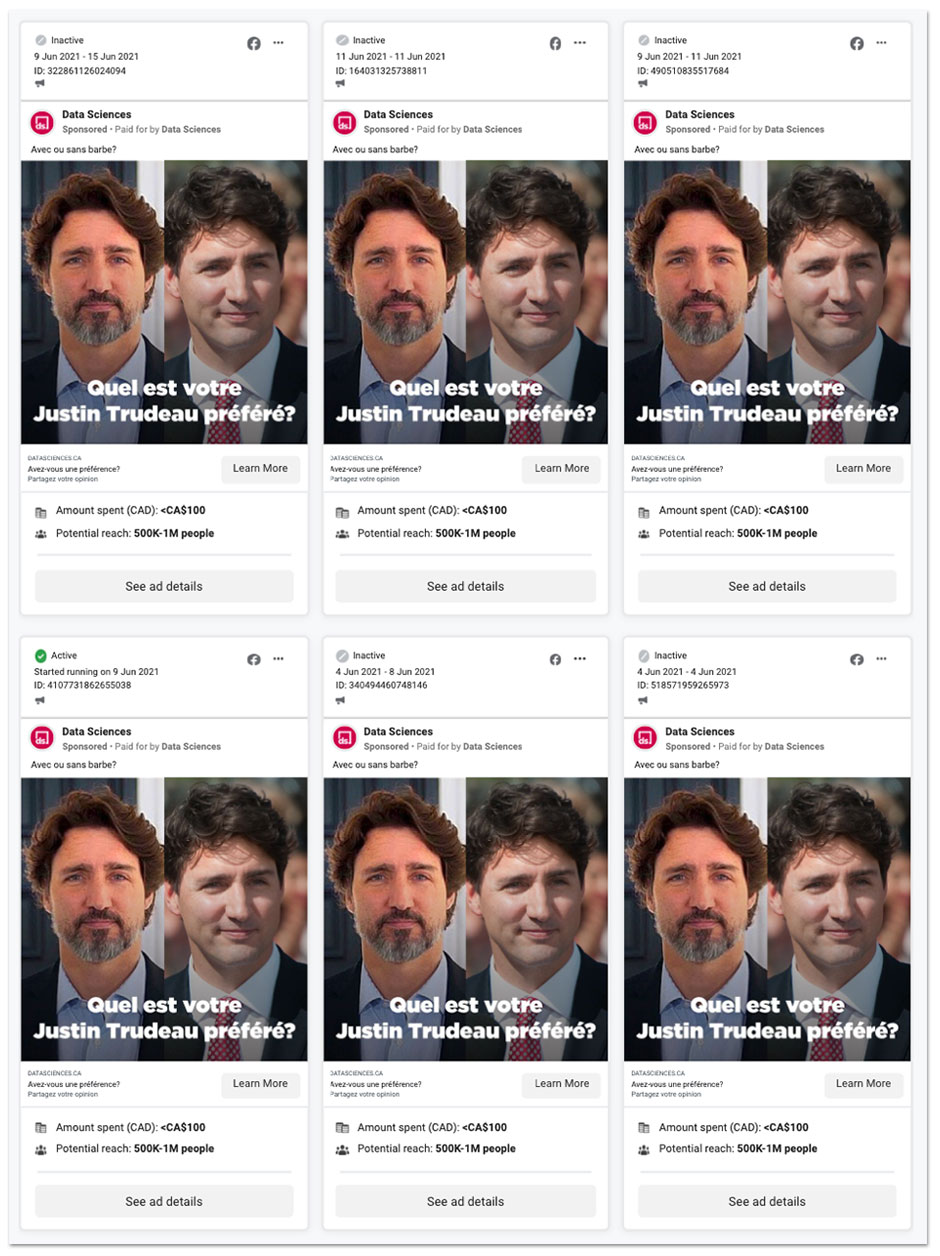 It remains unclear what kind of feedback the ads produced.

However, only two weeks later on June 30, Trudeau unveiled a fresh new look.

Prime Minister Justin Trudeau is about to set off a new flurry of speculation. He shaved his beard.

Trudeau first unveiled his beard following a trip to Costa Rica in January 2020.

The change was among the more polarizing decisions of the last minority parliament, prompting rigorous public debate over whether the prime minister looked statesmanly or like he was having an existential crisis.

It’s not clear whether the beard is here to stay, at least for a while, or just the temporary result of not bothering to shave while on vacation. https://t.co/7PUXdcV69X

Data Sciences did not respond to multiple requests for comment seeking clarification on why it decided to run the ads on the topic and what was the full extent of the firm’s research into Trudeau’s facial hair.

It is unclear how much money Data Sciences spent on the ads, but Facebook’s ad library indicates it has spent nearly $10,000 on ads related to social issues, elections or politics, with the majority of the ads placed in the last year.