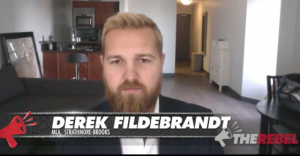 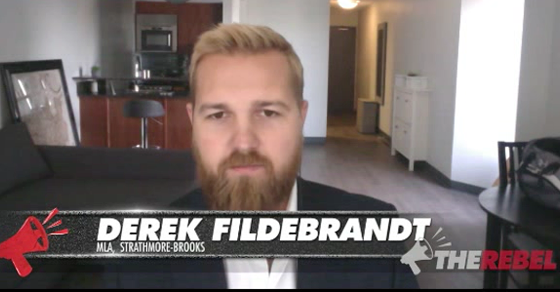 VIDEO: Wildrose finance critic does not ‘give a crap’ about ‘politically correct ninnies’ like Telus

The finance critic for Alberta's Official Opposition would like everyone to know he doesn't "give a crap" about businesses that show support for the environment.

The finance critic for Alberta’s Official Opposition would like everyone to know he doesn’t “give a crap” about businesses that show support for the environment.

During a recent interview with Ezra Levant on the alt-right website Rebel Media, Wildrose MLA Derek Fildebrandt suggested Canadian telecommunications giant Telus and other businesses that publicly support carbon pricing only do so to “show how righteous they are.”

“Telus is not going to pay the carbon tax,” Fildebrandt predicted. “They’re very happy to jump on a bandwagon and virtue signal how nice they are.”

“I’m so far beyond caring what the social justice warriors and politically correct ninnies think anymore. I just don’t give a crap.”

Fildebrandt’s appearance came after Telus was targeted online by Levant and his allies last week.

At that time, Fildebrandt announced on Twitter he was cancelling his contract with Telus after the company voiced its support for “putting a price on carbon”:

. @TELUS I’m disappointed in your decision to back a carbon tax. I am cancelling Telus services for myself & all of my offices. #ableg

Fildebrandt might be interested to learn that Telus is only one of a number of Canadian companies that support carbon pricing, a list including major players in Alberta’s oil and gas scene like Enbridge, Suncor, Shell Canada, Cenovus Energy and TransCanada Corporation.

Is Wildrose’s finance critic prepared to call these companies “politically correct ninnines” too?

In fact, Fildebrandt might be surprised to learn that quite a few companies and organizations currently support carbon pricing:

Fildebrandt has previously voiced his opposition to carbon pricing plans – which were also endorsed by oil companies – on the grounds that “Greenpeace extremists” thought it was a good idea too:

No plan endorsed by Greenpeace extremists like Hudema is likely to be good for working Albertans. #abpoli #ableg

So he opposes plans endorsed by both environmental groups and business groups – realistically, is any plan is good enough for Fildebrandt?

Or is he just virtue signalling?