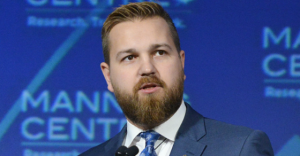 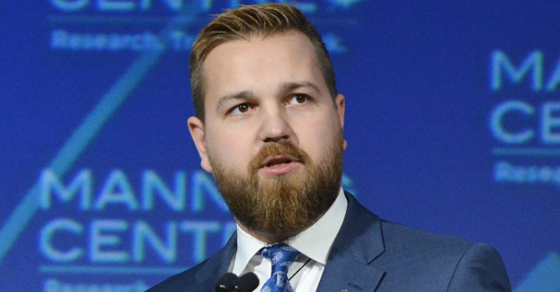 Derek Fildebrandt is causing another headache for Alberta's Wildrose party.

And now for a public service announcement from Alberta’s Official Opposition:

Racist [noun]: someone winning an argument with a liberal or socialist. #ableg https://t.co/532ydf3HAj

That’s the definition of “racist” Wildrose Finance Critic Derek Fildebrandt decided to share with the world over Twitter late on Friday.

Fildebrandt had been attacking a member of an Alberta government advisory group focused on climate change and the oil industry, suggesting a prominent environmentalist was included only as a “wink-wink, nudge-nudge” to Premier Notley’s “radical supporters” (in fact, the advisory group is co-chaired by members representing the oil industry, ENGOs and Indigenous communities).

So, NDP MLA David Shepherd wondered if Fildebrandt is equally concerned by his own appearances on Ezra Levant’s alt-right Rebel Media website too?

As much as your chumminess w/ Rebel is a wink-wink, nudge-nudge to your radical supporters that you’re ok w/ racism/Islamophobia. #ableg https://t.co/vV3l3eK7mq

Rebel Media has long been a close Fildebrandt ally – in 2016, after he was briefly suspended from the Wildrose caucus, The Rebel registered the URL “SaveDerek.ca” and spearheaded a petition pressuring party leader Brian Jean to immediately reinstate the rookie Wildrose MLA.

The alt-right website has a well-documented history of manufacturing racist, anti-immigrant and anti-Muslim resentment.

Rebel Media recently hosted a rally in Toronto denouncing a motion condemning racism and Islamophobia, suggested police and the media were falsely pushing an “official narrative” that “Muslims are victims, not terrorists” following January’s deadly attack on a Quebec City mosque, boosted anti-refugee propaganda produced by a European neo-Nazi group, describes Muslim immigration under the Harper government as a “deliberate act of social and political engineering” and their Alberta “bureau chief” attacked a former Progressive Conservative MLA critical of Jason Kenney for losing to a “gender-queer Colombian immigrant.”

Fildebrandt’s unique definition of “racist” earned this response from the Mayor of Calgary:

Seriously? In the world in which we live today, this is someone who aspires to lead? https://t.co/DdHVPeZxyZ

And judging by the reaction on social media, that sentiment was pretty widely shared:

I’m certain Derek knows what a racist actually is. But this tweet does not reflect well on him or his party. https://t.co/x3IelrUWUw

I tried for 5 minutes to come up with a witty repartee to show how much this angered me but I can’t so I’ll just let you see for yourselves https://t.co/0ydvGydgJh

Wow! This man wants to be considered for the leadership of Alberta. What an embarrassment. #ableg https://t.co/yjirE1th5f

Hey @BrianJeanWRP Are you fine with a colleague trivializing racism? Just asking. #ableg

For his part, Fildebrandt isn’t backing down.

In the aftermath of his tweet, Fildebrandt again tweeted that “I refuse to play by the rules of those who seek to shut down debate by dropping ‘isms'” and told the Mayor “most people” think racism is “just a term to throw around when you’ve lost an argument.”

Wonder what @MaximeBernier thinks of this? Acceptable or unacceptable? https://t.co/buLMS70V1c

Fildebrandt’s social media outbursts have caused numerous headaches for his party and was the reason for his brief suspension from the Wildrose caucus in 2016.

One of he conditions for rejoining caucus was Fildebrandt agreed to hire a social media manager to handle interactions with the public and avoid gaffes, noting he could probably use a 30-second delay on his tweets.