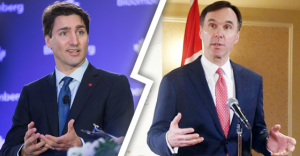 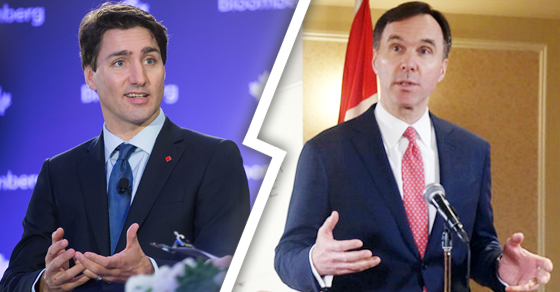 Justin Trudeau and Bill Morneau say precarious work marked by low-wages, job insecurity and short-term contract work is "the new reality" and "we have to accept that."

Is this “the new reality”?

Or is it another new excuse for declining employment standards?

Commenting on people moving “job to job to job,” Morneau said “it’s going to happen. We have to accept that.”

Trudeau, who cast himself as the champion of the middle class during the last election suggested job security is an “archaic” idea and recommended young workers learn to accept “the new reality”:

“Well, I think first of all, recognizing that the workplace is changing, that technological disruptions, the sharing economy, the new reality of the fact that there are going to be, instead of having one job, one career, where you start in the mail room, work your way up to being Vice-President and getting a gold watch when you retire and some archaic vision of it, we’re going to have, actually, multiple careers over the course of our lives.”

Trudeau even suggested changing careers several times could be a good thing because “a lot of people are interested in challenging themselves.”

The comments from Trudeau and Morneau frustrated advocates for precarious workers.

“Telling young people to ‘get used to it’ dismisses the lived reality and insecurity faced by contract, freelance, self-employed and part-time workers across the country,” Stephanie Nakitsas co-founder of the Urban Worker Project told PressProgress.

Others wonder if Trudeau and Morneau’s “new reality” actually reflects this lived reality?

As Canadian Labour Congress senior economist Angella MacEwen recently explained, the problem isn’t that people are jumping from “job to job to job” as Morneau and Trudeau suggest – the problem is employers are increasingly offering workers a series of flexible, short-term contracts at low-pay instead of stable, predictable, long-term employment:

“For many workers, precarity doesn’t mean jumping from job to job – it means not knowing how many hours you can count on next week, it means not having any benefits, it means balancing multiple jobs along with caretaking duties and/or furthering your own education. It means working for the same employer for 5 years, but always on six month contracts. It means unpaid internships are the only kind of internship you can find, or not having any recourse when an employer unjustifiably docks your wages or takes your tips for themselves.”

As for Morneau’s “job churn,” MacEwen notes that the average length of time young Canadians spend working at the same job has remained “remarkably stable since 1976”: Here are a few other things we know about precarious workers:

• Two million workers are ‘own-account self-employed’, meaning they have no paid help;

And a recent report published by the CLC suggests it’s often young workers who bear the brunt of economic precarity:

• Unemployment for workers between the ages of 15 to 24 is nearly double the national average.

• Half of workers between 15 and 24 work part time, one-in-five of are working part-time involuntarily.