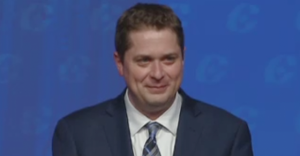 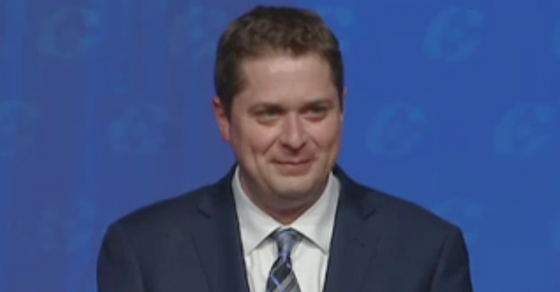 According some of Canada's most "powerful" social conservative groups, the newly anointed Conservative leader can thank the influence of the Religious Right for stacking the vote.

How did Andrew Scheer pull off his surprising come-from-behind victory?

Scheer was named the new leader of the Conservative Party of Canada Saturday after edging out libertarian frontrunner Maxime Bernier on the 13th and final ballot by just under 2% – the result was likely decided by only a few thousand votes.

And according some of Canada’s most “powerful” social conservative groups, the newly anointed Conservative leader can thank the influence of the Religious Right for stacking the vote in his favour by signing up over ten thousand new members who want legislation opposing women’s reproductive rights.

After the final results were transmitted, Campaign Life Coalition – one of Canada’s largest and most controversial anti-abortion groups – immediately released a statement celebrating the result.

Campaign Life, which also orchestrated protests against Ontario’s sex-ed curriculum a few years ago, took credit for signing up “more than 11,000 memberships” and running a “strong get-out-the-vote campaign” to help advance the group’s social conservative agenda:

“Campaign Life Coalition congratulates Andrew Scheer on becoming Leader of the Conservative Party. The results of the race demonstrate the strength of the social conservative movement and importance of pro-life and pro-family voters. The principled, bold social conservative candidates Brad Trost and Pierre Lemieux finished in fourth and seventh respectively, and Andrew Scheer, who has a pro-life voting record, won. CLC sold more than 11,000 memberships to supporters in every province and territory, covering 303 ridings, and ran a strong get-out-the-vote campaign.”

Likewise, the anti-abortion group Right Now – a group that describes itself as an “organization committed to nominating and electing pro-life candidates” – released a statement calling Scheer a “strong pro-life candidate” and also took credit for tipping the scales by selling “thousands of memberships”:

“RightNow sold thousands of memberships throughout the leadership campaign, encouraging pro-life voters to fully rank their ballot with all 10 candidates. Rankings were based off three criteria; pro-life voting record, winnability and policies and positions moving forward that were based on an interview with the candidate conducted by the organization.”

The same group has previously worked behind the scenes stacking riding nominations to elect a pro-life teenager as an Ontario Tory MPP and helped sign up new members in support of Jason Kenney’s bid to takeover the Alberta PCs – earlier this year, the group took credit for electing Conservative MP Stephanie Kusie as Kenney’s replacement.

However, the group’s co-founder Alissa Golob actively boosted Scheer on the Conservative convention. And following Saturday night’s announcement that Scheer would be the new leader, Golob only had one message to share with her Facebook followers: “we won.” Although Scheer now wants to portray himself as moderate and “middle-of-the-road,” suggesting his government would not table legislation reopening the abortion debate, Scheer’s advocates have been quietly telling social conservatives something different.

“Andrew Scheer has said that the government will not introduce legislation on abortion. When leadership candidates (or even elected leaders) of political parties say that, it means the cabinet. Let’s say the Conservatives win 180 seats in the next federal election and of the 180 MPs, 30 of them are in cabinet. That means 150 other Conservative MPs would be allowed to introduce a private members’ bill on this. He also never said that he would whip his cabinet not to vote for pro-life motions or bills nor did he say he himself would not vote for them either.

According to Andrew Scheer, it is up to us to bring up our issue. Andrew Scheer is not wrong when he says that the caucus as a whole and the Party’s policy statement declare that the Party does not want to re-open the abortion issue. So let’s change that!”

Meanwhile, other policies Scheer rolled out during the campaign also look like dog whistles for social conservatives.

“And then there’s a policy that, if implemented, would be an enormous victory for pro-life activists across the country: Scheer’s promise to deny federal grant money to universities that refuse to protect free speech. Scheer specifically refers to the treatment pro-lifers have received on campus.”

While Right Now praises Scheer as “a strong pro-life candidate,” Campaign Life gives the newly anointed Conservative leader a perfect score on “pro-life” issues, stating “Scheer has an impeccable voting record on life and family issues during his long career as a federal MP.”

As Scheer himself told an anti-abortion website just last month:

“I have always voted in favour of pro-life legislation.”