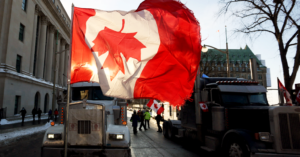 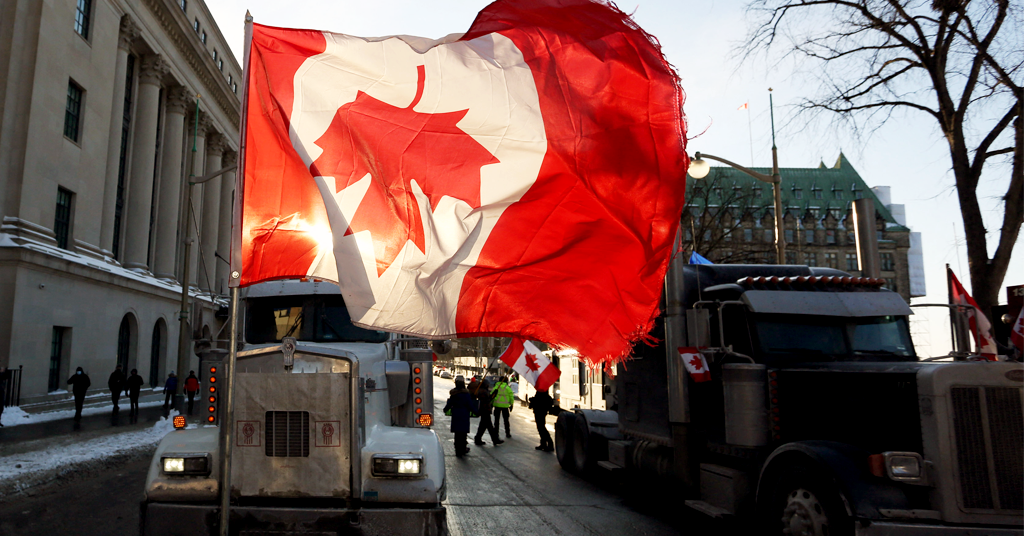 ‘We Are Fed Up’: Wealthy Business People Who Donated to Far-Right Convoy Believe They Are Oppressed

What do a Bay Street investment banker, a Vaughan real estate mogul and the owner of an educational website focused on vaccines and UFOs have in common?

A list of top donors to the anti-vaccine “Freedom Convoy” reviewed by PressProgress suggests the convoy received significant chunks of money from wealthy business people and incorporated businesses.

The convoy, which is spending its third weekend occupying the streets of downtown Ottawa, raised over $10 million through GoFundMe before it was shut down on February 4 for violating the platform’s Terms of Service prohibiting the “promotion of violence and harassment.”

Many of the wealthy donors that bankrolled the so-called “Freedom Convoy” say they stand behind their donations. Some want to see a change in government while others warn the occupation could be Canada’s last hope before “civil war.”

The GM of Evan’s Trucking, which contributed thousands of dollars to the convoy’s GoFundMe, told @pressprogress he is willing to take up arms if he is forced to get vaccinated.

One thing these wealthy donors agree on is that they are being oppressed — some even liken the situation to “communism.”

Here is a round up of some of the big money donors.

Marine Tech Industries, a Surrey-based ship repair company, which supplies parts to Hyundai, Fukushima, Mitsubishi and other top companies donated $5,000 to the convoy.

Asked why he made the donation, Jakubow told PressProgress that “at this company we are fed up with all of this bullshit – mandates and all these lies about this COVID.”

“We love freedoms,” Jakubow explained. “Our roots are from communist countries. We know what is going on for the last two years. It reminds me of communism.”

“The past two years, it’s started becoming a communist country. We have dictators on the federal and provincial level.”

“All the restrictions there were not based on science, they are based on political science,” Jakubow said, adding Justin Trudeau is having his strings pulled by people who are “smarter than Trudeau.”

“Trudeau doesn’t have the power,” Jakubow said. “Without our votes, Trudeau would still be a drama teacher in the schools.”

The convoy received $3,300 from Axis Slinger and Telebelt, a sand and gravel supplier in West Kelowna, BC.

The company’s owner, who only identified himself as “Jason,” confirmed the donation, explaining that while they are not opposed to vaccines in general, he doesn’t like that it’s “forced.”

“It feels like communism when it’s being forced,” Jason said

Jason added that he thinks the convoy has been “pretty peaceful” but suspects that’s “going to change when Trudeau sends his lackeys.”

“Trudeau is – not to say a dictator – but he’s passed a lot of laws that are disagreeable and I don’t believe in his leadership.”

According to donation records, the Winnipeg-based metal fabricator shop donated $2,500 to the convoy.

A company spokesperson confirmed to PressProgress they made the donation:“I hope they get Trudeau out of there or at least stop all the mandates.”

Jason Shurka, a New York real estate investor and vice president of Signature Investment Group founded UNIFYD.com in 2021, an online learning “hub” featuring material on vaccines, UFOs and other conspiracy theories. According to donation records, UNIFYD donated $10,000 to the convoy. 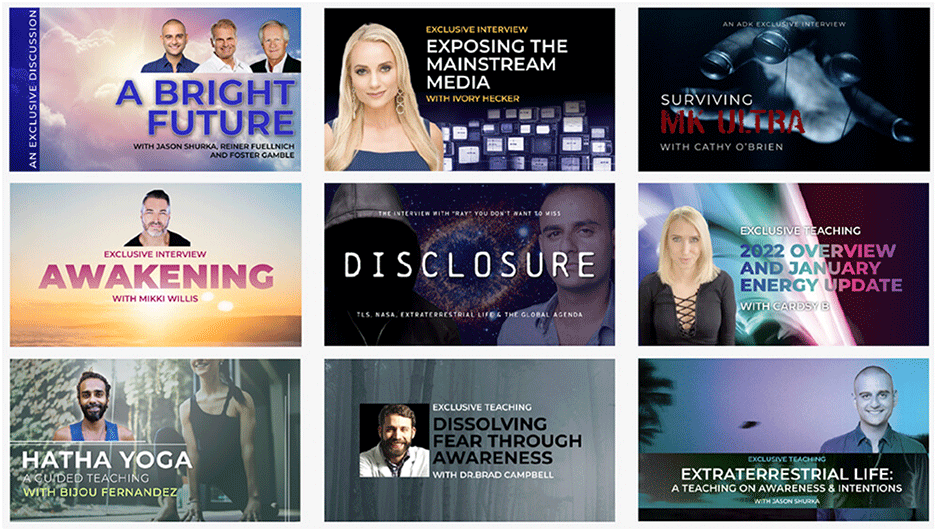 In a YouTube video, Shurak lauds the convoy as “the biggest ever convoy in history” and applauds Canadians for “standing up to regain their freedoms.” To that end, he announced he was donating $10,010.10 to the convoy – “this incredible cause of freedom.”

Shurka is also an author. His self-help book, Rays Of Knowledge, promises to help readers along with “in-depth knowledge” about a “spiritual phenomenon received from the Divine underground organization, known as The Light System” who have “been around for thousands of years” and “do very divine work.”

Shurka claims the TLS group includes celebrities and politicians of all ages and races – “covering not just human races.”

Les Buzzell, the CEO of ESI Rail, a railway signal repair and installation company in Sunnyside, Manitoba, confirmed to PressProgress he donated $5,000 to the convoy.

Buzzell, who is not vaccinated,  cheered the anti-vaccine convoy on when it visited Winnipeg.

“When the truckers came through Winnipeg here, it was just unbelievable the vibe and the people there, it was like Canada Day,” Buzzell recalled.

Asked about the blockades, Buzzell admits they “could have went about it a different way,” but said “we’re just not getting anywhere with these protests on the street so maybe we have to go a little bit harder. They’re doing what they have to and I respect it and I’m for it.”

A past supporter of the People’s Party of Canada, Buzzell had choice words for Prime Minister Trudeau. “I have no time for it. When you have a Prime Minister who doesn’t even show up to hear anything? It just shows me what kind of man he is.”

Although he identifies as a conservative, Buzzell said he believes conservative parties at all levels are secretly managed by Trudeau. “They’re all the same. To me, provincial level, federal level, mayors and all that, there’s not one in Canada who has stood up for the right-wing – not one,” Buzzell explained. “They’re all in Trudeau’s pockets.” 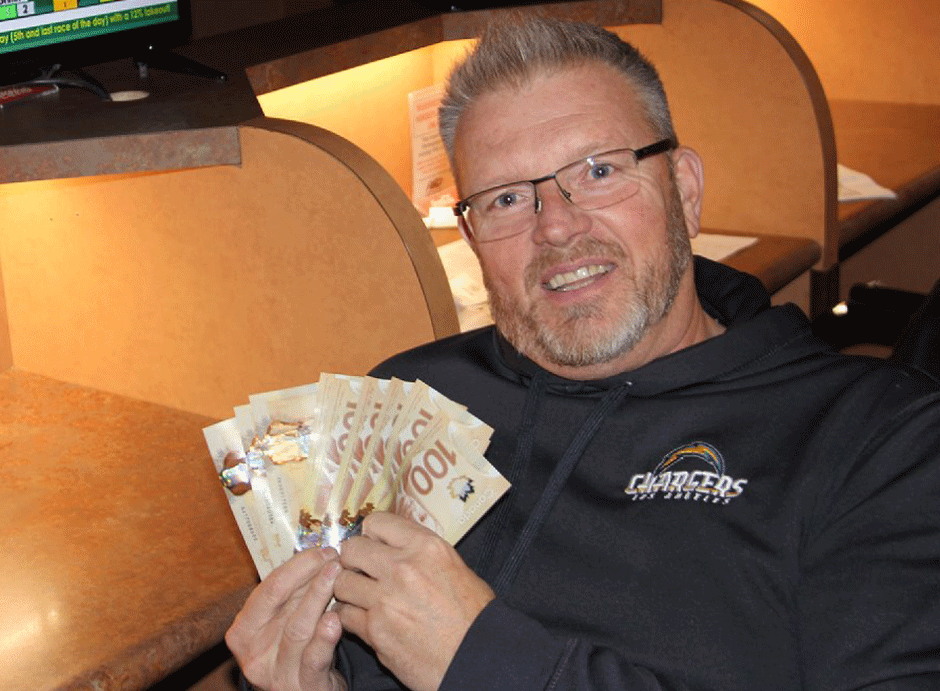 All Ontario Recycling, a scrap yard located in Huntsville, Ontario, gave $5,000 to the convoy.

Melinda Simon, who works in the company’s accounting department, confirmed: “We were asked to do it by the owner of our company. We haven’t been questioned at this end.”

“We are just trying to support our truck drivers because that’s what we do,” Simon said.

While the owner in question did not attend the rally, Simon clarified that’s because “he is out of the country at the moment.” The company’s website identifies Kevin Primmer as its president.

According to GoFundMe, Times Realty Corp, a Vaughan-based real estate firm, also donated $3,500 to the convoy.

A company representative told PressProgress the donation was most likely made by owner Vladimir Reznik.

Reznik independently confirmed he made the donation and that he has received a refund from GoFundMe.

“My opinion on the convoy is evolving every day,” Reznik told PressProgress. “It’s made up of many groups just like the government.”

On Facebook, Reznik has cheered on the convoy creating gridlock in downtown Ottawa. He has previously shared content from the American far-right website Newsmax and suggested that COVID-19 is really about a microchipping the population. 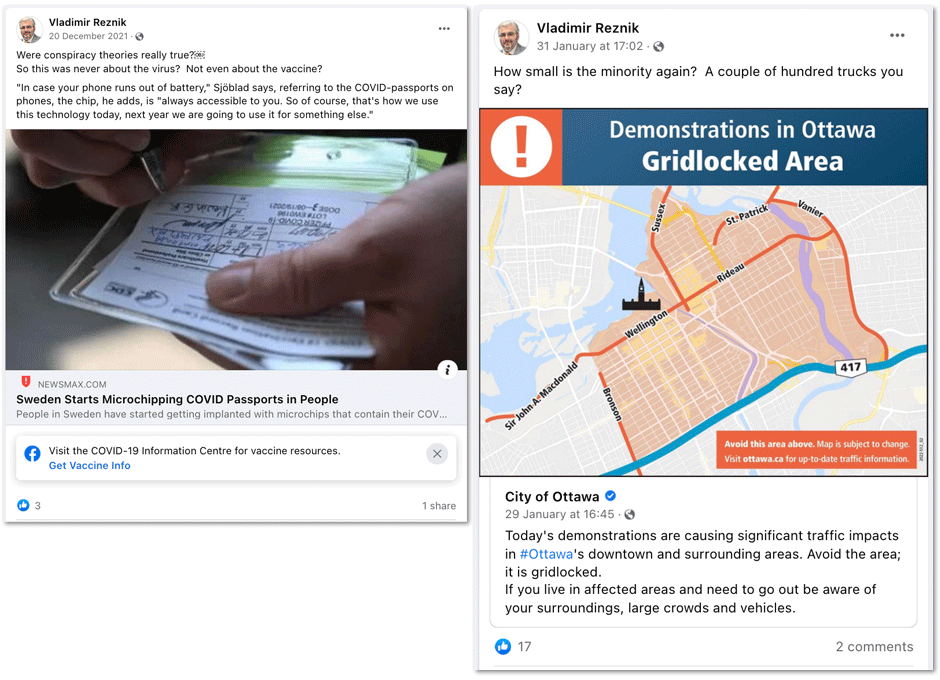 According GoFundMe’s donation records, the convoy received an additional $5,000 from Milman Industries – an international logistics and industrial equipment company, based in Sudbury, Ontario.

“I’m aware of it, yes,” a company representative said confirming the donation, but they said: “I’m not entirely sure of the exact details of who made it.”

The company did not respond to several subsequent requests for comment from PressProgress.

According to the Georgia Straight, the owners of Canada’s largest indoor shooting ranges for licensed and unlicensed firearms enthusiasts alike, donated $18,000 to the convoy.

That makes the range – which describes itself as “owned and operated by active and retired Canadian military and law enforcement” – one of the convoy’s largest donors.

In a statement posted to its website, the company said:

“Our donation to the Freedom Convoy 2022 is our way of peacefully participating in democracy. For whatever reason, some may disagree with our beliefs and support for this cause. That is their Right. We will always defend the Rights of those that disagree with us and encourage them to build on their own beliefs rather than allowing them to destroy ours. Conversely, we warn all Canadians to be aware of anyone that accuses their dissenters as being “dangerous” and use such labels as justification to take their Right to peaceful protest away.”

Asked about this statement, General Manager and former Infantry Sergeant Andrew Trafananko, did not respond.

“I just believe in their cause,” Metcalfe told PressProgress.“We need freedom of choice.”

“This is the most peaceful demonstration that has ever happened and probably the largest in Canada, as well,” Metcalfe said. “And it’s just not getting fair media coverage. It really isn’t.”

Asked about the sightings of confederate flags, Metcalfe said “that was an outsider. It’s ridiculous to even bring that up.”

Metcalfe said she hopes both Trudeau and Ontario Premier Doug Ford resign “He’s not standing up for what his constituents believe in,” Metcalfe said of Ford.

According to GoFundMe Records, $5,000 came to the convoy from National Bank Portfolio Manager Murray Wedge.

Asked why he made the donation, Wedge told PressProgress: “What do you care? It’s none of your business why I made the contribution.”

“You sound like a fake reporter,” the portfolio manager continued. “Don’t call me again and stop asking questions.”