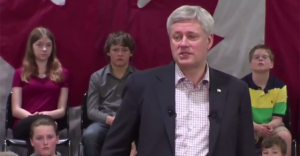 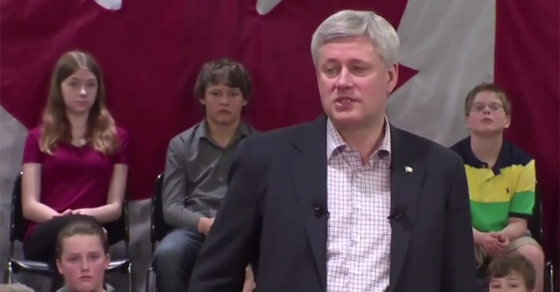 Never let the facts get in the way of a good stump speech.

Prime Minister Stephen Harper was up to that old trick again, bragging about the government’s jobs record at a recent campaign-style stop.

With a group of less than enthused children as his backdrop, Harper had a few howlers for the kids:

Yes, the fact that more Canadians are working is technically true. But only because there are more people living in Canada now than, say, in 1867.

So there are more workers, but the employment rate — representing persons in employment as a percentage of the working age population — is actually down.

Nice try – boasting about job creation since “the depths of the recession.” It’s easy to look successful when you’re measuring against failure.

But if you look at the Conservative record since the beginning of the recession in September 2008 – instead of from the extreme low point – Canada isn’t doing so well.

In 2009, the unemployment rate hit 8.3%. The modest recovery since has in large part been fuelled by the growth of part-time and precarious work. In March of this year, for example, the economy created 29,000 net new jobs, an upswing largely due to the creation of nearly 60,000 part-time jobs.

In fact, the percentage of Canadians with a job is as low today as it was at the lowest point of the recession 5 years ago.

Last month, Statistics Canada pegged the rate of unemployment at 6.8% — which is exactly where it was in 2005 just before Harper took office, and a far cry from the record low of 2.9% in 1966. Moreover, if we factor in involuntary part-time workers, Canada’s current unemployment rate is actually 9.9%. So much for that economic miracle.

It seems Canadians aren’t buying Harper’s lines on the economy either.

A recent EKOS poll conducted for iPolitics found that a full 67% believe the country to be in an economic recession or depression. A majority also said they felt the country is moving in the wrong direction. A new report prepared for the Prime Minister’s Office discovered the one word Canadians think best describes the economy under Harper: “uneven.”