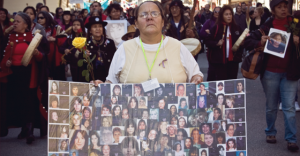 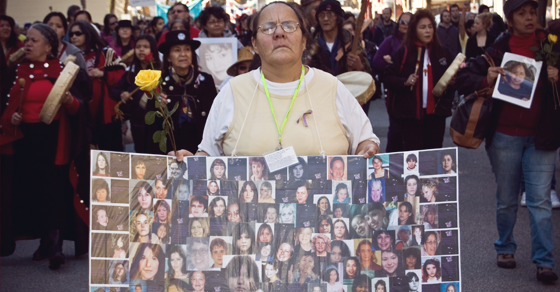 The Conservatives just don’t get it. Responding to a new report that recommends a national inquiry into missing and murdered indigenous women, MP Susan Truppe, parliamentary secretary for Status of Women, told CBC News’ Evan Solomon “I don’t know why” First Nations chiefs would want an inquiry. Truppe added that she’s only ever heard “one family member” […]

The Conservatives just don’t get it.

Truppe added that she’s only ever heard “one family member” of a victim call for an inquiry at a committee hearing and claimed “there’s as many people who don’t want a national inquiry” as those who do.

Odd that Truppe says she doesn’t “know why” First Nations leaders want an inquiry, given their repeated testimony at committee meetings she has attended over the last year or two (see here, here, here, here, and also here).

Why are so many voices calling for an inquiry?

The report authored by the Inter-American Commission on Human Rights (IACHR) says it “strongly supports” a “nationwide inquiry into the issue of missing and murdered indigenous women and girls,” in order to “fully understand” gaps in public policy, including “an analysis of deeply rooted and interrelated factors such as colonialism, racism and conditions of poverty.”

Noting that “indigenous women are significantly over-represented as victims of homicide” and “three times more likely to be victims of violence than non-indigenous women,” the report suggests the phenomenon of missing and murdered indigenous women is inseparably linked to a “history of discrimination” rooted in colonial policies like the Indian Act and residential schools, resulting in “serious consequences for generations of indigenous people who survived it, in terms of social dislocation, the breakdown of families and communities, and trauma for former students.”

One consequence of this history is that indigenous women and girls “constitute one of the most disadvantaged groups in Canada,” while “poverty, inadequate housing, economic and social relegation” have contributed to their “increased vulnerability to violence.”

On the other hand, Prime Minister Stephen Harper doesn’t appear to think history or socio-economic factors have anything to do with it. “I think we should not view this as sociological phenomenon, we should view it as a crime,” Harper controversially said about missing and murdered indigenous women in August, responding to the murder of 15-year-old Tina Fontaine. (More recently, Harper said the issue of a national inquiry isn’t even on his “radar.”)

In her CBC interview, Truppe explained her disbelief in desire for an inquiry by citing the government’s legislative tough-on-crime “action.”

The Conservative response follows a familiar pattern of always choosing “punishment” as a knee-jerk reaction over what “empirical evidence” from criminologists and sociologists actually shows, as the late criminal lawyer Edward Greenspan put it.

But there’s a flaw with the ‘tough-on-crime’ approach in addressing this issue: “Family members of missing and murdered indigenous women have described dismissive attitudes from police officers working on their cases,” the IACHR says of “irregularities and deficiencies” in the way laws are enforced, adding that “a lack of adequate resources allocated to those cases, and a lengthy failure to investigate and recognize a pattern of violence” leaves them “underprotected.”

On Monday, Kellie Leitch, the minister for status of women, said the government was reviewing the IACHR report’s findings.

Offering more food for the government’s thought, two Canadian aboriginal and poverty experts from organizations that contributed to the IACHR report have outlined four ideas that can help better protect Canada’s indigenous women — one of their key recommendations is to hold a national inquiry.