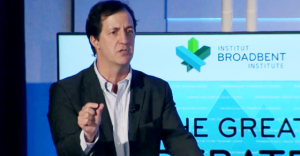 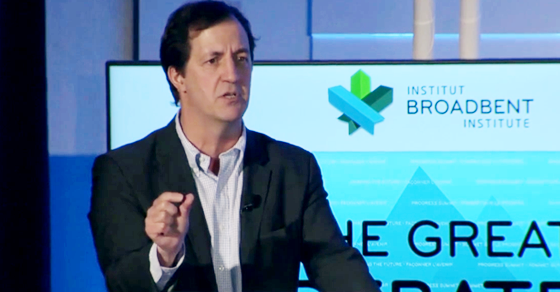 And the National Post columnist needed only five minutes to explain why during a debate on electoral reform at the Broadbent Institute’s 2016 Progress Summit last weekend:

Along with former Clerk of the Privy Council Alex Himelfarb, Coyne advocated moving away from Canada’s current first-past-the post system – a system he suggests “violates some pretty fundamental principles of democracy” – in favour of proportional representation.

The Liberal Party’s platform promised that “2015 will be the last federal election conducted under the first-past-the-post-voting system,” but as Coyne’s latest column points out, “the suspicion lingers that more powerful figures in the prime minister’s office would not be overly concerned if it died the same death as other Liberal promises.”

But as far as Coyne’s concerned, maintaining the “status quo” should be out of the question.

“What I want to suggest is that many of the frustrations we have with how our politics works or doesn’t work are not inevitable but are products of that system, that the method of voting we think of as ‘normal’ is, in fact, highly abnormal, that indeed it violates some pretty fundamental principles of democracy.”

“Forgive me, but I think this is a pretty non-trivial objection: rule by the minority over the majority. We wouldn’t put up with it, say, in Parliament. If someone were to try to pass a law with the votes of only 39% of the Members of Parliament, I’d be willing to bet there’d be riots. So how is it any different if MPs representing only 39% of the people do likewise?”

“If ballots were issued to some voters but not others, or in packs of two or nine or twenty-nine, depending on which party you voted for and what riding you lived in, there’d be riots in the streets … In some provincial elections, the same phenomenon results in one party winning all seats in the house, or nearly so. What kind of democracy is one party and no opposition?”

“In sum, the present system allows the minority to rule over the majority, it gives some voters many times the voting power of others, it denies many voters the right to vote for the party of their choice and wastes the vote of many others. Oh, and it nearly killed the country a couple times, besides.

Other than that, it’s a pretty good system.”