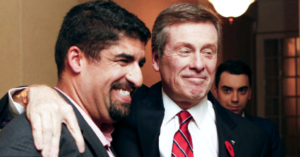 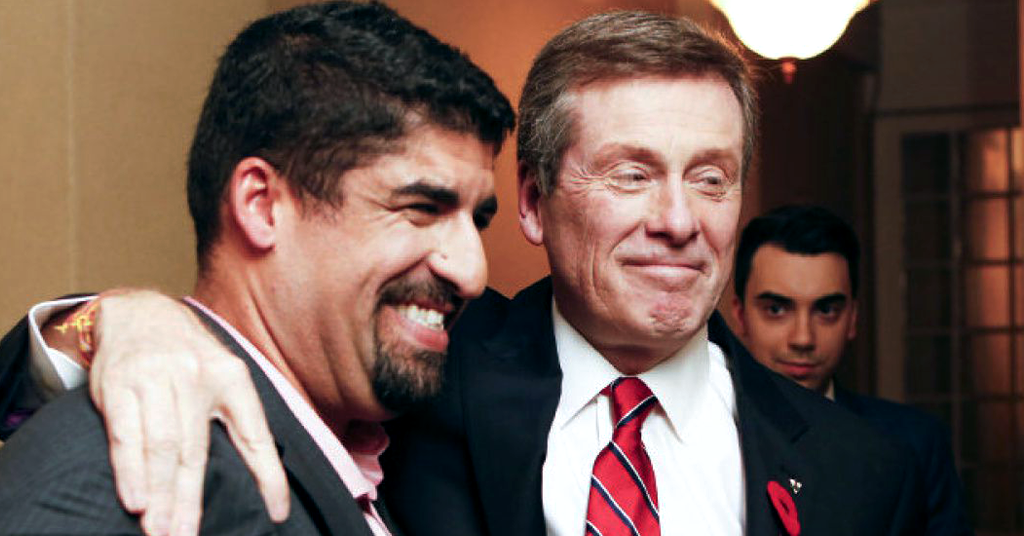 Bad enough Canada’s biggest city is heading towards a chaotic municipal election after Ontario Premier Doug Ford pulled a “tinpot dictator” move, vowing to remove half the seats from City Hall and redraw the city’s boundaries with no consultation only a few months before Toronto casts its votes.

Now Tory is set to introduce more chaos into the mix by bringing back on board the architect behind Rob Ford 2010 run for mayor and Kellie Leitch’s 2017 anti-immigrant campaign for leader of the Conservative Party of Canada.

While Kouvalis’ campaign role remains unclear, Tory’s decision to partner with him again is sure to raise questions – particularly since Tory likes to portray himself as a moderate, middle-of-the-road kind of mayor.

Kouvalis has had multiple run-ins with the law, most recently facing a break-and-enter charge after police found him “visibly intoxicated” inside a Hamilton-area Kelsey’s restaurant after hours in 2017. Charges were later dropped in a plea deal.

Last year, Tory publicly condemned Kouvalis for the divisive, anti-immigrant tone of Leitch’s leadership campaign, vowing he would never “engage in anything that divides people or causes people to be anxious about one another” as Kouvalis did.

But in the next breath, Tory refused to rule out re-hiring his “friend” Kouvalis in the future.

This is the best question that anybody has ever asked John Tory: pic.twitter.com/hHfIbkO0ad

Considering Tory ran as the supposedly anti- Ford candidate in 2014 and is now again supposedly standing up to Premier Ford’s attack on local democracy, it seems strange that Tory would hire someone who Doug Ford calls “loyal” to the Fords.

Here’s a look back at Kouvalis’ greatest hits over the years:

As campaign manager, Kouvalis helped enable Rob Ford’s 2010 election as mayor and, after that, went on to serve as Mayor Ford’s chief-of-staff.

Ford’s mayoralty becomes the most divisive and destructive in Toronto’s history, culminating in serial corruption, dishonesty, and chaos.

One highlight from Kouvalis’ time as Ford’s campaign manager that would echo his later work includes the time Ford argued that Toronto, a multicultural city of immigrants, should halt immigration altogether:

Kouvalis was the architect of Leitch’s xenophobic campaign, which included a proposal to force immigrants to pass an ideological purity test for “Canadian values.”

The idea was so poorly thought through, anyone who shares the same opinions as Catholics or Conservative MPs would have been banned from immigrating to Canada.

Kouvalis later admitted it was part of a deliberate strategy to scapegoat immigrants to target voters nearing retirement age who feel like the system has become “unfair.”

Leitch’s campaign ended up being a big dud, coming in a distant seventh place.

Kouvalis also caused controversy by spreading false information and later boasting  he had done so deliberately to “make the left go nuts.”

Kouvalis eventually resigned from the campaign after a late night Twitter meltdown that saw him accuse constitutional scholar Emmett Macfarlane of treason and denounced him as a “cuck” – a racially charged term popular among the alt-right. Although Tory previously said he was open to giving Kouvalis another chance, it’s not clear Kouvalis ever learned his lesson.

Even during his time-out period, Kouvalis has still continued to associate with far-right fringe elements and amplified sentiments like “mass Muslim migration will destroy Canada as we know it”:.

I do suppose that — far from being disqualifying — retweeting such sentiments as “Mass Muslim Migration will destroy Canada as we know it” is pretty much the new baseline for getting to be a conservative campaign strategist. pic.twitter.com/Fg5HMfHcuY