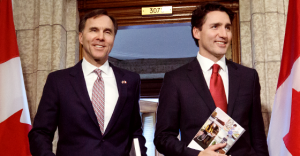 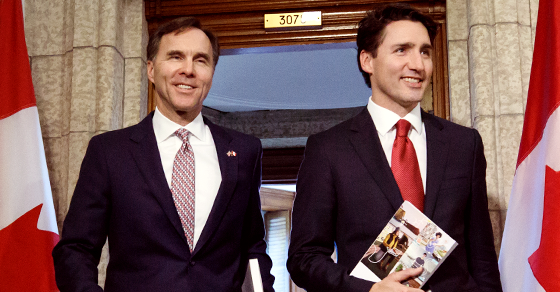 The Liberal budget will ready young Canadians for the insecure, low-paying ‘jobs of tomorrow’

Bill Morneau has a plan to create the "jobs of tomorrow" – except it's a future of low-wages and perpetual job insecurity.

Finance Minister Bill Morneau says he has a plan to create the “jobs of tomorrow.”

But while Morneau describes a future of “self-driving cars” and “artificial intelligence” and “quantum computing” and “the sharing economy,” there’s one thing he forgot to mention – it’s also a future of low-wages and perpetual job insecurity.

Both Morneau and Prime Minister Justin Trudeau have indicated they believe temporary jobs are the way of the future.

Last fall, Morneau told young workers they need to get used to the “job churn” as they “move from job to job to job.”

A week later, Trudeau was heckled by youth when he claimed “technological disruption” and “the sharing economy” are creating a “new reality” where we no longer work “one job,” but instead have “multiple careers over the course of our lives.”

So to pave the way for Morneau and Trudeau’s brave “new reality,” Budget 2017 makes investments in skills training to create a “culture of lifelong learning and skills training to help workers and their families adapt to the changing demands of our time.”

Except, while it’s true that the nature of work and the economy is changing, the data shows a lot of Canadians are not actually jumping from “job to job to job” as Morneau and Trudeau suggest.

So if that hasn’t changed, what has? According to MacEwen, the problem has more to do with employers offering workers a series of flexible, short-term contracts at low-pay instead of stable and predictable long-term employment:

“For many workers, precarity doesn’t mean jumping from job to job – it means not knowing how many hours you can count on next week, it means not having any benefits, it means balancing multiple jobs along with caretaking duties and/or furthering your own education. It means working for the same employer for 5 years, but always on six month contracts. It means unpaid internships are the only kind of internship you can find, or not having any recourse when an employer unjustifiably docks your wages or takes your tips for themselves.”

And as CLC senior researcher Emily Norgang adds, that’s part of the reason why a single-minded focus on skills training doesn’t address the real forces reshaping the economy and the labour market:

“Discussions often centre on skills development for young people, rather than ensuring that there are actually more jobs available – and that those jobs are of decent quality.”

Despite Trudeau’s rhetoric about “technological disruptions” and “the sharing economy,” a recent CIBC study warned that the quality of jobs in Canada has actually been undergoing a “slow but steady deterioration” for the last 25 years.

That’s the kind of labour market young Canadian workers are graduating into. But even among “prime-age workers” between the ages of 25 to 54, CIBC reports “the share of lower-paying jobs has been on the rise” too.

Drilling down further, a recent CLC research paper on young workers and the precarious economy last year noted Canada has seen a “drastic rise in self-employment” – and they aren’t independent-minded entrepreneurs either.

Rhetoric about “the ‘gig’ or ‘sharing’ economy” increasingly functions as a cover for companies that want greater “labour market flexibility and de-regulation,” moves CLC suggests place “downward pressures on wages and working conditions.”

And one way these “new business models” degrade the quality of Canadian jobs is through a “tendency to categorize workers as independent-contractors rather than employees,” leading to an explosion of workers miscategorized as “self-employed”:

“This drastic rise in self-employment points to concerns over what has been termed ‘false’ self-employment, whereby employers are increasingly (either inadvertently or deliberately) misclassifying workers as self-employed or independent-operators to avoid taxes and engage workers without having to respect employment standards and workers’ rights. This places workers outside of the scope of certain social and labour protections related to health and safety, working hours, minimum wages, dismissal, employment insurance and retirement security.”

While it’s never a bad thing to invest in skills and training, suggesting it’s necessary because temporary jobs are inevitable misses the point and actually perpetuates the problem.

Here are a few ideas CLC suggests would improve the quality of the jobs of tomorrow:

• Help young workers get a foot in the door: “Develop and implement a Youth Job Guarantee that ensures every young person has a good job, paid internship or quality training position within four months of leaving formal education or becoming unemployed.”

• Strengthen workplace standards: “Federal and provincial employment standards must be revised and strengthened in areas related to hours of work and overtime pay, predictable scheduling, vacation entitlements and other leaves, paid sick leave and the imposition of stricter regulations on the actions of temporary help agencies” and “expanding the scope of how employees are defined and eliminating most exclusions in federal and provincial labour law and employment standards.”