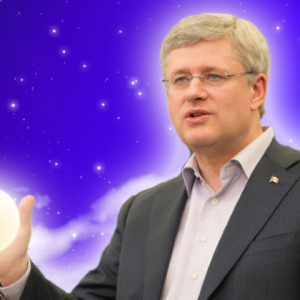 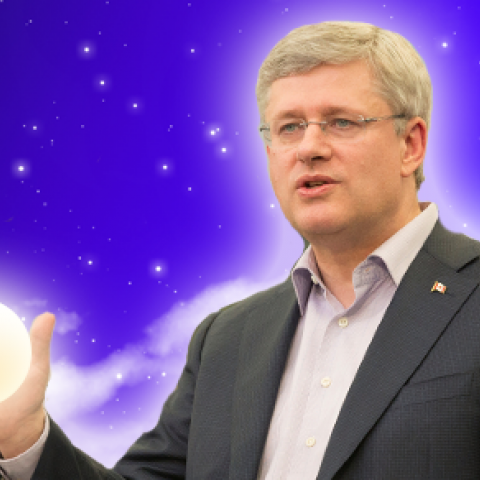 Does Stephen Harper believe in magic?

“Dropping our tax rate has not caused the government’s corporate income tax revenues to fall, which indicates that it does in fact attract business.”

Just so we’re all on the same page, Harper is saying lowering corporate taxes does not lead to less tax revenue. In fact, he claims the move has attracted new business, implying corporate tax cuts have had the opposite effect on revenues.

Since “no one seems to have questioned his statement,” Toby Sanger, an economist at the Canadian Union of Public Employees, did some number-crunching, using data from the Department of Finance and Statistics Canada.

This is what he found: In other words, lowering corporate taxes has led to the predictable outcome of lower corporate tax revenues. You know, cause and effect.

And as for Harper’s claim that Canada’s low taxes make it more competitive in attracting business? Well, Sanger points out that Harper’s musing came on the same day that Canada slipped in the rankings of the World Economic Forum’s annual world competitiveness index — our lowest ranking since 2006.

As we have seen, there’s little credibility to the claim that corporate tax cuts are doing much to stimulate the economy with excess corporate cash at record levels and little growth in investment rates or the economy,” explained Sanger.

The bigger point, Sanger explains, is the data strikes a blow against “Lafferites” like Harper and other Ronald Reagan-era “neo-conservatives who claim cuts to tax rates even at relatively low levels can pay for themselves by increasing economic activity and tax revenues.” The idea is that a tax rate of zero would generate zero revenues while on the opposite end, a 100% tax rate wouldn’t generate revenues either, so the “curve” suggests there’s a point on the bend when high tax rates lead to diminishing returns. While most economists acknowledge this relationship exists, there’s a lot of disagreement about where the curve bends.

Sanger points to a recent analysis conducted by President Obama’s former Chief Economic Advisor Austan Goolsbee. Goolsbee compared historical tax data with Laffer’s theories, and found that “as a testable hypothesis” the Laffer curve “has not fared well,” particularly the notion that “high rates fail to raise any revenue.”

“The notion that governments could raise more money by cutting rates is, indeed, a glorious idea … Unfortunately for all of us, the data from the historical record suggest that it is unlikely to be true at anything like today’s marginal tax rates. It seems that, for now at least, we will just have to keep paying for our tax cuts the old-fashioned way.”

In other words, when corporations pay less, the rest of us pay more.