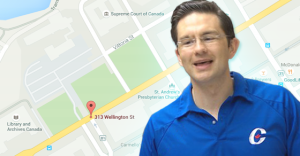 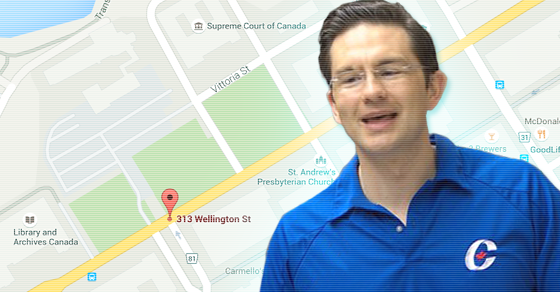 Either Google Maps is wrong or Pierre Poilievre is wrong. Both can't be right.

Either Google Maps is wrong or Pierre Poilievre is wrong.

Both can’t be right.

During an all-candidates debate in the Ottawa-area riding of Carleton last week, Stephen Harper’s employment minister suggested local opposition to the Conservatives’ controversial Victims of Communism memorial is fueled by “misinformation.”

“Some have suggested it would be going on the front lawn of the Supreme Court,” the Conservative candidate said.

“It will not be anywhere close to that. The proposal is to put it next to the parking lot for the Library and Archives on Wellington Street.”

Not only does Tribute to Liberty (the Conservative-linked group pushing the project) explicitly states the memorial will be built “on land adjacent to the Supreme Court of Canada.”

But more importantly, Google Maps tells a different story too.

The parking lot of Library and Archives Canada, on the other hand, is a little over two city blocks away. The City of Ottawa passed a motion in the spring asking the federal government to move its so-called Memorial to the Victims of Communism in May.

The memorial has been criticized by a national body representing Canadian architects, members of the project’s selection jury, the editorial boards of the Toronto Star, the Globe and Mail and the Ottawa Citizen and Ottawa-Centre incumbent Paul Dewar.

Although Poilievre claims the memorial will be “nowhere close” to the Supreme Court, it is possible the meaning of “close” could be subjective.

Here is what that same area looks like from a slightly higher altitude: While Poilievre is correct in stating that the memorial will not be built “on the front lawn of the Supreme Court,” it is not clear if any critics ever suggested that in the first place.

The National Capital Commission’s advisory committee on planning, design and realty suggested it could be “detrimental to the dignity” of Parliament Hill, located a few blocks away.

Chief Justice of the Supreme Court Beverly McLachlin, on the other hand, warned the “bleakness and brutalism” of the memorial “could send the wrong message within the judicial precinct.”

Here is what the proposed site looks like at street-level view from the front door of the Supreme Court:

And while Poilievre may be unaware of the actual location of the memorial, other cabinet ministers seem as though they could be aware.

Here is what view of the proposed site looks like from Jason Kenney’s perspective: It is not clear why Poilievre would suggest the Library and Archives Canada parking lot is the closest landmark to the new memorial.

Here’s the view of the proposed memorial site from the Library and Archives parking lot:

Library and Archives Canada’s parking lot was privatized by the Conservative government in 2011.