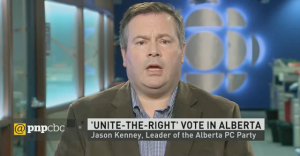 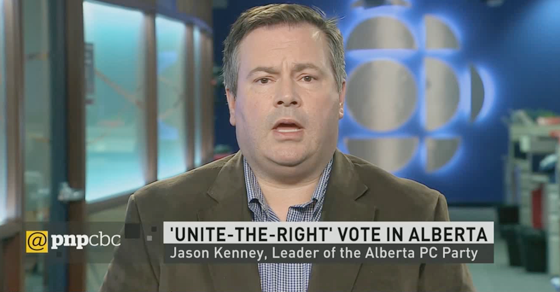 Jason Kenney realizes he's supposed to be uniting-the-right not dividing it, right?

There goes Jason Kenney again – a real uniter, not a divider!

As members of Alberta’s Wildrose and Progressive Conservative parties cast ballots on a merger plan that could reshape conservative politics in the province, the leader of Alberta’s PCs says he isn’t worried about loyal Wildrose supporters because they’re just “contrarians by nature.”

Not quite the unifying tone you’d expect from an aspiring leader of a newly merged party.

During an appearance on CBC’s Power and Politics Friday, host Terry Milewski asked Kenney how “confident” he is that he’ll manage to secure 75% of votes from Wildrose members to authorize his unity plan – a “pretty high bar to reach,” noted Milewski.

But Kenney also shrugged off suggestions Wildrose loyalists might balk at Kenney’s plan, explaining that the “nature” of the Wildrose Party itself inclines many to “vote against just about any proposition”:

“Wildrose is a populist party, so it has an element within it who are contrarians by nature and will vote against just about any proposition.”

And what will the would-be leader of the new party do to mend fences if he gets what he wants?

Asking Kenney what he makes of “doubters on both right and left,” Milewski pointed out his own PC MLAs are “nervous” Kenney plans to steer the party to the “extreme right.”

Then there’s Wildrose finance critic Derek Fildebrandt, who worries Kenney may embrace a watered down “vanilla conservatism” to keep the centre-right wing of the party from becoming too disgruntled.

“Terry, I’ve said this since day one: it’s inevitable. When you go through a process of realignment like this, that you’re going to lose a small number of people from the margins of both legacy parties. You recall 13 years ago, Joe Clark and a couple of hundred of his fellow travellers left the united Conservative Party federally, and a couple hundred Reformers left.”

Jason Kenney realizes he’s supposed to be uniting-the-right not dividing it, right?