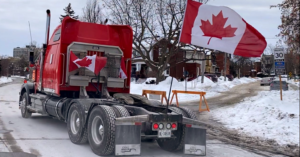 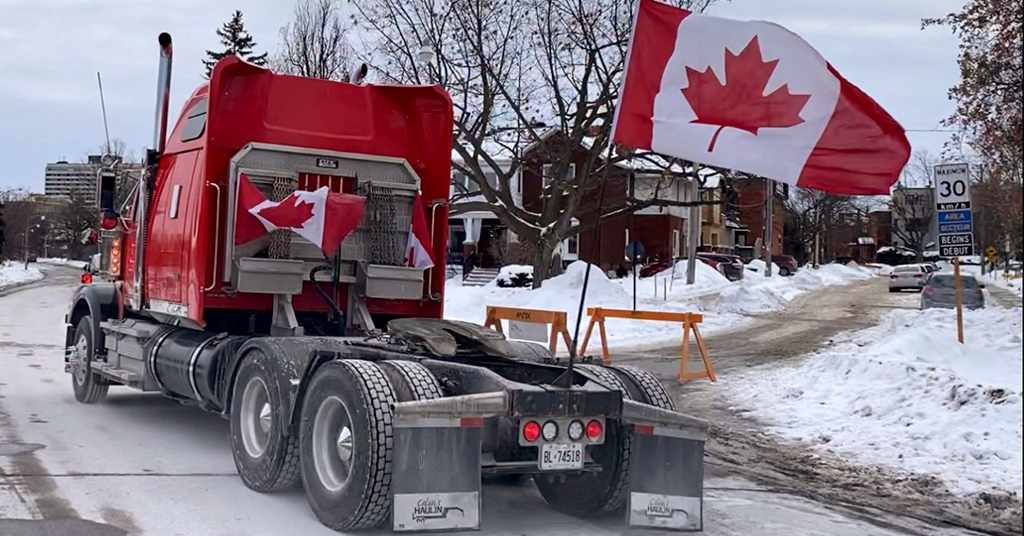 This article is more than 9 months old
NEW

City of Ottawa officials withheld details about a staging area where “Freedom Convoy” occupiers were camping out and throwing tailgate parties on Queen Elizabeth Drive – a street located next to residential homes and a local high school.

Internal emails obtained through Access to Information by PressProgress show Ottawa Police informed city officials that they had “designated” the street as a “parking area” for convoy vehicles a day after the illegal occupation began.

Despite this, city officials did not communicate that information to the public. They even withheld details about the staging area from a statement to a journalist asking why convoy occupiers were sleeping in trucks next to residential homes.

On the first weekend of the convoy occupation, approximately 30 to 40 vehicles were seen at various times camping out on a stretch of Queen Elizabeth Drive between Confederation Park and the Queensway.

Neither @OttawaCity nor @OttawaPolice have given any explanation why they’re letting trucks camp out on Queen Elizabeth Drive.

Just did a walk through – I count 34 vehicles. Many spent the night here. Several are currently idling with no one inside.

Convoy occupiers threw tailgate parties with barbecues, sped up and down the street past joggers, dog walkers and elderly pedestrians, and littered the sides of the road with garbage, brown paper LCBO bags and human waste.

One pick-up truck was parked beside a local high school loaded with gas cans.

As of 12:30 AM, there are a dozen idling trucks camping out along Queen Elizabeth Drive next to homes.

They’re quite loud and the air is heavy with the smell of diesel.

The City still has not explained why they’re letting them camp out here.

One of Ottawa’s unique quirks is that vast swaths of land in and around the city are owned by the National Capital Commission, a federal crown corporation responsible for preserving the symbolic heritage of Canada’s national capital and stewarding the region’s natural beauty.

Queen Elizabeth Drive is a scenic parkway that runs along the west side of the Rideau Canal,  a UNESCO World Heritage site, which is owned by the NCC and falls under federal jurisdiction. The street is lined by rows of houses, rental apartment buildings and embassies and is normally policed by the RCMP. 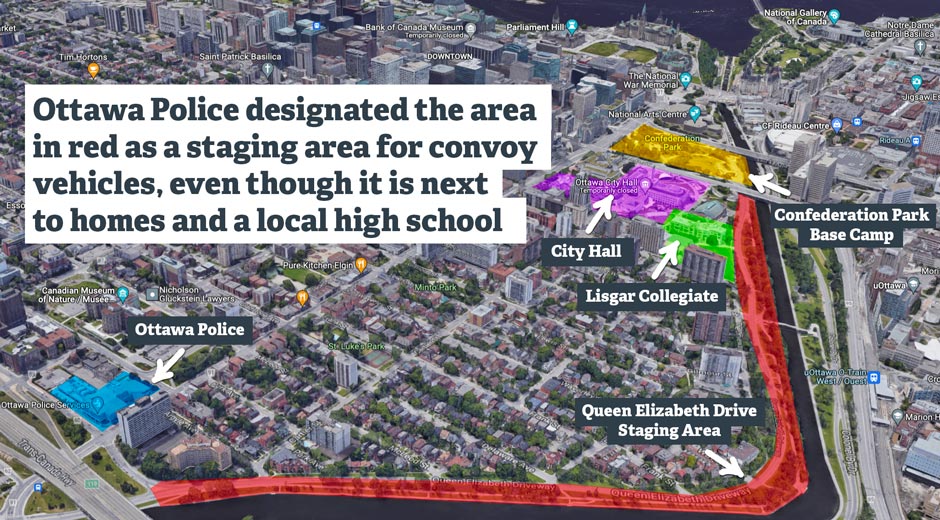 However, in advance of the Freedom Convoy’s arrival in Ottawa, the NCC handed responsibility for “managing traffic operations” on the roadway that weekend to the City of Ottawa and Ottawa Police.

“Ottawa Police Service was the law enforcement and traffic management lead for the duration of the Convoy’s presence in Ottawa,” the NCC told PressProgress.

One worker with ARX Fencing and Logistics, a private firm contracted by the NCC to manage road closures, told PressProgress on January 29 that the convoy occupiers had been given the entire “section of the road” north of Catherine Street and that Ottawa Police had told them convoy vehicles were “going to be here all night.”

Vehicles at the north end of Queen Elizabeth Drive later established a base camp on NCC land at Confederation Park, where convoy occupiers built wooden structures and stockpiled a cache of gasoline and propane on site. 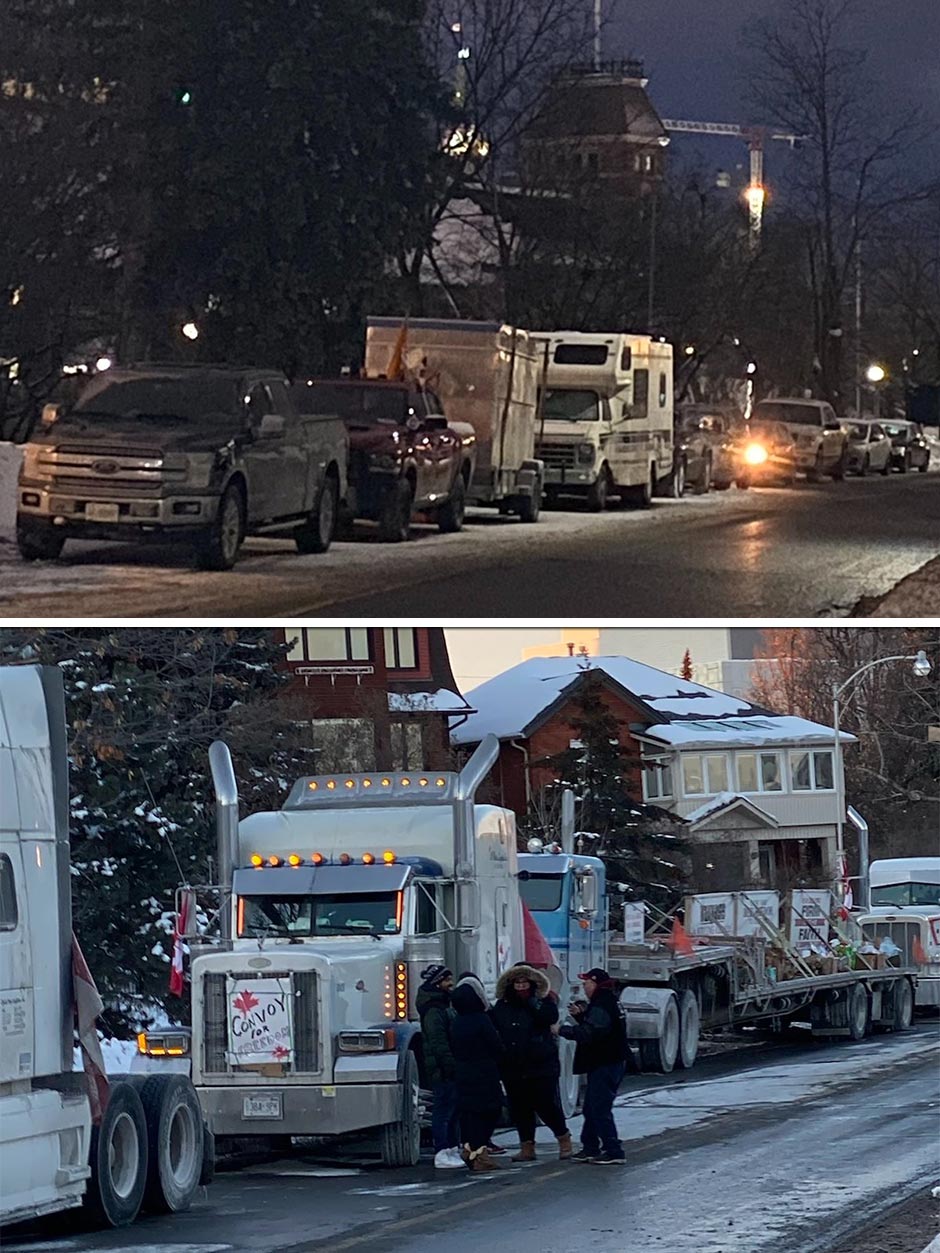 Despite obvious security concerns, neither Ottawa Police nor the City of Ottawa alerted the public or residents near Queen Elizabeth Drive that police had invited convoy vehicles to spend the night in their neighbourhood.

The only communication from the City of Ottawa mentioning the street was a general notice on January 28 about potential “traffic impacts” downtown.

In fact, internal emails from City Hall make clear that neither Ottawa Police nor the City of Ottawa had any real awareness of what was happening on the ground as convoy occupiers treated the street like an RV campground.

One truck camping out on Queen Elizabeth Drive is set-up with a barbecue and lawn chair, another is distributing bags of food.

Another truck is parked on a residential street around the corner with a porta potty on the back of their trailer. pic.twitter.com/fCWlOIZZER

Emails responding to a January 29 media request from PressProgress suggest city officials were unaware convoy vehicles were using the roadway as a staging area and contacted Ottawa Police to verify the information.

“The reporter understands that trucks are parked along Queen Elizabeth Drive and sleeping in their cars,” a city staffer told Ottawa Police on Saturday, January 29.

“He notes there is concern with the proximity of residential areas while they are holding tailgate parties and BBQs and would like to know why the City is allowing protesters to do so along the QED. Could you please confirm if that’s the case?”

“That is a designated parking area for demonstrators,” an Ottawa Police Service spokesperson informed the City of Ottawa in an email sent three minutes later.

“What they do in their cars/trucks – not sure we are monitoring.” 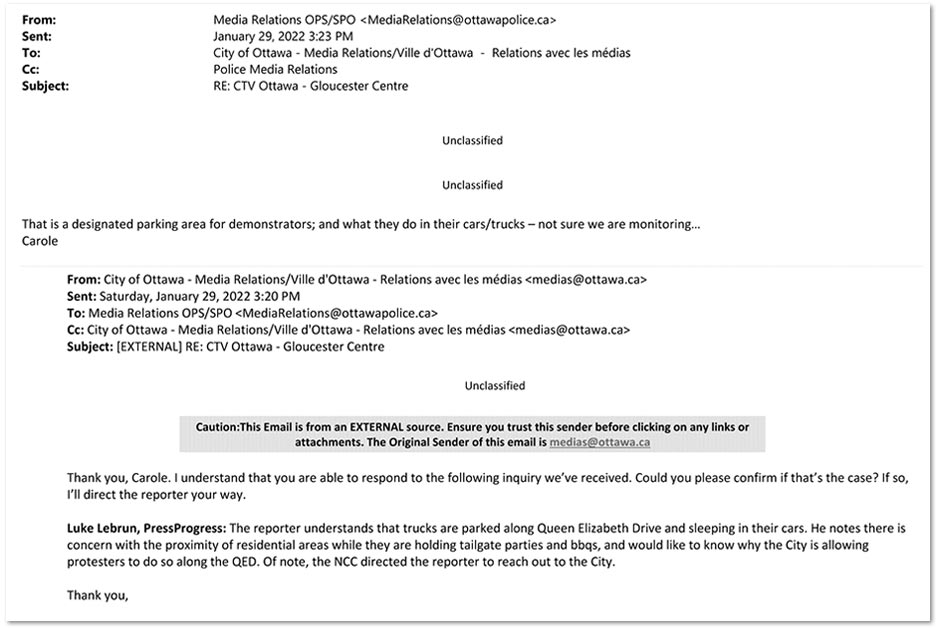 Kim Ayotte, Ottawa’s General Manager of Emergency and Protective Services, issued a statement to PressProgress on January 30 indicating that convoy vehicles had “created significant gridlock within the City’s downtown core” and noted Ottawa Police were “working to mitigate a range of resident concerns.”

Ayotte made no mention of the fact the City had actually learned Ottawa Police designated the street as a staging area while they were preparing his statement.

The City of Ottawa’s vague statement prompted PressProgress to follow-up with detailed questions asking why the City was letting convoy occupiers sleep in vehicles next to residential homes and whether any consideration had been given to noise and air pollution. The emails show city officials and Ottawa Police both agreed they would stop responding to PressProgress.

“OPS has informed us that they will not be responding, and we will also not respond to the follow-up to the statement below,” media relations manager Kina LeClair advised Andrea Lanthier-Seymour, Ottawa’s director of public information. 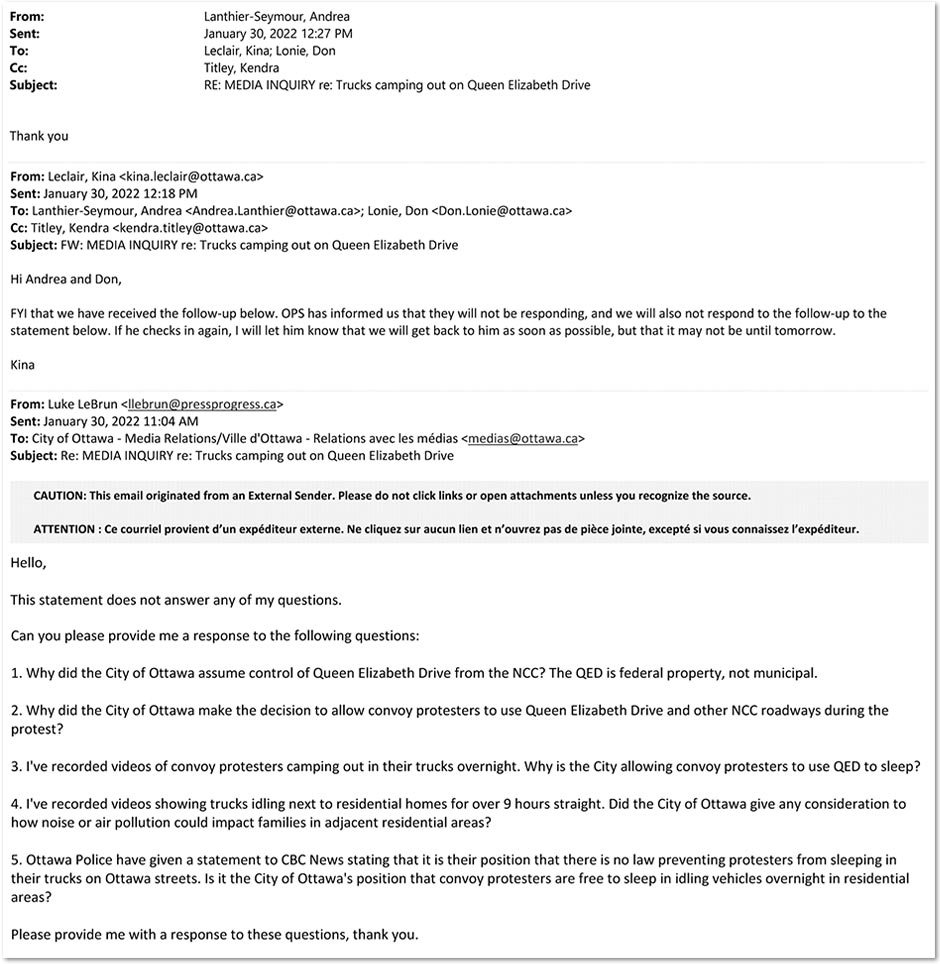 The City of Ottawa said it is not able to answer any questions about the emails disclosed through Access to Information due to an ongoing “internal review.”

“City staff are currently defining the scope of an internal review of the City’s response to the downtown demonstration, as well as working with partners to determine the City’s contributions to various other evaluations,” Ayotte said in a second statement to PressProgress.

“As such, the City is unable to disclose further information at this time.”

The City of Ottawa was also unable to shed light on what it knew about an incident at Lisgar Collegiate, which is located along Queen Elizabeth Drive next to City Hall, after a pick-up truck full of gas canisters was spotted camping out next to the high school on the morning of February 4.

A vice-principal at Lisgar confirmed to PressProgress that students were in-class at the time. They indicated school officials were unaware — as well as concerned to learn — that a truck loaded with gas cans was parked a few metres outside classroom windows. 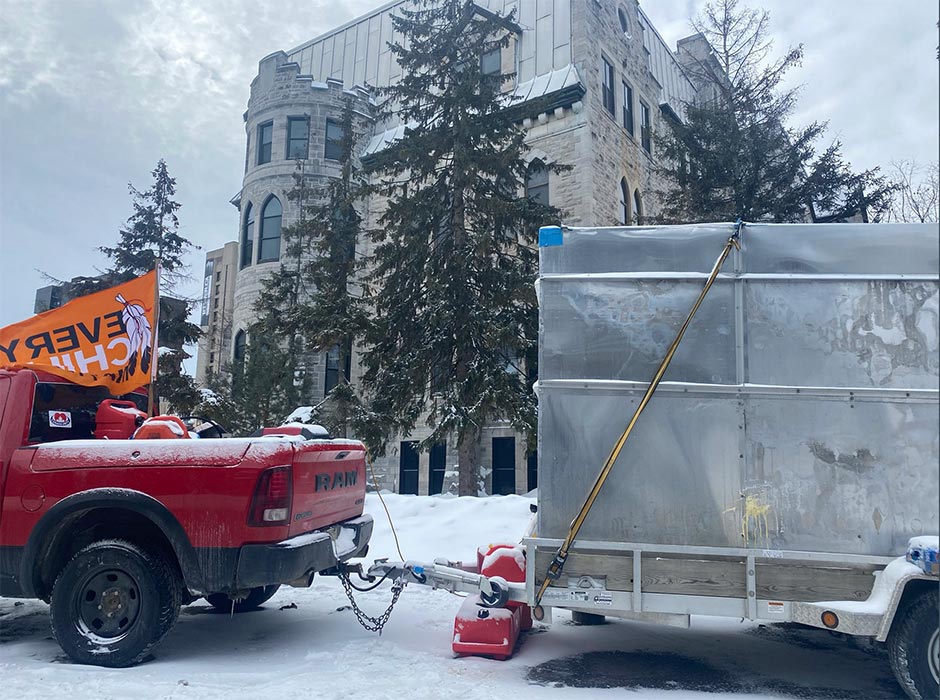 It remains unclear why Ottawa Police would designate a street next to homes and a local high school as a staging area for convoy vehicles in the first place.

Emails between convoy leaders and police obtained by PressProgress last month show Ottawa Police did not mention Queen Elizabeth Drive in staging area maps distributed to organizers on the evening of January 27 — the night before the Freedom Convoy’s chaotic first weekend.

Queen Elizabeth Drive was also not listed in other January 27 emails from Ottawa Police to convoy leaders disclosed in court documents, which were first reported by CBC News on April 2 and independently verified by PressProgress.

In response to questions about the decision to use a street next to residential homes and a local high school as a staging area, an Ottawa Police Service spokesperson told PressProgress that Ottawa Police have decided they will not be providing any further information to the public.

“The Ottawa Police will not weigh further in on this matter.”