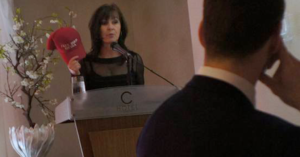 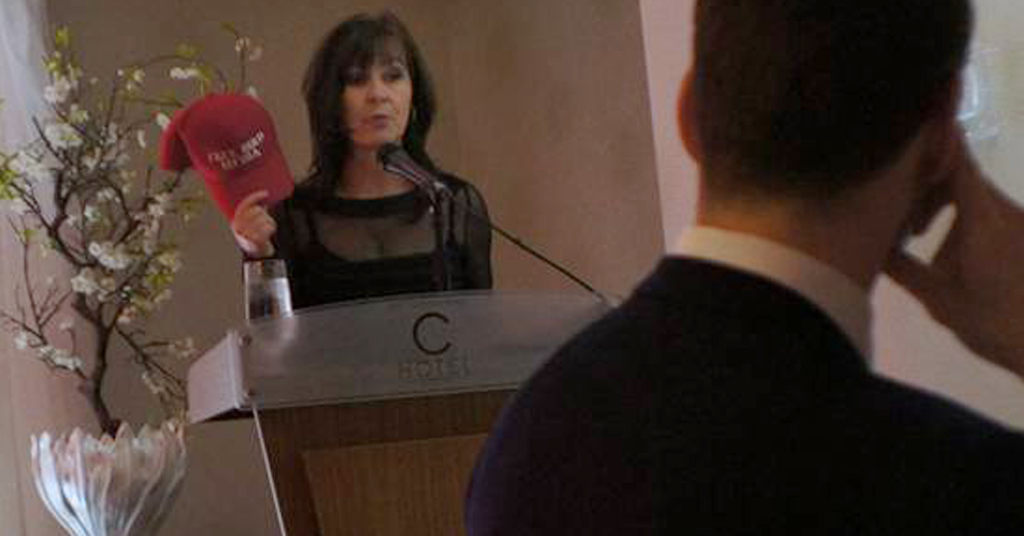 An Ontario PC candidate promoted a controversial alt-right website that has a well-documented history amplifying some of Canada’s most toxic and racist personalities during an event for young conservatives in Hamilton last Christmas.

Except ‘Free Bird Media’ is an alt-right website whose video archives are filled with hours of speeches and interviews featuring prominent figures on Canada’s far-right, including two men recently charged with hate crimes.

The photo from the event, uploaded to Facebook by Cosmin Dzsurdzsa, the alt-right website’s “creative director,” is accompanied by a message that reads:

“Thanks to Donna Skelly – Ward 7 Councillor for the shout out!” Skelly’s campaign did not respond to a request for comment from PressProgress.

On Monday, Doug Ford showcased Skelly as a potential cabinet minister if the Ontario PCs form government after the province’s June 7 election.

FBM purports to be a platform that promotes “freedom of speech,” yet the website that received a special “shout out” from the sitting Hamilton city councillor and current Ontario PC candidate is filled with speeches and interviews from some of the most radical and extreme figures on Canada’s far-right.

Paul Fromm: Described by the National Post as “one of Canada’s most notorious white supremacists,” with extensive links to neo-Nazi groups.

James Sears: Editor of the racist, far-right publication ‘Your Ward News’ who was recently charged with hate crimes – according to CBC News, Sears published material that “portrayed Jews as dogs” and “glorified Hitler.”

Kevin Johnston: Anti-Muslim blogger who was charged with a hate crime after offering $1,000 rewards for videos of Muslim school children. During an interview on CBC News in January, CBC News’ Wendy Mesley questioned controversial professor Jordan Peterson about a photo featuring himself and FBM founder Alex Van Hamme with a flag featuring Pepe the Frog – a cartoon frog used as a coded symbol by the alt-right and other online hate groups.

Van Hamme, a guest speaker alongside Skelly at the Conservative Christmas event, and Peterson were also photographed with a white nationalist who was identified as a member of a group caught plastering racist flyers on the University of Toronto’s campus. The Ontario PC candidate also had a front-row seat at the Hamilton Conservative Christmas Formal as Van Hamme delivered a spirited monologue on the “testicles” of “biological male professors” at universities.

Van Hamme informed Skelly and an audience of young conservatives that academia is a “feminine environment” that leaves men “castrated.”

Dzsurdzsa, the FBM director who uploaded the photo of Skelly, also openly touts his experience serving as deputy editor of the US-based Russia Insider website.

According to news outlets ranging from BBC News to Newsweek, Russia Insider is a “Pro-Kremlin propaganda” site with a track record of promoting anti-Semitism.

Russia Insider’s archives show the FBM director published articles calling on Canada to drop sanctions and establish a “healthy trade partnership with Russia” and insinuated Bill C-51 may have been “purposefully” designed to make it a “criminal offence” to express “vocal support for Russia.”

Update: Following publication of this story, Donna Skelly told CBC News she was unaware of what FBM was before publicly endorsing the alt-right website at an event for conservative youth.

“I had no idea what Free Bird Media was, and that’s the honest truth,” Skelly told CBC News. “I honestly know nothing about this website. I stopped in to this event for 20 minutes and I was gone.”

Skelly added that she does not “condone or endorse” speech that is “hurtful, harmful or illegal.”

According to Van Hamme, not only did Skelly “know exactly who I am and what I’m about” when she attended the event, she also “stood on stage and declared ‘we need more media like this!’ while holding (FBM’s) hat.”