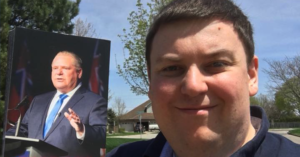 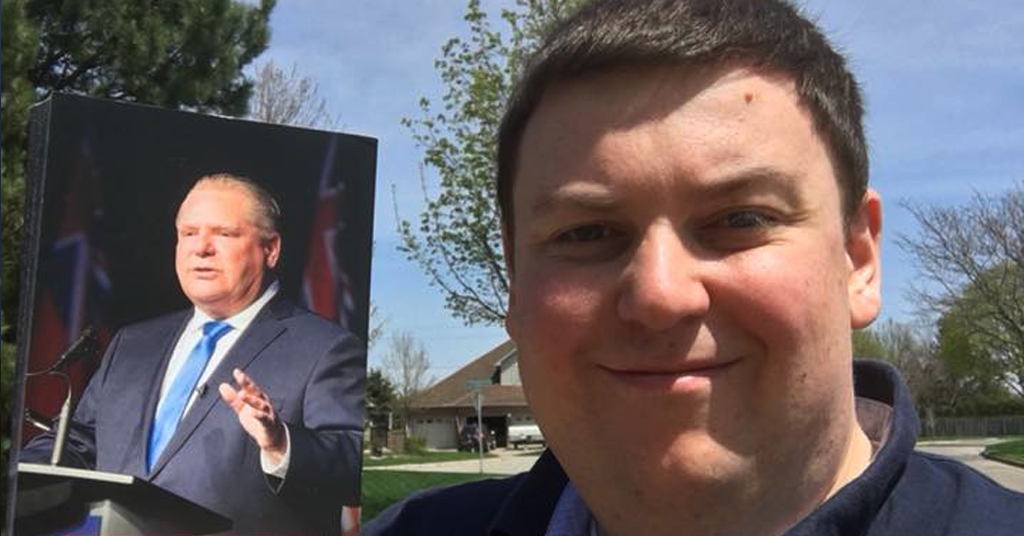 Before he was personally appointed by Ford to run as the Ontario PC candidate in the riding of London West last month over the objections of local grassroot party members, Andrew Lawton was a right-wing radio host with a podcast on Ezra Levant’s controversial alt-right Rebel Media website.

During a March 2016 episode of the Ontario PC candidate’s Rebel Media podcast, Lawton weighed in on the question of free speech on campus.

Following a monologue accusing universities of “censoring” anti-abortion groups and recalling the time he organized a university speaking tour for US far-right author Ann Coulter, Lawton said he believes every single question imaginable should be open for debate – including Holocaust denial.

“When these debates happen they are so much fun to watch,” Lawton said. “You see the power of debate and disagreement.”

To underline his all-or-nothing thoughts on free speech, the Rebel Media podcaster turned Ontario PC candidate offered an analogy suggesting even Jewish groups on university campuses should never shut down debates on “offensive” questions like: “did the Holocaust actually happen?”

“I would darn well hope that no group in that situation would ever say (Holocaust deniers) don’t have that right to make that appeal,” the Ontario PC candidate said.

“This isn’t to say that we should be hosting debates about ‘oh, did the Holocaust actually happen?’ on campuses. But at the same time, if someone wanted to and I were a Jewish group on campus, would I say this is offensive? To say that the Holocaust never happened is offensive? Absolutely, I’d say that. But I would darn well hope that no group in that situation would ever say they don’t have that right to make that appeal.”

Doug Ford has stated the former Rebel Media podcaster is a “good candidate” and that he is “happy to have Andrew on as one of the candidates” despite a lengthy list of past comments that Ford admitted “weren’t appropriate.”

Lawton previously attributed his past conduct to “struggles with mental illness” between the years 2005 and 2013.

The Ontario PC candidate’s hot take on free speech and Holocaust denial appeared on the March 16, 2016 episode of his Rebel Media podcast, a website that showcased personalities who publicly questioned the Holocaust and has been disavowed by sitting Conservative MPs for promoting “white supremacy” and “anti-Semitism.”

Lawton’s campaign has been dogged by his well-documented history with hardline right-wing politics since Ford appointed him as a candidate last month:

• On a March 2016 episode of his Rebel Media podcast, Lawton argued racial and gender discrimination should be legal in Canadian workplaces.

• On a January 2016 episode of his Rebel Media podcast, Lawton stated that German women “deserve” to be raped as a consequence of Germany’s refugee policies.

• On a February 2016 episode of his Rebel Media podcast, Lawton told alt-right YouTuber Faith Goldy that moves to extend equality to women can be described as the “pussification” of Western society.

• In 2015, Lawton was suspended by London’s AM980 after posting that gay men who spread HIV/AIDS are “the real enemy,” not those who are “intolerant of the LGBTQ community,” pointing to stats on “sexual-orientation motivated hate crimes.”

• In 2010, the Toronto Sun credited Lawton with leading an initiative to “start a Tea Party movement in Canada” modelled after right-wing groups in the United States.

• In a 2009 blog post, Lawton called the National Day of Remembrance and Action on Violence Against Women – a day commemorating the massacre of 14 women at Montréal’s École Polytechnique in 1989 – a “fake holiday” and a “faux-day of remembrance” invented by “feminazis.”