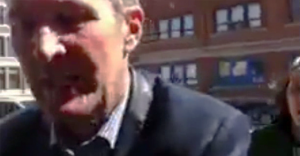 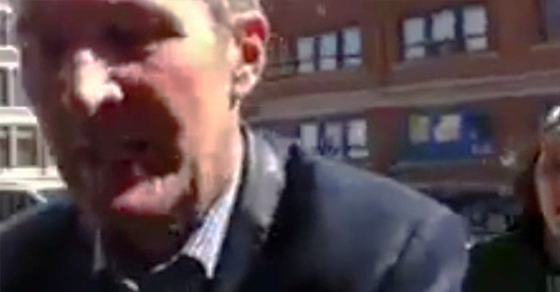 What on earth is going on here?

A video shot Monday afternoon appears to show Manitoba PC leader Brian Pallister in an altercation with a young protester, allegedly grabbing the youth’s phone right out of his hands.

The video shows a young man attempting to ask Pallister a question as the Tory leader enters a Winnipeg campaign event with his entourage when suddenly the camera spins wildly.

During the commotion, the frantic voice of someone identified as a member of Pallister’s staff is heard pleading:

Riley McMurray, who shot the video, told PressProgress that he was attempting to ask Pallister a question about his position on climate change when the Tory leader physically grabbed the phone out of his hands.

He says one of Pallister’s staffers retrieved the phone during the altercation and “very subtly handed it back to me.”

“Pallister, while he was taking the phone out of my hands, was saying that he supports my democratic rights,” McMurray added.

He says he reported the incident to Winnipeg police Tuesday morning.

McMurray is connected to the Manitoba Energy Justice Coalition, a non-partisan environmental group that has been showing up to Pallister’s campaign events in an attempt to press the Tory leader about his stance on climate change.

McMurray is not affiliated with any political party. He says his main focus is on issues relating to climate change and participatory democracy.

He explained that he was at the event to ask Pallister why the Tories “still hadn’t responded to the MEJC climate survey” despite “all other major parties” in Manitoba having submitted responses to the group on an issue that has “dire importance at this point in history.”