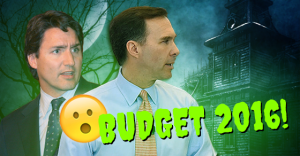 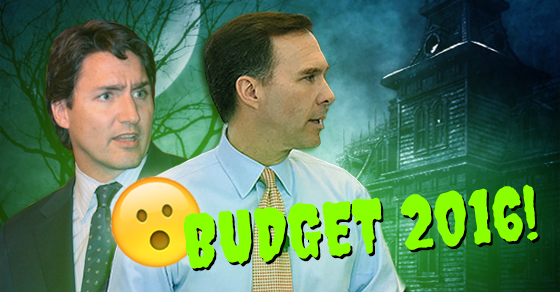 No, Conservatives: the Liberals did not announce a “nightmare” tax & spend budget from the 1970s

If you listen to interim Conservative leader Rona Ambrose, she'll tell you it's a "nightmare scenario."

Is the 2016 budget really a “nightmare” tax and spend budget?

If you listen to interim Conservative leader Rona Ambrose, she’ll tell you the “spending spree” is a “nightmare scenario.”

And the right-wing Canadian Taxpayers Federation says if you had to pick a name for the budget, it should be named “Spendy McDebtface,” for some reason.

This framing of the budget has even managed to creep into media coverage, with CBC declaring “Liberals push deficit to spend big” and Postmedia suggesting it’s an “activist” budget.

While it’s true the Liberal government is projecting deficits, scratching below the surface shows right-wing exaggerations about over-spending and “big government” don’t hold much water.

Here are a few things to think about:

1. The Liberals (and the Conservatives) are exaggerating how bad the deficit really is

Conservative MP Jason Kenney is worried the “deficit will be a disaster for Canada’s future.”

Don’t worry, Jason: if past Liberal budgets are anything to go by, things are being made to look terrible now so they’ll look like geniuses in a few years when they exceed expectations.

Economist Jim Stanford has noted former Finance Minister Paul Martin was notorious for under-promising and over-delivering: by deliberately painting a “bleak picture of Ottawa’s finances,” this allowed Martin to pat himself on the back for his “overperformance” later on: Sure enough, the 2016 budget paints a pretty bleak picture.

As the Globe and Mail’s David Parkinson points out, the budget ignores sunnier private sector forecasts for the coming years, predicting growth will be $40 billion less than is widely expected – conveniently leaving the Liberal government with a $6 billion cushion each year:

The budget even spells out just how bleak an economic outlook this contingency measure implies: It would be equivalent to assuming an average oil price of just $25 (U.S.) a barrel, rather than the $40 projected in the government’s February survey of private-sector economists, and real GDP growth of just 1 per cent this year, instead of the survey’s 1.4 per cent.

In other words, by exaggerating how bad the deficit is, Jason Kenney could actually be helping the Liberals efforts at “managing (or manipulating) public expectations.”

2. The projected deficit is not that big, historically speaking

Another thing that will put Kenney’s mind at ease is that the current deficit is not as big as the ones his own government racked up.

Unifor economist Jordan Brennan notes the deficits projected by the 2016 budget are pretty modest compared to deficits Canada has run in the past.

Even at its deepest dip, the Liberal deficit does not exceed the one run by the Harper Conservatives in 2011-2012, and that’s nothing compared to the Trudeau and Mulroney deficits back in the 1970s and 80s. 3. This is not the return of “big government”

“Welcome back to the age of big government in Canada,” announced Macleans’ business editor Jason Kirby.

Meanwhile, the National Post’s Andrew Coyne bemoaned how a “burst of spending” not seen since the 1972 was guided by the Liberal government’s “abiding faith in the centrality of government.”

Despite what these pundits say, in reality, the Harper Conservatives left Canada’s federal government smaller than at any time since the Second World War: According to Finance Canada, the Harper government left program spending at 12.9% of GDP – the last time federal spending was that low, Canada had no national health care plan, no pension plan, no employment insurance and so on.

The 2016 budget proposes to increase spending only as high as 14.6% of GDP – so, no, the size of Canada’s federal government does not appear to be returning to 1970 levels.

What’s more, the increased spending is only temporary and the budget actually projects program spending will return back to a Harper-era low of 13.6% of GDP by the end of the decade.

4. By the way, the Liberals broke billions in campaign promises

Although headlines suggest the deficit is partially thanks to the Liberals sticking with their campaign’s spending plan, that isn’t quite what happened:

And that’s not all:

• The Liberals budgeted $3 billion less for social infrastructure, including affordable housing and child care, with some of that money not kicking in for two years.

• The budget broke a $3 billion campaign promise to invest “immediately” in home care.

• Despite promising veterans they’d replace controversial lump-sum payments brought in by Harper’s Conservatives and “re-establish lifelong pensions … during the 2015-2016 fiscal year,” the Liberal budget backed away from this pledge.

• While the budget pledged a much needed $2.6 billion over five years for First Nations Education, much of the promised spending is back-ended and “won’t appear unless the Trudeau government achieves re-election” in 2019.

5. Canada has a revenue problem, not a spending problem

It’s hard to argue Canada wouldn’t find itself racking up deficits today if it hadn’t been for decades of tax giveaways, mainly benefiting corporations and the wealthy.

One good thing the budget did was cancel several Harper-era boutique tax cuts, measures that sound nice but often weren’t a “meaningful amount” for ordinary Canadians, while many of the benefits went to wealthy families.

On the other hand, Finance Minister Bill Morneau flip-flopped on closing the stock options tax loophole, something the Liberal platform said is used primarily by “8,000 very high-income Canadians.” That change would have raised an additional $2 billion by 2018-19.

And although it’s labeled a “middle class tax cut,” the Liberals’ changes to income tax rates leaves Canada’s wealthiest 10% with half of all the benefits while those earning less than $45,000 see nothing. The tax cut will cost the government $100 million in lost revenue each year.

What else? Liberal and Conservative corporate tax cuts have not created jobs or stimulated business investment, but they have cost the government tens of billions in lost revenues – restoring the 2006 corporate tax rate would make the deficit $18 billion smaller by 2018-19.

Now that’s something to think about.