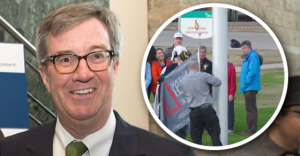 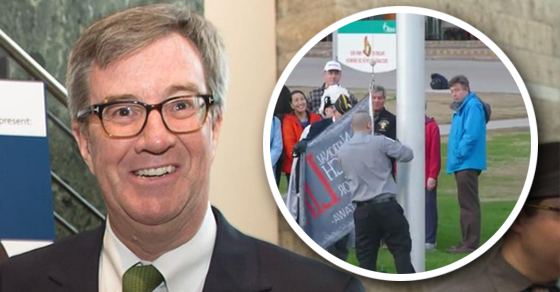 Ottawa Mayor Jim Watson struggled to explain how it was allowed to happen.

Ottawa Mayor Jim Watson is struggling to defend a decision to raise the flag of a group that wants to restrict women’s reproductive rights and declare Tuesday, May 11th “Respect for Life Day” in the City of Ottawa.

Before many in the national capital region had yet woken up, a small group of anti-abortion activists gathered at Ottawa City Hall at 5:45 am Tuesday morning to raise a flag marking the National March for Life, an annual event organized by Campaign Life Coalition, a right-wing social conservative group known for extreme rhetoric on abortion and the “gay agenda.”

Anti-abortion activists celebrated the flag raising as a historic event, noting that “for the first time in Canada’s history, the nation’s capital this morning raised a pro-life flag over its City Hall.” Following the flag raising, several city councillors signed a joint statement calling for the removal of the flag, expressing outrage that a “flag representing a personal conviction to restrict a woman’s right to safe and legal abortion is flying on the grounds of City Hall for the first time in the City’s history.”

They also pointed out the flag raising violates the City’s existing policies:

“Safe access to abortion is a fundamental and constitutionally-protected right enjoyed by all women in Canada. All citizens of our country are welcome to demonstrate and express their view against that right.

However, the City of Ottawa’s policy on proclamation which led to the flag-raising is clear: ‘a proclamation will not be issued for matters that … represent individual conviction’.”

Following the release of the statement, Watson tweeted that the City would “review” its policies on proclamations and flag raising:

I have asked the City’s Clerk’s Office for a completed review of the Proclamations and Flag raising policy.

The flag initially remained raised over City Hall until the mayor finally acknowledged a growing backlash on Twitter.

I am pleased to report that the anti abortion flag has been taken down. I have asked staff for a complete review of the city’s flag policy

Despite Watson’s claims that he shares “concerns” about the policy, he’s issued similar proclamations recognizing “the rights” of “the unborn” for the last several years in a row – in 2011, Watson blamed it on an “old policy” too.

And despite Watson’s suggestion that “City staff” were responsible for the mistake, anti-abortion activist Francis Barrett told the right-wing website LifeSiteNews.com his group received “formal permission” to raise the flag after directly corresponding with both the Mayor and City staff:

“So, I sent an e-mail to the Mayor and he replied the very next day and he said: ‘we’ll take it under consideration.’ Now, there’s a lot of ifs and buts and whatnot went in between, but here it is – we did get it up there. And I’m so proud, I’m so proud of the Mayor and the staff that they went along with this … I only got the formal permission last Monday. It was nip and tuck all the way.”

Here’s a snapshot of how people reacted to Ottawa’s anti-abortion flag Tuesday:

The flag at #Ottawa City Hall must come down immediately. Our joint statement on the pro-life flag at #ottcity Hall: pic.twitter.com/ma8Vbg7MqK

I could not be more disgusted and ashamed of my city than I am right now. Not only proclaiming today’s festival of misogyny, but a flag?

Today our mayor @JimWatsonOttawa flew a pro-life flag at #Ottawa city hall. This is so wrong. Choice is essential to women’s rights.

I want answers from @ottawacity as to how it was even vaguely considered OK to fly the anti-abortion flag! Abortion is LEGAL, its is….1/2

If you’re as angry as I am about this flag issue in Ottawa, why not throw some money at @KnowPPO ?

I guess that’s the concern with Jim Watson, if you go to every ribbon cutting and raise every flag are you just a robot w/out principles?