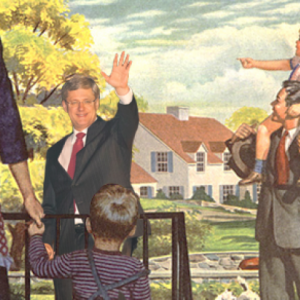 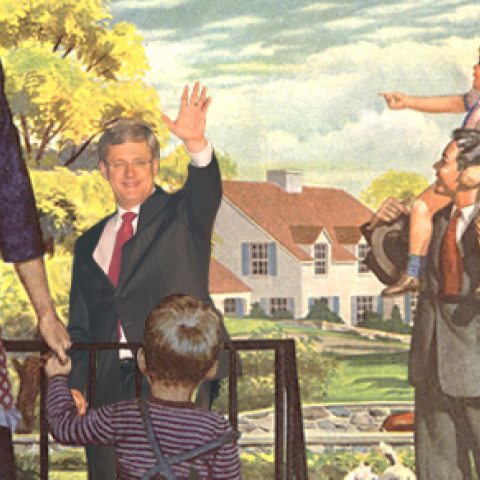 Leave it to Harper: 5 Conservative policies better suited for families in the 1950s

Prime Minister Stephen Harper is always selling himself as the family guy. As Family Day is celebrated in three provinces, we put his record to the test. It turns out, he’s right. Harper’s policies might be a fit for families — and society in general — in the 1950s. Ah, the bygone era of the stay-at-home […]

Prime Minister Stephen Harper is always selling himself as the family guy.

As Family Day is celebrated in three provinces, we put his record to the test.

It turns out, he’s right. Harper’s policies might be a fit for families — and society in general — in the 1950s.

Ah, the bygone era of the stay-at-home moms, Cold War paranoia — and healthy general ingnorance towards environmental issues. Here are 5 reasons why this Conservative government was born too late: The Harper government opposes national child care on the grounds that it’s “a crazy scheme to raise your kids for you.” The prime minister himself has warned against the creation of a “child-care bureaucracy.”

Perfectly rational thinking — if it were the 1950s.

Today, 63% of mothers with children under six — and a working spouse — participate in the workforce.

The Conservatives enhancements to the Universal Child Care Benefit, providing $720 more per year for families with children age 6-17, only accounts for a fraction of daycare costs.

While data varies per city and province, the average monthly daycare (outside of Quebec’s publically-funded system) falls somewhere between $800 (Saskatoon) to $1,676 (Toronto).

Privately run child care facilities are also growing at a greater pace than non-profit, regulated spaces. Based on 2012 data, there were over 1.9 million children under five years old with working parents in Canada — but just over half a million regulated child care spaces.

Child care costs account for between 25% and 35% of the average women’s income. (So a shiny toonie a day just isn’t going to cut it.)

The Conservative income-splitting plan — or ‘Family Tax Cut‘ — certainly seems to belong in the Leave it to Beaver era.

A recent study from the Canadian Centre for Policy Alternatives examined the rise of women in the workforce and concluded the Conservatives’ tax-relief plan is probably more helpful to Canadian families of a bygone era.

The ‘Family Tax Cut’ allows parents with kids under the age of 18 with different incomes to shift up to $50,000 from a parent in a higher tax bracket to a parent in a lower income bracket (with a $2,000 cap).

Experts argue it is “a tax policy that will encourage one parent, most likely the mother, to stay home and raise their children.” (The actual target of the income splitting scheme are parents with children under 18, and yet 54.1% of these target families will get $0, in many cases because both parents are in the same tax bracket.)

So you have to be a certain kind of Canadian household to qualify for this benefit:

And even among the families that do qualify for income splitting — many of which are Canada’s wealthiest and least in need of financial help — the benefits are pretty underwhelming.

The Harper’s government’s so-called tough-on-crime agenda has seen incarcaration rates increase by 17.5 per cent since 2005 — even though overall crime rates have been steadily falling for 20 years (which Statistics Canada largely credits to changing demographics — i.e. an aging population).

The big reason more people are behind bars? Canada is now 2nd in the world (behind the U.S.) in terms of the number of offences that attract minimum sentences.

This includes a minimum sentence for marijuana trafficking or possession for the purpose of trafficking, introduced in Bill C-10. Similar mandatory minimum pot sentences have been deemed “a costly failure” in the U.S.

The Globe reports the price tag to operate the federal corrections system has almost doubled between 2006 to 2012 –  from $1.6-billion to just under $3-billion. The average cost of putting a Canadian behind bars for a year is $113,000.

Not surprisingly, the 1950s and ’60s were also a time of increased mandatory minimums — which legal and policy experts agree “do not have a deterrent or educative effect.” (Maybe Finance Minister Joe Oliver should add a line to fund a time machine in his spring budget?)

For the Harper government, the 1950s would have been a blissful era where the words “climate change,” along with mountains of pesky climate change data, didn’t hang over their heads. No need to to spend nine years paying lip service to issues like industy regulations to reduce greenhouse gas emissions! And none of those embarassing international climate- change summits for the PM to avoid!

Public concern over pollution and the effects of human activity on the environment didn’t really gain wide traction in Canada until the 1960s.

The ’50s would have been the perfect time for a government that has stuck its head in the sand on everything from climate change to regulating industry, and walked away from commitments to scientific research and the protection of endangered species.

I spy with my little eye

The Tories new anti-terror legislation sounds like it would have also fit right in during the 1950s.

Canada’s domestic hunt for communists in the early ’50s saw the RCMP spy on many groups suspected of having communist leanings or progressive opinions. Security checks on civil servants, scientists, university professors and trade unionists were common.

(That ’50s-era targeting may already sound oddly familiar to some of today’s environmental and activist groups opposed to pipelines.)

A Maclean’s magazine columnist in the ’50s described the paranoid vibe of the era: “If a housewife in Ottawa hears a knock on her door, it can be one of only two people. The milkman or the RCMP.”

Critics main concern with the new Tory legislation is that its provisions could be used to infringe the rights of lawful individuals and organizations. Ontario’s former privacy commissioner Ann Cavoukian likened the new anti-terror powers to a “massive fishing expedition.”

As Ed Broadbent and Roy Romanow put it in their recent Globe and Mail column:

“The bill attacks the civil rights of all Canadians, and places the protections guaranteed by the Charter of Rights and Freedoms under the shadow of wider powers to interfere with lawful and legitimate conduct.”