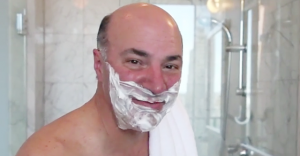 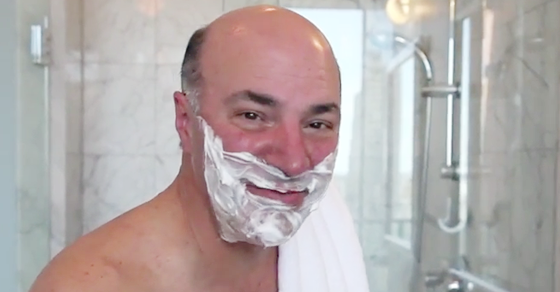 Kevin O’Leary’s little secret: I never wear pants on TV because the CBC is ‘run by women’

"The thing about the CBC, I gotta tell you guys, is the whole place is run by women. I'm working for women ... It's ridiculous."

That might pose a problem for someone aspiring to be Prime Minister, considering O’Leary’s seeking a job where over 50% of his potential bosses would be women.

But according to a 2011 video filmed in front of O’Leary’s bathroom mirror, the current front runner in the race to replace Stephen Harper as Conservative leader expresses his frustration about working at a job where “the whole place is run by women” – the Canadian Broadcasting Corporation.

O’Leary even confides a little secret to the camera about how he likes to get revenge.

During interviews with CBC News Network conducted by Skype, O’Leary says he doesn’t wear pants – “I never do. I’m not kidding”:

“The thing about the CBC, I gotta tell you guys, is the whole place is run by women. I’m working for women. I’m a token guy there. Think about it: Heather Hiscox, Amanda Lang, Kirstine Stewart, Julie Bristow – all these are women that I work for. It’s ridiculous.

So you know how I get back at them? Today when I do that hit by Skype, I won’t have any pants on. I never do. I’m not kidding.”

One person who has is O’Leary’s Dragon’s Den co-star Arlene Dickinson, noting recently in Maclean’s:

“Denigrating women has become something of a trend for Kevin.”

O’Leary butted heads with Dickinson shortly after joining the Conservative leadership race in January, suggesting criticism from his female co-star shouldn’t be taken seriously because she’s a “very emotional” woman.

The celebrity millionaire has also been known to advise young entrepreneurs to dump their girlfriends if they complain about work-life balance because you can have “many girlfriends” when they’re wealthy – not exactly endearing himself to conservative family values voters.

Then over the weekend, O’Leary shrugged off questions from reporters after video from a 2013 Dragon’s Den episode resurfaced during the Manning Centre Conference in Ottawa.

The resurfaced video shows O’Leary ogling a model and requesting to touch her buttocks:

UPDATE: O’Leary’s campaign responded to this story Wednesday, dismissing his statements about “working for women” as both a joke and as “slander,” adding that it is “glaringly obvious that PressProgress, a notoriously anti-conservative blog, has no sense of humour.”

They also noted O’Leary has long considered himself a “feminist”:

@kevinolearytv :team re: video: ‘It is glaringly obvious Press Progress, a notoriously anti-conservative blog, has no senses of humour.’

‘It is truly a shame Press Progress wants to distract from the great work and strides women in business have made….

….and choose instead to twist facts to slander a person like Kevin O’Leary who has said repeatedly he is a feminist. ‘

Meanwhile, responding to the same PressProgress story, Conservative leadership candidate Lisa Raitt took the opportunity to remind O’Leary that “trousers are mandatory” in the House of Commons:

I hope he’s seen the front bench of our Opposition in the House of Commons. Fortunately – we have a dress code and trousers are mandatory. https://t.co/B06kfVG5lk