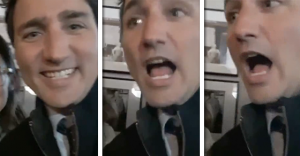 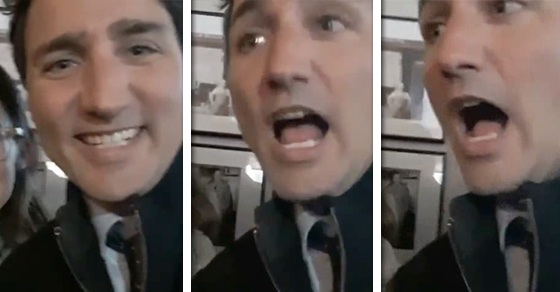 Justin Trudeau was questioned on Indigenous rights in the middle of a selfie. This was his reaction.

Prime Minister Trudeau was questioned on whether he plans to implement UNDRIP while taking a selfie. Here's how the photo turned out.

Well, that was unexpected.

At an event in Halifax this week, Prime Minister Justin Trudeau fielded a substantive question on public policy when he least expected it – in the middle of a selfie.

Asked by two 19-year-old Dalhousie University students if he’d pose for a quick selfie, the Prime Minister was happy to oblige.

But what happened next will surprise you. “Are you planning on implementing UNDRIP?,” asked one of the two students, who are both involved in a campus environmental group.

“Uh, absolutely, yes,” Trudeau replies, quickly shuffling away. “For sure.”

The United Nations Declaration on the Rights of Indigenous Peoples (UNDRIP) is a landmark document recognizing Indigenous peoples’ rights to self-determination, language, equality and land.

Disappearing into a crowd, Trudeau adds that he “absolutely” agrees with the need to consult Indigenous communities on natural resources projects, stating that “we need to engage with a broad range of voices,” but also says “indigenous communities have positions on just about both sides of every different project.”

Loved seeing our PM .@JustinTrudeau in Halifax for a selfie! pic.twitter.com/bjv7tWrKpz

But if Trudeau “for sure” agrees, how come his response was so awkward?

Under Stephen Harper’s Conservative government, Canada was the only member of the United Nations to reject UNDRIP, calling the document “aspirational” but not legally binding.

Trudeau’s Liberals appeared to reverse the Harper Conservatives’ position in May 2016.

Speaking at the UN’s headquarters in New York, Indigenous Affairs Minister Carolyn Bennett announced Canada was “now a full supporter of the declaration, without qualification,” and pledged “nothing less than to adopt and implement the declaration in accordance with the Canadian Constitution.”

But two months later, Justice Minister Judy Wilson-Raybould appeared to reverse that reversal, calling UNDRIP “unworkable” and stating it would not be adopted directly into Canadian law.

It remains unclear how Trudeau’s statement Monday in Halifax that he’ll “for sure” implement UNDRIP squares with his own Justice Minister’s assessment last summer that UNDRIP is “unworkable.”

The final report of the Truth and Reconciliation Commission calls on Canada’s federal government “fully adopt and implement” UNDRIP as a key recommendation.

When the TRC’s final report was published in 2015, Trudeau’s office issued a statement promising:

“We will, in partnership with Indigenous communities, the provinces, territories, and other vital partners, fully implement the Calls to Action of the Truth and Reconciliation Commission, starting with the implementation of the United Nations Declaration on the Rights of Indigenous Peoples.”