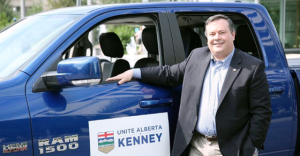 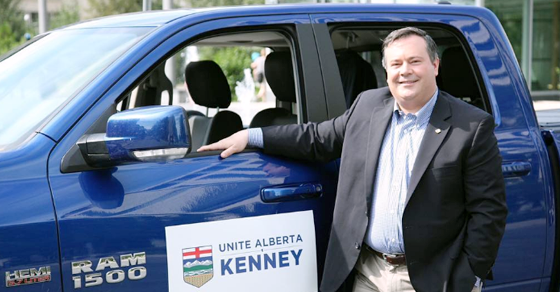 "The Ram 1500 is assembled in both Michigan and Mexico," a Fiat Chrysler spokesperson told PressProgress.

Under the impression Jason Kenney is a ‘buy Canadian’ kinda guy?

Given the outrage directed at Earls Restaurants, you can be forgiven for thinking the leadership contender for Alberta’s Progressive Conservatives was actually, you know, consistent about supporting things that are “locally sourced” and employ “thousands of Canadians”:

So, if Kenney launched a gimmicky Alberta road trip, you would think he’d be consistent and drive a locally sourced vehicle that “employs thousands of Canadians” too, right?

During a press conference Monday, Kenney told reporters he was heading out on what he calls a “unity truck tour” of Alberta.

.@jkenney Behind the wheel of a Ram truck ready for his “Truck Tour” of Alberta. pic.twitter.com/DSfyX35yxo

Kenney announced that he would visit communities big and small across the province, to “listen” to their concerns about the domestic economy and explain what he would do to put an end to “policies that are driving away business and investment.”

And then Kenney turned around, climbed into a Ram 1500 and drove away from the press conference in a pick-up truck that is manufactured at assembly plants in Saltillo, Mexico and Warren, Michigan.

“The Ram 1500 is assembled in both Michigan and Mexico,” a Fiat Chrysler spokesperson told PressProgress, adding the truck is no longer called a “Dodge” Ram – since 2009, it’s just a Ram.

Launched our #UnityTruckTour in #Edmonton today. Will be travelling in my Dodge Ram pickup to… https://t.co/l1l9QvjQgm

To be sure, Kenney – who has gone out of his way telling other people to buy Canadian products that “employs thousands of Canadians” – had quite a number of vehicles built by Canadian workers available to choose from.

Maybe a Dodge Charger? A GMC Terrain? A Ford Flex? Or heck – imagine Jason Kenney driving around Alberta in an eight-year-old Honda Civic!

Then again, surrounding a beat-up Honda Civic with a dozen flags doesn’t quite project the same image as Kenney powering a Ram 1500 through the Rockies in a two-piece suit – image is everything, after all!

On second thought, maybe driving an imported truck is actually a perfect metaphor for Kenney’s inconsistent talk about jobs and investments.

For someone who wants to talk about “policies that are driving away business and investment,” the policies Kenney is promoting did a pretty good job driving the auto industry into the ground when the Harper Conservatives were in power:

While the Harper Conservatives were in power, a government agency even gave the German car maker Volkswagen half-a-billion dollars to help build an assembly plant in Mexico. Canada’s auto trade deficit with Mexico grew to $10 billion.

And hardly a week ago, Kenney criticized the Alberta government for taking steps to ensure local workers and businesses got first crack at contracts from municipalities in Alberta – he actually suggested it was unfair to companies from Ontario and Quebec:

He might want to talk this over with Fort McMurray’s Wildrose MLA Tany Yao, who supports the very thing Kenney condemned as a “major obstacle” to prosperity.

When a contractor subcontracted Ontario clean-up crews following the Fort McMurray fire, Yao argued only local firms should be getting preference on contracts to rebuild Fort McMurray, explaining “many people in Fort McMurray are looking for work” and it’s “a time of great need.”

If you’re scratching your head, you might not be the only one having trouble following Kenney’s train of thought:

@aguycalled80 My policies would favour the economic union called Canada, and in so doing favour Alberta consumers and taxpayers.

Didnt his boss want to build a firewall around alberta? https://t.co/RxjV97NZDd

And Kenney says he opposes policies that drive away business but supports liberal trade policies that actually did drive auto sector jobs out of Canada. Plus he would also make it easier for companies in Ontario and Quebec to take business away from those struggling in Fort McMurray.

Oh, and for added incoherence: Kenney was very happy with the Brexit outcome too.

All things considered, maybe this whirlwind tour is a good idea – it seems like Kenney’s already all over the map!