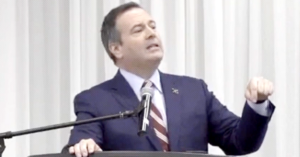 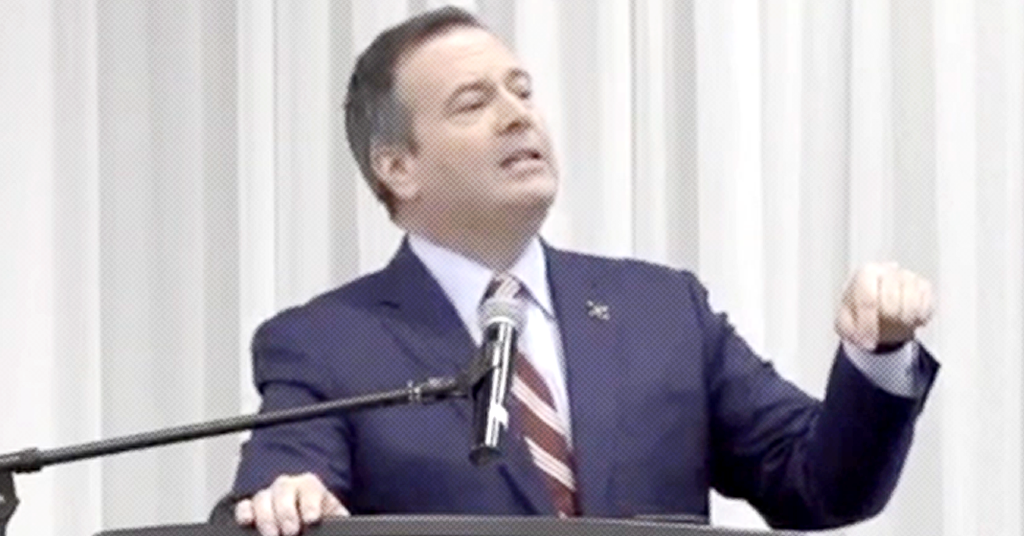 “They figure they could push us around, that we were the weakest kid in the school yard,” Kenney told the oil executives. “You know what happens in the school yard? The bully normally picks on the kid who doesn’t push back.”

Kenney was promoting controversial plans to create a $30 million “war room” and launch a public inquiry targeting environmental groups, when he cited examples of autocratic regimes known to jail or murder their critics in an apparent attempt to explain why Alberta needs to get tougher with environmentalists.

The Premier shared one anecdote, claiming Putin sends environmentalists to prison camps in Siberia and are never seen again — Kenney suggested he wouldn’t advocate doing that in Canada, but underlined his belief that Putin’s approach to dealing with environmentalists is very “instructive”:

“They know they couldn’t get away with this in Vladimir Putin’s Russia. In fact, Greenpeace did do a protest on an offshore rig in Russia and their crew was arrested and thrown in a Siberian jail for six months and funnily enough they’ve never been back — I’m not recommending that for Canada, but it’s instructive. It’s instructive … They have seen Canada’s wonderfully generous, hospitable, sometimes apologetic Canadian temperament as an invitation for aggression. But folks, that is why it is so important we send a message that Alberta and Canada is now standing up and fighting back.”

While critics of the Kremlin regularly end up jailed or assassinated in Putin’s Russia, Kenney’s anecdote is nonetheless wildly inaccurate.

It is true that in 2013, the Russian coast guard arrested the crew of the Arctic Sunrise after the Greenpeace vessel tried to board an offshore oil rig owned by Gazprom.

But Kenney claimed the Greenpeace crew was sent to Siberia and never seen again. In reality, they were jailed in Saint Petersburg and released a few months later.

The Russian government later lost a lawsuit and paid out €2.7 million in damages for illegally boarding the ship and arresting its crew, forcing Russia to acknowledge that the environmentalists did have a right to protest all along.

The Netherlands and Russia have reached a settlement in the @Greenpeace Arctic Sunrise case. Both countries acknowledge the right to protest at sea. This underlines that ships in international waters cannot be boarded and persons on board cannot be arrested without cause. pic.twitter.com/7sE9z8jha4

In an open letter Tuesday, Amnesty International Canada warned Kenney that his anti-environmentalist initiatives are undermining constitutional rights, free speech and encouraging hostilities that could lead to threats of violence.