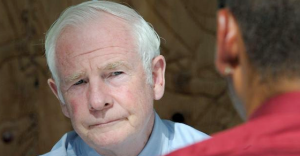 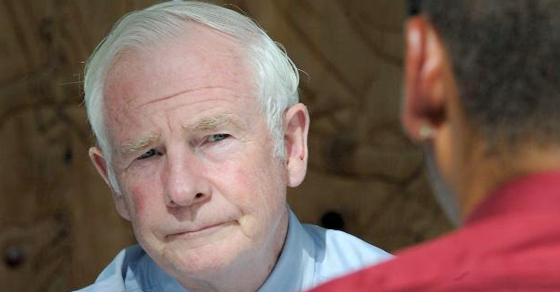 Canada's Governor General is kicking off "Canada 150" by dedicating the first gaffe of the national sesquicentennial to "our quote, Indigenous people, unquote."

Canada’s Governor General is kicking off “Canada 150” celebrations by dedicating the first gaffe of the national sesquicentennial to “our quote, Indigenous people, unquote.”

“Quote, Indigenous people, unquote” is not something you want to hear from Canada’s Governor General: pic.twitter.com/6xIbGysku1

The discourse of Indigenous peoples as immigrants and/or “ours” is engineered to serve the very same purpose: legitimize Canada. https://t.co/hqFLMUdT8b

Speaking to CBC Radio’s The House over the weekend, Governor General David Johnston attempted to explain what he thinks unifies Canadians by pointing out we are all “immigrants” – including “our quote, Indigenous people, unquote”:

“We’re a country based on immigration, going right back to our, quote, Indigenous people, unquote, who were immigrants as well, 10, 12, 14,000 years ago.”

While some questioned Johnston’s understanding of history (recent data suggests migration to North America may have occurred as much as 10,000 years earlier, though even his own timeline places this wave of “immigration” in the middle of the Stone Age) and others took issue with Johnston repeatedly implying possession over “our” Indigenous people, it’s also a pretty big deal that the Governor General is the representative of the Crown.

That’s significant because First Nations signed treaties with the Crown, not the Government of Canada.

“Most Canadians don’t realize that for Indigenous Peoples, Canada’s place in its Treaty relationships is not fulfilled by the government of the day, but rather by the Crown—specifically the Queen … what people need to realize is that the relationship between the Sovereign and Indigenous Peoples is at the heart of any Treaty. The Queen, on behalf of Canadians, is bound in Treaties across the land, cementing familial relationships with First Nations … If Canada is truly committed to reconciling a nation-to-nation relationship, then the Crown that allowed this country to germinate in these lands needs to be understood and embraced so we can restore ourselves as Treaty people.”

And one of the key building blocks of that relationship includes the recognition that Indigenous people had “prior standing as fully independent, sovereign entities.”

In other words, it doesn’t matter if anybody arrived “10, 12, 14,000 years ago,” the Crown already recognized independent, sovereign nations were already using and occupying the land before Europeans arrived.

As the 1992 Royal Commission on Aboriginal Affairs put it:

“Aboriginal peoples were the first inhabitants of this continent and the original custodians of its lands and resources. As a result of long-standing use and occupation, they have continuing rights in the land. They also hold the status of self-governing nations by virtue of their prior standing as fully independent, sovereign entities. This sovereignty was manifested originally in the international relations that Aboriginal nations maintained with one another. After contact, it was also recognized in practice by incoming European powers, as they competed among themselves to establish favourable alliances and trading relations with Aboriginal peoples. The sovereignty of Aboriginal nations did not come to an end when colonial governments were established.”

So, if the Governor General redefines Indigenous people as “immigrants,” that’s distorting the original meaning of the nation-to-nation relationship set out in law.

Johnston isn’t the only Canadian who might be missing that context.

For example, the National Post’s John Ivision recently used the incident to complain about “grievance culture” and “mob outrage,” suggesting the Governor General “used the culturally loaded term “immigrant’, instead of the more neutral term ‘migrant’.”

Actually, no – the Governor General’s words do matter.