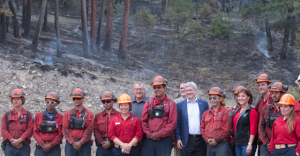 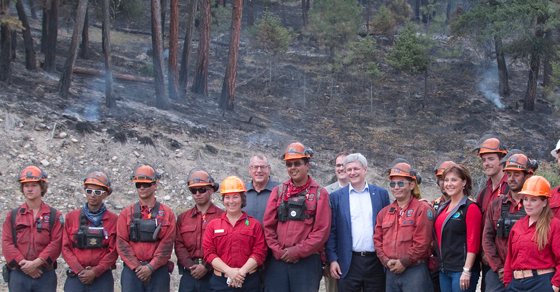 Is it ethical to use firefighters as props while a forest burns in the background?

460 hectares of forest were burning uncontained and a hill was smouldering in the background.

Is it ethical to use firefighters as props in a political photo op, particularly at the same time as 460 hectares of forest are burning uncontained and a hill smoulders in the background?

Thanks to the many workers & volunteers who are tirelessly fighting fires & ensuring the safety of their communities. pic.twitter.com/gPGNkUlMvS

Seventy West Kelowna homes had been evacuated at the time (residents have since been allowed to return home) and, as the Canadian Press described, there was “smoke billowing from a hillside behind” Harper, dressed in a blue sports coat, as he addressed the media.

But according to Adam Proskiw, a reporter for Kamloops’ InfotelNews, the photo op may not have been the most helpful thing to do during an emergency:

“For a second straight day, firefighting efforts at the Westside Road fire were the backdrop for political photo ops.

Oh, my bad, the ClarkHarper photo op is right next to a smouldering hill side. pic.twitter.com/MYGAYubbg1

“After more than an hour wait, the press conference was over after less than five minutes. The Prime Minister would not take questions about why he was there, how much time the photo opportunity took from firefighters or what resources were used in the photo effort.”

“Provinces fund their own firefighting,” Proskiew noted. “It’s not a federal responsibility.”

In Kelowna, BC today with @christyclarkbc to survey first-hand the damage caused by the recent wildfires. pic.twitter.com/wHgPVtoXSA