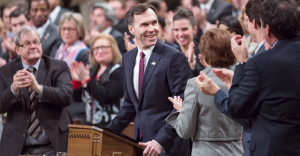 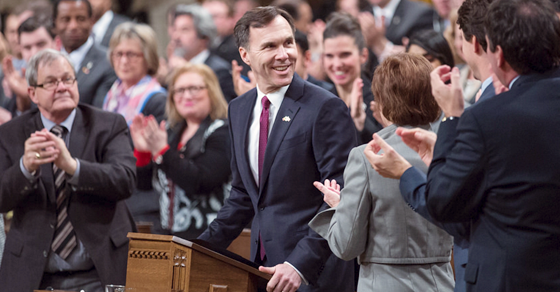 Internal report: most Canadians think the economy is ‘sluggish, stagnant and weak’

Canadians are feeling pretty pessimistic about the economy.

Canadians are feeling pretty pessimistic about the economy.

According to newly released public opinion research on Canada’s economy prepared by Environics Research for Finance Canada earlier this year, many Canadians feel like the economy is just barely puttering along with little sense of direction.

Asked to “circle words” that “best described the current state of the Canadian economy,” focus group participants from all backgrounds and regions circled words like “fragile,” “decline,” “sluggish,” “stagnant” and “weak.”

As the report notes:

“When asked to describe the current state of the Canadian economy, there was a general feeling that the economy would continue to struggle and that things would get worse before they got better, with a good contingent in each group feeling that Canada could in fact be in a recession within the next year or so.”

According to a polling data included in the report, nearly half of Canadians (48%) say they expect to see “no change” in the direction of Canada’s economy over the next six months.

The good news for Justin Trudeau’s Liberal government is many Canadians continue to blame the current state of the economy on the previous Conservative government’s policies.

Respondents across the country – including regions where many jobs are tied to natural resources – complained that “in recent years, the federal government had over-emphasized the oil industry and that we were now paying the price for what they have come to judge as a short-term vision of the economy.”

But the bad news for the Trudeau Liberals is many Canadians have no clue what they plan to do to fix Stephen Harper’s mistakes – respondents said they’re “not yet aware of the federal government plan to address Canada’s economic difficulties.”

And despite the Trudeau’s talk about the “middle-class,” lower and middle-income respondents describe their top economic concern as the “growing gap between the rich and the poor,” underlined by low wages and rising costs of living.

• Participants in Toronto pointed to “the high cost of living,” including “the price of housing, insurance, or everyday commodities” as well as “a growing gap between rich and poor and particular challenges around employment such as no jobs for young people and undermployment.”

• On the Pacific coast, Vancouver participants also shared a “growing concern among Vancouver participants of growing disparity between high income and low income households.” In addition to concerns about “a serious issue with poverty,” high costs of living “more regular, educated and fully employed people living paycheque to paycheque.”

• Meanwhile those in Calgary were “clearly sensing” the impact low oil prices have had on the province’s economy. However, while “some said it was still not as bad as the early 80s,” participants expressed “frustration” that “the region keeps reliving the same oil-based booms and busts and that diversification has not taken root or that more refineries have not been built.”

• “The same general sentiment of sluggishness and fragility regarding the economy,” was felt by participants in Montreal, although they were particularly concerned about the quality of “infrastructure” and “basic social services.”

• Quebec City participants also described the economy as “fragile and sluggish,” noting that “recent and imminent cuts in the provincial civil service” along with Quebec’s struggling real estate, construction and aerospace industries were leaving them “lukewarm about the current and short-term economic prospects for their region.”

• Participants in Moncton expressed “high levels of concern with the economy” and suggested “major restructuring” and “aggressive” change was needed. They noted “job prospects for youth are bleak, leading many to leave the region.” But many particpants expressed concern about a “lack of local economic diversity,” pointing out “the local economy was over-reliant on natural resources and that bold moves need to be taken.”

• Things in London, Ontario are looking up, though. With a lower Canadian dollar, local participants say unemployment is down and “local employers are actively looking for employees.” They also point to the regions “high tech firms” as a reason why “their diverse economy has allowed them to weather recent economic storms.” However, they also note that more needs to “be done to attract and grow manufacturing in the area.”