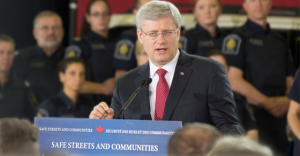 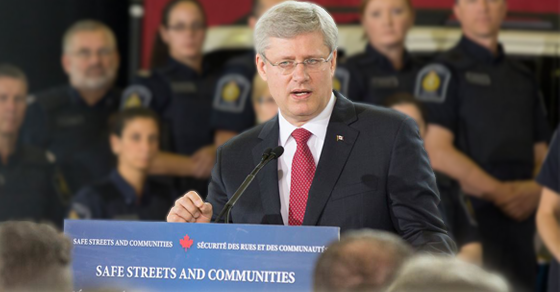 Dean Del Mastro isn't the only one of Stephen Harper's friends who now find themselves in trouble with the law.

So, ex-Conservative MP Dean Del Mastro is headed to jail.

A Peterborough judge sentenced the Prime Minister’s former Parliamentary Secretary to one month in jail and four months of house arrest after being convicted of charges relating to election law violations and submitting falsified documents to the court.

Although Del Mastro is the only sitting parliamentarian to be sentenced to jail, by no means is he the first person affiliated with Stephen Harper’s government to be on the wrong side of their law-and-order agenda.

Here’s a look at some of the other allegations (and convictions) of fraud, bribery, breach of trust and even assault: Wipe that grin off your face, wise guy.

This former Harper advisor was hired in 2006. Convicted of fraud twice in the 1980s and 1990s, Carson allegedly tried to use his connections to take advantage of impoverished First Nations communities, leading the RCMP to slap him with influence peddling charges. He was charged again in 2014 for illegal lobbying on behalf Canada School of Energy and Environment and the Energy Policy Institute of Canada. Harper appointed Porter to the Security Intelligence Review Committee in 2008.

Porter resigned in 2011 after the National Post revealed he was allegedly wetting his beak in shady business dealings with an Israeli arms dealer and the government of Sierra Leone. After he flew the coop to Panama, Porter was arrested by Interpol in 2014 on charges that he received $22.5 million in kickbacks from engineering firm SNC-Lavalin after awarding them a massive construction contract while CEO of McGill University Health Centre in Montreal. Patrick Brazeau AKA “The Brazman”

Who does this guy think he is? A senator of Canada?

A Harper appointee to the Senate in 2008, Brazeau was flagged in 2013 for improper expense claims relating to his residency status in Quebec totaling $51,482. He was charged with assault and sexual assault a week after expenses report goes public. Then charged in 2014 by RCMP for breach of trust and fraud relating to expense claims. Then charged again for a April 2014 incident with assault, cocaine possession, uttering threats, and breach of bail conditions. And he was charged yet again in October 2014 for intoxicated driving and breach of bail conditions for carrying a knife.

“The Brazman,” an alias he used to use on Twitter, is currently standing trial on the first set of charges. Pamela “Who Wants To Be A Millionaire?” Wallin

Wallin used to host the Canadian edition of Who Wants To Be a Millionaire?

But if the RCMP’s allegations of fraud and breach of trust prove true, the answer to that question might just be Pamela Wallin.

Wallin, whom Harper appointed as a senator in 2008, is currently suspended from the Senate.

And by the way: if the names “Dagenais,” “Housakos,” and “Carignan” ring a bell, that’s because they’re losers — they are all failed candidates for the House of Commons. You may have also heard about Housakos and Carignan when their names came up at the Charbonneau Commission in Quebec, which probed corruption in the construction industry. What do they have in common? Harper appointed both of them after years of loyal work as Conservative Party fundraisers and organizers.

They were charged in 2011 under the Canada Elections Act for their role in the In and Out scandal in the 2006 election, in which the Conservative Party transferred funds to candidates to buy advertisements so that the party could stay under election spending limits. Charges were dropped after the party struck a plea bargain with Elections Canada that saw the party pay back more than $230,000 on Gerstein and Finley’s behalf.  The party paid $52,000 in fines. Appointed to the Senate by Harper in 2008, Duffy was named as one of four senators improperly claiming living expenses in 2013. Duffy ended up repaying $90,000 in living expenses after receiving a cheque for that amount from Nigel Wright, the Prime Minister’s then-chief of staff. Charged under the Canada Elections Act in 2013 for sending out misleading automated phone calls to voters in Guelph, Ont., during the 2011 election, Sona maintained he did not act alone in the “Robocalls” scheme. He was convicted in 2014 and sentenced to nine months in jail.

Sona’s currently appealing his sentence — and there might be something to that too. Ontario Superior Court Judge Gary Hearn said Sona “was party to the offence,” and that “the evidence indicates [Sona] did not likely act alone.” Penashue tapped Bowers to be his campaign manager in the 2011 campaign. He ended up winning and was appointed to the Harper cabinet. Bowers was charged in 2015 under the Elections Canada for failing to return ineligible campaign contributions and for misleading the chief electoral officer in submitted documents.

As for Penashue? He resigned his seat.

Photos: University of Calgary, mikeduffy.ca, rburnett, mastermaq, files from the PMO and Parliament of Canada.