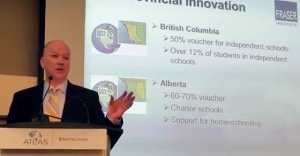 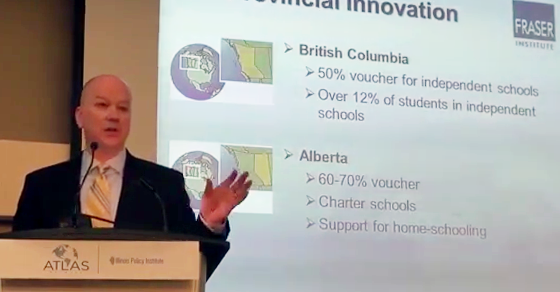 How objective are the Fraser Institute's annual school rankings?

How objective are the Fraser Institute’s annual school rankings?

The Fraser Institute’s Director of School Performance Studies claims the rankings are “the only objective, reliable tool” parents have to judge the performance of their children’s schools.

But teachers say the rankings are “flawed” and work to undermine both “confidence in public schools” and “the goals of public education.”

Well, according to the Fraser Institute’s Executive Vice President, the school rankings are actually a tool in the Institute’s “communications agenda,” part of a strategy designed to “convince people” there’s a “problem.”

Asked about education reform – usually a code word for publicly subsidizing private schools in Tea Party circles – Clemens pointed to the Institute’s school rankings as a good example of how to “set-up your research agenda and your communications agenda.”

“I guess the million dollar question is how do we achieve those goals without looking like we’re quote-unquote ‘attacking teachers’,” asked one audience member interested in “education reform.”

“How do you win the argument on that in terms of public awareness?”

Clemens replied that “in terms of Fraser’s approach, we have … a framework.”

“The first stage is that my wife – who’s not political, not ideological, she just wants a better life for our kids – the first stage is she doesn’t even know it’s a problem. So the kind of studies that we’re going to do have to be easily accessible for her to understand in a minute that there’s a problem.”

“We, for example, have been doing school report cards for 16 years at the Institute trying to highlight real problems in schools,” Clemens elaborated.

“Stage one is you’ve got to convince people it’s a problem. Stage two is people are starting to get it’s a problem and you had better start doing work on what the heck the solution is.”

“If they don’t know it’s a problem,” Clemens explained, “they’re not interested in a solution.”

Given Clemens also told the Atlas Network event that private schools deliver “lower costs and better results,” is it any wonder what kinds of solutions the Fraser Institute has in mind?

The British Columbia Teachers Federation says the Fraser Institute’s “unscientific and misleading school rankings” have “no credibility in the educational community.” The rankings are based on the “blatant misuse” of the Foundation Skills Assessment test, “which is not a reliable method of measuring” the “individual progress” of students.

“We greatly appreciate that the public at large, and certainly a broader parent community, looks at those rankings and puts a lot of stock in them. We do not,” Patricia Dawson, head of Vancouver’s Crofton House School, told the Globe and Mail last year.

Both York House and Crofton House schools tied for number one on the Fraser Institute’s 2016 school rankings.