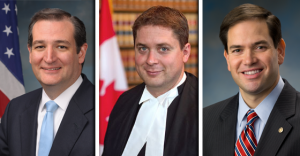 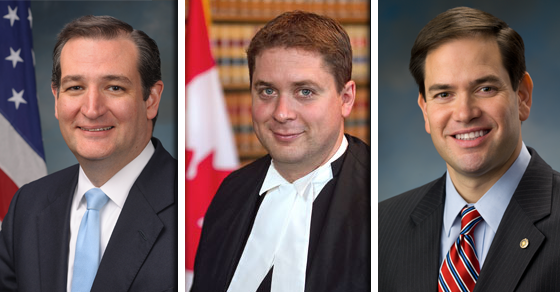 Conservative MP Andrew Scheer, the former Speaker of the House of Commons, had glowing words for Republican presidential candidates Ted Cruz and Marco Rubio, calling the pair “strong conservative voices” who are making a positive “impact” on American politics.

Scheer was moderating a breakout session Friday on “building a conservative coalition for victory” at the 2016 Manning Centre Conference in Ottawa.

Introducing former Republican Senator Jim DeMint, a leading Tea Party figure who once called for a ban on gay teachers in public schools, along with any unmarried women who are “sleeping with her boyfriends,” Scheer suggested Canadian conservatives could draw inspiration from their Tea Party cousins as they look to rebuild the conservative movement.

“How do we do that?” Scheer asked. “How do we take what we know to be right and package that together and explain it to people?”

The answer to that question, apparently, is by taking pointers from a Tea Party insider who “played a very key role in ensuring strong conservative voices like Marco Rubio and Ted Cruz are able to make an impact.”

Good to know Scheer’s “true colours can come out” now that he’s no longer Speaker, though!

Photo: House of Commons, US Senate.