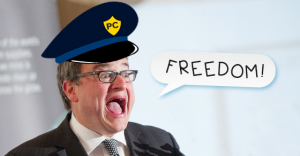 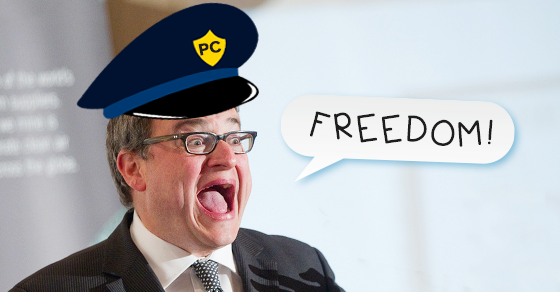 A veteran journalist was fired from The Rebel, a right-wing website owned and operated by conservative commentator Ezra Levant (who would like you to believe he’s a champion of free speech and journalistic integrity, by the way), because the journalist did not display the correct “political identity.”

“I think you’re off brand with The Rebel,” Levant told veteran journalist Michael Coren in his termination e-mail, dated March 1, 2015.

“Your larger political identity” is “confusing our audience,” Levant elaborated, adding that “an important part of The Rebel – in both commentary and activism – is to be a champion for social conservatives and Christians; at least that they ought to be welcome in the public square.”

“In my judgment,” he concluded, “we need to take a break from your brand.”

But as Coren tells the story, “I was let go after I wrote a pro-sex ed article.”

Coren boasts a long career as a nationally syndicated newspaper columnist, even hosting two television talk shows (including one on the now defunct Sun News Network, alongside Levant).

At the time, he also identified as an “orthodox and Catholic Christian” (though he later jumped to the Anglican Church).

Yet all traces of Coren’s journalism would be scrubbed clean from Levant’s newly created Rebel website after Coren penned a column for the National Post titled Why critics of Ontario’s new sex ed curriculum are wrong.

@1236 @ezralevant Not a problem. Here’s the original column. I stand by every word:https://t.co/LgDfPgvccK

Levant suggested Coren’s column offended The Rebel’s core audience, telling Coren “your column about the motivations and nature of critics of the Ontario sex ed curriculum hurt many of our supporters.”

He even alleged Coren “attacked them ad hominem,” though Coren says there was no ad hominem attack.

Coren’s column does debunk some of the more outlandish arguments against the sex ed curriculum and, at one point, suggests some critics “have not read the document” and “are opposed to pretty much any sex education outside the family.”

Coren’s column also points out critics “frequently complain that the new teaching exposes children to homosexuality” and “there is the fact that Ontario Premier Kathleen Wynne is gay and as much as it might be denied, I can assure you that some of the leading and loudest opponents of the curriculum have never been comfortable with her being a lesbian.” Coren also criticized the “pernicious and irresponsible” allegation that the curriculum was designed by convicted pedophile Ben Levin, with “the implication made by many critics that it’s all about prematurely sexualizing and grooming of children.”

One day before his column, Levant himself stated in a Rebel video that “it feels like the fingerprints of Ben Levin are over this … when you look at it through that lens – of course – you’re teaching young boys and girls to be sexually available. How can that not be such a flashing red light for everybody?”

After purging Coren from The Rebel, Levant would continue floating conspiracy theories suggesting the curriculum had been designed by a pedophile aiming to groom children for incest:

Not long before he was arrested, pedophile Ben Levin took the current Deputy Minister of Education out to a Jays game http://t.co/lkVPekY2HC

Coren labeled this kind of reaction as “hysterical.”

In fairness, Levant might reply that he was simply on brand with The Rebel.

Here’s the full text of Levant’s e-mail to Coren: Levant tweeted the e-mail Sunday in response to allegations Coren had been fired to suppress his views on same-sex marriage, something both Levant and Coren deny.