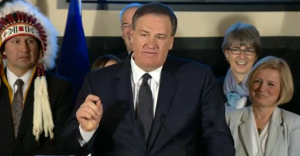 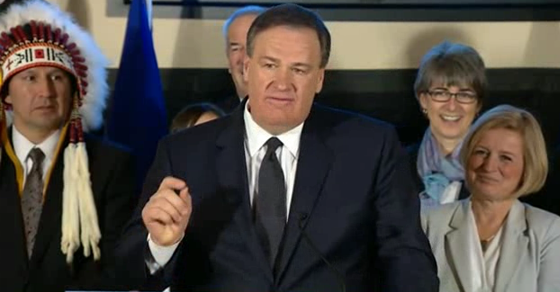 Despite the doomsday predictions by conservatives, it turns out even Alberta's captains of industry are down with the province's ambitious new Climate Leadership Plan.

Despite the doomsday predictions by conservatives, it turns out even Alberta’s captains of industry are down with the province’s ambitious new Climate Leadership Plan.

Here is one example.

Speaking on behalf of Suncor, Shell, Cenovus and his own CNRL, Edwards gave the oil industry’s blessings to the plan, saying it is a “significant step forward for Alberta and the industry” that will “enhance Alberta’s global reputation” as a “climate leader.”

Why the change of approach?

Well, considering all the set-backs they’ve had, the energy industry now appears to recognize the antagonistic approach championed by conservatives in the past has been spectacularly unsuccessful.

Earlier this month, Premier Rachel Notley noted that “the failure of those former governments to understand the challenge posed to the world by climate change, and to do our share to address it — have become one of the energy industry’s biggest problems.”

The energy industry seems to agree.

“For too long, we’ve been in a polarized debate about energy,” said Enbridge CEO Al Monaco. “This new collaborative approach proves that we can find common ground to protect our environment while ensuring we meet our collective need for energy in a sustainable way.”

Meanwhile, the Canadian Association of Petroleum Producers said the new plan will “enhance the reputation of our sector” and acknowledged “environmental credibility” is key if the industry hopes to “expand market access nationally and internationally.”

On the flip side, the Pembina Institute says the plan “ensuring renewable electricity is a big part of the replacement generation is perhaps the most important thing the world can do to avoid dangerous climate change” and Clean Energy Canada adds will send “a powerful signal to the market that will drive long-term investment in Alberta’s renewable energy resources.”

If conservative critics want to push back against this new sustainable approach, they might start explaining why their own policies didn’t work in the first place?