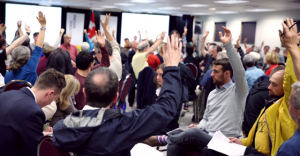 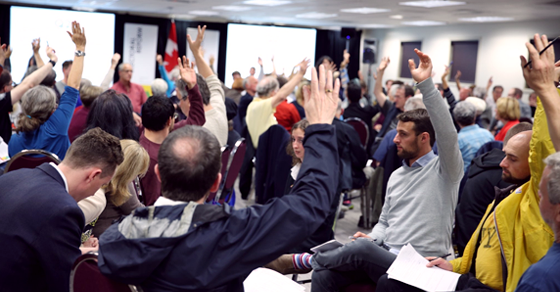 Looks like Canadians are hungrier for change than Justin Trudeau thought.

Looks like Canadians are hungrier for change than Justin Trudeau thought.

Earlier in October, Trudeau faced criticism for comments suggesting Canadians no longer had any appetite for change, leading many to conclude he was setting the stage to flip flop on his promise to bring in electoral reform.

Trudeau told a Quebec newspaper that since the Harper government was defeated, Canadians no longer have “the motivation to change the electoral system” because “they now have a government they’re more satisfied with”:

“Under Stephen Harper, there were so many people unhappy with the government and their approach that people were saying, ‘It will take electoral reform to no longer have a government we don’t like’. But under the current system, they now have a government they’re more satisfied with and the motivation to change the electoral system is less compelling.”

But it turns out only a week earlier, Trudeau submitted a report on a town hall he held in his own riding that found most of his constituents do have an appetite for change – in fact, Trudeau’s own report states “most were favourable to the idea of a proportional and mixed-proportional voting system.”

And it looks like the people of Papineau aren’t alone: the same members’ reports filed by Conservative MPs show a considerable appetite for change in Conservative-held ridings across the country too.

According to a report submitted by one Conservative MP, there’s “certainly an appetite for change,” pretty remarkable considering the Conservatives have gone to great lengths to obstruct multi-partisan efforts at changing the status quo.

Here’s a sampling of some of what Conservative MPs said they heard:

According to a multi-partisan report on a London, Ontario town hall featuring “over 300 participants” that was submitted by Conservative MP Karen Vecchio along with three Liberal and NDP MPs, “a substantial majority of Town Hall participants had a strong desire to see electoral reform.”

Not only did they observe an “appetite for change,” they also noted a desire to “move towards a more proportional system”:

“There was certainly an appetite for change toward a more proportional system in translating votes into seats. While no clear preference was apparent, the MMP open list option received notable support across all the breakout groups.”

The report adds that constituents voiced concerns about the “inclusivity of the present system and the degree to which it reduced citizen engagement and voter interest” while they felt “proportional representation represents the Canadian value of diversity and multiculturalism” and that “PR represents the rule of the people and is more reflective of all citizen votes.”

According to Miller’s report, although his constituents are “generally satisfied” with the status quo, “there are some in Bruce-Grey-Owen Sound that would like to see the electoral system reformed to better reflect the views of all voters.”

“Most notably,” Miller points out, is “support for a system of Mixed-Member Proportional representation.”

Likewise, Conservative MP Bruce Stanton reports many constituents in his rural Ontario riding expressed the feeling that unless they supported the Liberals or the Conservatives, “their vote has never counted” under the current first-past-the-post system:

“In a riding like Simcoe North, which has alternated between Liberal and Conservative MPs, supporters of other parties don’t feel as though their vote has an impact or is represented. Indeed, a number of people commented that they felt like their vote had never counted.”

Stanton adds there was widespread feeling that “we should try to improve our electoral system” and noted “considerable support for different variations of Proportional Representation.”

Meanwhile in Alberta, Conservative MP Garnett Genuis says his constituents are evenly split between “the status quo” and “a somewhat more proportional system.”

“Those who wanted change to the status quo almost all advocated for a mixed-member proportional (MMP) system, with a threshold, and which did not give full discretion to parties to draw up their own lists.”

And over in Sarnia-Lambton, Conservative MP Marilyn Gladu reports her constituents “expressed satisfaction” with the status quo, but admitted that another “frequently expressed preference was for a form of proportional voting.”

Gladu says she saw this sentiment at a town hall in Sarnia:

And during another town hall in Camlachie, Ontario, some constituents told Gladu that the current system is producing distorted results:

“Although they had not settled on a choice of alternative, most preferred the Mixed Member Proportional model … The reason they don’t like the First Past the Post System is that 18 times out of the last 22 elections, it has produced a majority government that got less than 39 % of the vote (which, with voter turnout could be less than a third of Canadians).”

If these official reports are anything to go by, it sounds like Canadians are hungrier for electoral reform than Trudeau thinks.