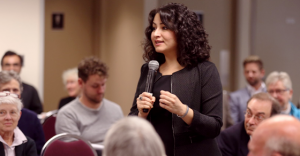 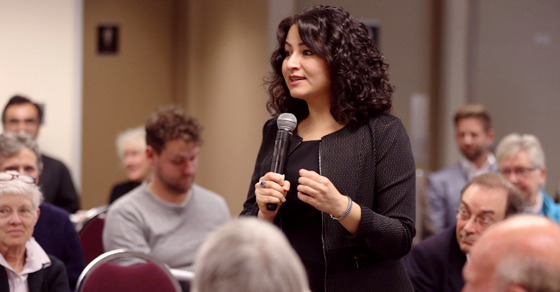 Video shows the Democratic Institutions Minister telling a packed town hall that "people aren't clinging for change the way that they were under the former government."

Maryam Monsef might want to rewrite her talking points.

Last week, Canada’s Democratic Institutions Minister played down the “appetite” for change when she told an electoral reform town hall in Victoria, BC that their enthusiasm wasn’t shared by the rest of the country.

“What he said was these rooms, this room is full right now, but I gotta tell you in most rooms across the country it hasn’t been standing room only, people aren’t clinging for change the way that they were under the former government.”

Monsef repeatedly stressed that “there is no consensus” because “most rooms are different,” something the minister confessed “makes my job very, very difficult.”

Volunteers from the group gathered data at electoral reform town halls across Canada over several months, noting things like the number of speakers and what positions they advocated for – data Monsef avoided providing herself:

“Although Minister Monsef routinely conducted straw polls on issues such as mandatory voting and online voting in town halls on the road, she did not do the same regarding support for proportional representation.”

You’d think Monsef would want to show some good data to support her claims rather than randomly pull anecdotal evidence out of thin air?

For example, Monsef keeps floating this idea that that the “appetite for moving to PR” is “different” across the country:

“In this room, there’s a lot of appetite for moving to PR … Most rooms are different. There hasn’t been a consensus on any specific system.”

But instead the data suggests the majority of speakers at over two-thirds of electoral reform town halls held across Canada actually advocated for some form of proportional representation.

By contrast, the majority of speakers at only 5% of town halls said they want to keep the status quo.

A town hall hosted by Trudeau in the Prime Minister’s own riding found a majority of constituents in Papineau were “favourable to the idea of a proportional and mixed-proportional voting system.”

And what about this line from Minister Monsef?

“I can’t promise you that I’ll be advocating for PR because I haven’t heard that from an overwhelming majority across the country.”

In fact, 87% of individuals who spoke at electoral reform town halls across Canada advocated for a proportional system.

It’s unclear why Monsef can’t recall hearing these speakers – not to mention why she wouldn’t consider nine in 10 speakers to be either a “an overwhelming majority” – but a consensus would likely agree that’s a pretty big number.

And what of Monsef’s suggestion that they’ll need to leave the question in the hands of a parliamentary committee because ordinary Canadians can’t make up their minds?

“That actually makes my job very, very difficult. It puts more emphasis on the work of the committee because now they have to find the consensus that they couldn’t find in the country.”

Good thing the committee can also rely on the expert testimony of witnesses who appeared before the parliamentary committee on electoral reform.

It turns out “88% of expert witnesses who expressed a preference called for proportional representation.”

By contrast, only 4% of experts shared Trudeau’s stated preference for a ranked ballot – for her part, Monsef says she’s still “arriving at a preference.”

And although Monsef told a town hall attendee that she doesn’t recall hearing many people speak up in favour of proportional representation, FVC says that PR was “the main issue for most” at 14 different town halls the minister personally organized across the country.

As one FVC volunteer observed of Monsef’s Victoria town hall:

“The wheels were skidding out of control … Maryam Monsef, the Minister of Democratic Institutions hosted the gathering in Victoria billed as ‘the last chance’ to give your input. But the tone of the meeting was quite acrimonious. They were clearly managing the message while backpedaling from an election commitment about changing the electoral system.”

“If conversations like this were happening during the summer of last year,” Monsef replied, “you can bet anything these rooms would be packed and people would be asking and demanding for change.”

“They might be in four years,” shouted a woman from the back of the room.